The King has been part of the problem, and has systematically destroyed the very possibility of being part of any permanent solution in Nepal. India and the rest of international community have only themselves to blame for their response, or the lack 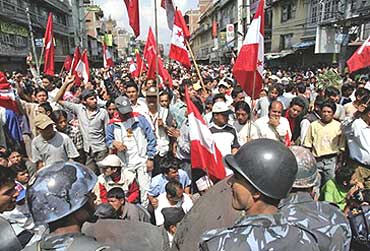 The King’s latest gambit – a reluctant offer to allow the agitating Seven Party Alliance (SPA) to nominate their Prime Minister and join a ‘national government’ – has predictably and rightly provoked contempt and fury in the Nepali street. The King offered nothing that could have been acceptable to the SPA and, more importantly, to the people who have now clearly gone beyond party campaigns and affiliations to directly challenge and reject the monarchy in what is increasingly taking the shape of a people’s revolt. Indeed, it should have been clear that, since May 22, 2002, when he dissolved Parliament, and acutely since the February 1, 2005, ‘King’s coup’, in which he seized direct power, the King has been part of the problem, and has systematically destroyed the very possibility of being part of any permanent solution in Nepal.

It is a measure of its absolute distance from the situation on the ground in Nepal, that the international community – particularly India, the US, UK and the EU – chose to ‘welcome’ the King’s worthless offer as a "step in the right direction", and to exhort the agitating political parties to end their movement and join the government. The delusional quality of the international response is, however, entirely consistent with the record of the recent past.

Indeed, as Nepal spirals into what appear to be the penultimate disorders preceding the end of the monarchy, there has been a flurry of diplomatic activity, with India in particular, but other concerned powers as well, striking dramatic postures, exhorting the King to greater sagacity and restraint, and demanding a return to ‘democratic’ norms. In this, it would seem, these governments have been given more to theatre and appearances, than to any concrete perspective or prospect for corrective action, and are attempting to salvage with mere words and pretence, a situation that has long been lost to the lack or infirmity of actions.

India and the international community could have enormously empowered democratic forces in Nepal 14 months ago – or even earlier, when the King dismissed Parliament, hiring and firing a succession of governments after 2002 – by exerting irresistible pressure on Kathmandu to immediately restore the integrity of constitutional democracy. A clear model for such pressure existed in the Indian blockade of 1989, which forced King Birendra to introduce multi-party democracy in the country. But they chose, instead, to restrict themselves to the symbolism of interrupted military supplies and partial withdrawals of economic aid, even as political parties were progressively marginalised and eventually driven into an alliance with the Maoists.

Significantly, moreover, the agreement between the SPA and the Maoists was secretly brokered by Indian agencies – and to this extent, India has directly contributed to the escalating crisis in Nepal. Unfortunately, this was done in the absence of a clear game-plan, and under what may prove to be misplaced confidence in the notion that the Maoists are, in fact, engaged in a good-faith process of negotiations with the powerless political parties, and would be willing to join in a democratic process which their ideology unequivocally rejects as a ‘bourgeois-comprador’ corruption of the ‘people’s democracy’ that they seek to impose ‘through the barrel of the gun’.

The Indian state has, in the past and within the Indian context, entirely misjudged the Maoists’ commitment to their own radical ideology, and grossly overestimated their willingness to arrive at compromises. There is no reason to believe that the much stronger Maoist movement in Nepal would be willing to embrace any remarkable compromises, particularly at a time when events in that country are so clearly following a trajectory that they have scripted.

Indeed, India’s recent posturing is particularly embarrassing, as it pretended to take up a ‘leadership role’, sending special envoys to intercede with the King and the parties, and attempted to share, if not take, credit for the King’s inevitable, and evidently worthless, ‘concessions’. The fact, however, is that the King’s limited ‘concessions’ did not come as a result of anything India chose to say at this juncture, but are, rather, a response to the unmistakable message of the Nepali street.

What is insufficiently understood in all this is the degree to which the initiative has been relentlessly held by the Maoists since the Dang attack in November 2001, when they decided they were strong enough to take on the Royal Nepalese Army (RNA). All other parties to the conflict, domestic and foreign, have, since then, merely been reacting to the realities of the ground created by the Maoists.

Over the past fourteen months since the King’s coup, moreover, the RNA has essentially ‘hunkered down’ in defensive positions, basically protecting urban concentrations, and particularly the Kathmandu Valley, with little effort to challenge the Maoists in their areas of domination in the rural hinterland. A review of incidents of violence over this period demonstrates that an overwhelming majority of fatalities have occurred during Maoist attacks on Army and Police posts, camps, establishments and transports, or on government facilities in well protected urban settlements.

The truth is, the King is fighting an un-winnable war, and was apparently gambling on the inevitable exhaustion that he hoped would result from a long drawn out confrontation, with Royalist forces holding on to the urban areas, abandoning the countryside to the Maoists. The error of such an assessment is twofold: for one thing, exhaustion works both ways, and does not necessarily benefit a passive state; for another, there can be no strategy of permanent defence: if the initiative is constantly held by the more aggressive anti-state force, a necessary process of ‘nibbling expansion’ eats away at the vitals and capacities of passive defence.

Nevertheless, the Maoists also lack the armed strength to ‘sweep down the hills’ and ‘take Kathmandu’ in positional warfare, engaging the well trained and better armed RNA in a conventional confrontation. The end, consequently, if it was to be brought about within the foreseeable future, had to come, not through some dramatic military confrontation at the gates of Kathmandu, but through a combination of demonstrations, disruptive activities, blockades and targeted violence. It was within this scheme that the exhausted political parties found a role, as Baburam Bhattarai, the Maoists’ ‘ideologue’ expressed it, because "the historical necessity and the new objective reality of the country is that the new ‘two pillars’ of parliamentary and revolutionary democratic forces join hands to uproot the outdated and rotten third ‘pillar’ of monarchy". This is, in essence, a marriage of convenience, and will last as long as the common enemy, the ‘rotten third pillar’, survives. But ‘revolutionary democracy’ is just as irreconcilably opposed to ‘bourgeois-comprador’ parliamentary democracy, and this alliance will crumble swiftly in the wake of the collapse of the monarchy.

That collapse is now inevitable, though not necessarily imminent, as protests by the SPA bring out tens of thousands into the streets, defying curfew orders; and as the Maoists launch a coordinated campaign to defy the curfew, ‘capture’ highways, and break down royal statues across the country. Within the Kathmandu Valley, the Maoists have declared a ‘unilateral ceasefire’, but their war of attrition against the state’s forces continues in other parts of the country.

It has long been an urgent imperative that the issue of the imminence and character of the successor state in Nepal be addressed directly by both the international community and the people of Nepal. Politically correct slogans of a ‘Republic’ created out of a ‘negotiated settlement’ between the Maoists and the political parties militate against reality and the lessons of history. The contours of Nepal’s end state cannot, of course, be currently predicted with any measure of precision, but it is clear that the equation of power is overwhelmingly in favour of the Maoists, who may seize power either directly in the ensuing disorders, or through a temporary alliance with the ‘parliamentary parties’, exploiting democratic processes to neutralize or secure control over the one force that remains an obstacle to their absolute sway – the RNA.

The situation in Nepal is not yet irreversible, and concentrated international action to restore the integrity and power of parliamentary forces at Kathmandu, combined with a long-term strategy of recovery of the regions lost to the Maoists, remains a theoretical possibility. The agitating political parties will enjoy a flush of popular support and confidence in the immediate aftermath of a possible success, and this will create some space for consolidation in Kathmandu, and a transient shift in the equation of power, vis a vis the Maoists.

The role of the RNA in such a scheme, and its transformation into a National rather than a Royalist Force, is integral to the realization of such a possibility. Regrettably, whenever a proposal on these lines is articulated, the immediate response has been that this is ‘difficult’. This has been the core of the problem in addressing the conflict in Nepal, certainly since November 2001: realistic solutions are mechanically rejected as ‘difficult’; and those who ally themselves to the ideologies of freedom the world over, it would appear, are no longer willing to do ‘difficult’.

The enemies of freedom – the Maoists, the mujahideen, the warriors of assorted exclusionary ethnic fundamentalisms – however, are willing, even eager, to confront difficulties, and will, consequently, tend to prevail in the very long run within which their ‘protracted wars’ are conceived – and which democracies fail to acknowledge in their policy projections and paradigms.

As the Maoist script continues to be played out in Nepal, Kathmandu will probably be the first to fall. But others will follow.