'It is natural we would have to take a decision on the syllabi,' says the HRD minister, 'but only after a very careful consideration. The review would be done during next eight-ten days...' 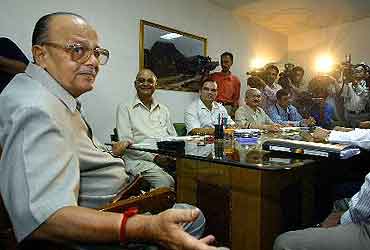 The full transcript of the BBC Hindi special programme Aapki Baat BBC Ke Saath -- with the new Human Resource Development minister Arjun Singh. The topic for the programme was:  Who benefits from the frequent changes in educational set-up and syllabi?

Nagendar Sharma: What purpose is served by the frequent changes in the educational set-up with the change of governments, especially the revamp of syllabi?

Arjun Singh: All I can say at this moment is that, unfortunately, during the last four-five years, there has been a large-scale tampering with the syllabi. Therefore it is natural we would have to take a decision on the syllabi but only after a very careful consideration. The review would be done during next eight-ten days, and only then would I be able to give a detailed and direct answer.

BBC listener from Munger: My question is direct. The previous NDA government went full steam on its saffronisation spree despite the protests by the opposition. Syllabi were changed, and they brought in text-books imbued with their ideology in the Saraswati Shishu Mandirs. Is the present government ready to do anything to relieve the students from this dilemma and save their future?

Arjun Singh: My submission is that the safeguards provided in the Constitution of the country and the law do not allow a specific thing to be removed immediately. Your question is important for us and I assure you that our government will find a way out. We would stop these attempts which were made by the previous government for ‘saffronisation’ of education. At the same time, we would ensure that the rights available to all in the field of education are not violated. But I need time for this.

Nagendar Sharma: India is passing through a difficult stage. When your predecessor, Dr Murli Manohar Joshi, convened a meeting of Chief Ministers on the syllabi, all the opposition CMs refused to implement the syllabi suggested by the centre,  alleging saffronisation. What path would you adopt to avoid confrontation?

Arjun Singh: There are some institutions in the country which are acceptable to all. During the previous government’s tenure, various chief ministers had raised the syllabi issue in the Central Advisory Board on Education (CABE). Instead of addressing the objections, the NDA government chose to make CABE a defunct body; its meeting has not taken place during last four years.

First of all, our responsibility is to restore the CABE, so that the matters which used to be raised democratically, are once again done in the same manner. The we would make the changes required in consultation with relevant people. We are open to this.

What I am saying is that the frequent changes in the syllabi, for considerations other than strictly academic, do not help. The experience of the NDA regime also clearly tells us the same. We would move forward with consultation; care and academic reasons would be priority for all purposes.

Nagendar Sharma: When your party was in the opposition, you had attacked the BJP-led government and had alleged saffronisation of education, but that government continued with its policies. Now there is a hint of review. Aren't all these reversals harming the students’ interests, endangering the future of the country?

Arjun Singh: Certainly, if such complete reversals continue, it would harm the students’ interests. That is why we need to have acceptable norms, and changes should be based on these norms. That is why I am saying that no step with regards to the educational-set-up of the country would be taken in haste. But it is clear that the ‘saffronisation drive’ is not in the interest of the country and it would have to be rejected--there is no other option.

BBC listener from Gujarat:  I would like to draw your attention towards the communal angle being added to the text-books of primary schools by the Gujarat government. Why should children of all faiths be forced to recite Saraswati Naman, Surya Naman, Guru Naman. Sanskrit as a language is fine, but why should students not have the option of studying Urdu and Persian etc?

Arjun Singh: The truth of the matter is that I do not  have complete information of what is being done in Gujarat schools, but what has been taking place there is disturbing. I would acquire entire relevant information and after going through facts, I would take action.

BBC listener from Delhi: Sir, the matter of Gujarat schools has been brought to your notice. Similar is the situation in your own state of Madhya Pradesh, where chief minister Uma Bharti bans magazines considered secular. What can we expect with the change of guard in Delhi?

Arjun Singh: Well, my worry is quite similar to yours. We would try to see that such situations do not arise again; and if they do. we would find a proper solution.

Nagendar Sharma: But Mr Singh what can be the solution? Constitutionally, the states are free to act in areas of their jurisdiction.

Arjun Singh: Yes they are free and independent to a large extent and in many matters. But at the same time there are certain norms, which no state government in India can bypass.

BBC listener from Jharkhand: Sir, the previous government started controversial courses like Jyotish and Karamkand, which are irrelevant. Would the present government continue with these? And if it does, would the UGC recognise such courses?

Arjun Singh: I don’t think that introduction and implementation of such courses was in the interest of Indian people, but changes would be brought about after careful consideration only

BBC listener from Jharkhand: Sir, one government comes and saffronises the education of the country, the next one says it would secularise it. How long would this continue? What about education linked to employment? What new can this government do from the past?

Arjun Singh: Linking education with employment and making it relevant to daily life was precisely the aim of the education policy which was brought about and implemented during the tenure of late Rajiv Gandhi, and I firmly say this is the only solution. In between attempts were made at making its implementation difficult, which have made matters worse. To remove such unwanted barriers is our priority, and I am hopeful that with the support of all, I would be able to do it.

Nagendar Sharma: But, Mr Singh, educationists of the country say this New Education Policy of 1986, has been there for almost two decades now, and there is a need for review to make it relevant for the new century.

Arjun Singh: It has been reviewed once in 1990-91, but at the same time it is true that Late Rajivji himself wanted this policy to be reviewed once every decade. This review is now due. We are drawing up an action plan, and by the end of the year, we would have to put this into action.

Nagendar Sharma: Mr Singh, a look at India’s educational set-up clearly shows that there is a dual education policy in India--one for the haves, who have access to everything since they can pay, and the other for the have-nots, those who are poor. Is it justified even after almost six decades of independence?

Arjun Singh: Certainly, there can’t be two roads. It is correct to say that the variety of education available at different levels is benefiting certain people, but our aim at the national level is to provide education equally for all. There can’t be any room for discrimination based on social strata. You have rightly pointed out in your question, and I tell you we have already covered a lot of ground on this issue, and I am hopeful that with the support of everyone we would be successful in providing uniform education for all--that would be our endeavour.

BBC listener from Delhi : Sir I am pained to say autonomous institutions like the Indian Council of Historical Research (ICHR) have been used by the previous government and funds were diverted for research on organisations like the RSS, and for tampering history. Is there any hope now with the change of government?

Arjun Singh: I respect your sentiments, and we would like to address all such questions which are being raised, especially with regard to tampering with such autonomous institutions. We would show urgency to remove all misgivings, but at the same time, I reiterate that all this would be done only once a proper review is done and the facts are before us. We do not want to act in haste and do anything unproper.

Nagendar Sharma: But Mr Singh, now the eminent autonomous, educational and research institutions as the ICHR, ICSSR, etc., have become a safe place for political appointments. Don’t you agree this is harming the cause of education in totality?

Arjun Singh: I am not in favour of political appointments. At the same time, one has to admit that certain individuals in politics today have earned a name for themselves in academics, and have done a lot in their field. Such cases could be understood. But appointments totally for political reasons, especially of those people who have no experience and are enjoying positions without any reason--that is totally wrong and unacceptable.

Nagendar Sharma: Is the new United Progressive Alliance (UPA) government considering steps to prevent political appointments and to restore the sanctity of such eminent institutions?

Arjun Singh: I think this is a universally acceptable norm, and to implement this is my duty, towards which I would make all efforts possible.

BBC listener from UAE : Sir, we are ashamed that even history has been distorted in our country. Education is becoming expensive and only the rich can afford it. Government schools are in a poor shape, primary school teachers are made to do all sorts of work--from census to electoral rolls preparation. Should the poor countrymen expect a change from the new government?

Arjun Singh: I agree with this listener’s impression, and I think that during the period after independence many efforts were made to provide opportunities for all, but the policies followed during the past four-five years have only confused the scenario and it has not helped at all. Now to come out of such an environment we would have to take concrete steps, which could also trouble a few people. But the government is eager to act and appeals for cooperation from countrymen.

Arjun Singh: I think that the basis of education should be such that these complaints do not arise at all. However, talking in practical terms, I have information that at some places such things, as pointed out by you, do happen. But without accurate and precise knowledge, it is difficult to act. What is important is that we instil a sense of confidence in people, have proper knowledge of matters concerned and then do the rectification work.

BBC listener from Zurich: Sir, I want to know what the new government can do about those studying abroad, and want to serve their country after going back? We have numerous problems, we don’t come to know about interviews, vacancies, and other related information, and our roots are weakened. What can we expect?

Arjun Singh : All rules that are there in the normal course are available to all, tell me what help you need and I would see what I can do.