Playing for pride after conceding the series, Dilshan and Arnold feature in an record unbroken sixth wicket stand of 131 to register a five-wicket victory. 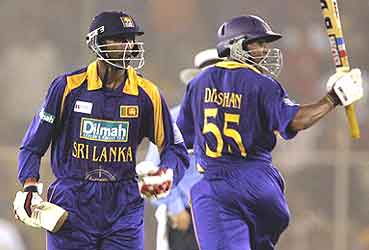 The Indian juggernaut was halted by a determined Sri Lanka who relied on a record partnership for the sixth wicket between Tillekaratne Dilshan and Russel Arnold to register a five-wicket victory in the inconsequential fifth one-day today.

Playing for pride in the day-night encounter after having conceded an unassailable 4-0 lead to India in the seven-match series, the Sri Lankans overhauled the daunting target of 285 with 14 balls to spare at the Sardar Patel Stadium.

Dilshan and Arnold featured in an unbroken partnership of 131 runs to nullify identical knocks of 103 by opening batsman Gautam Gambhir and skipper Rahul Dravid that propelled India to the stiff target.

Dilshan remained unbeaten on 81 from 67 balls with eight fours while Arnold was 49 not out from 47 balls with four fours.

The victory marked Sri Lanka's turnaround in the series in which they had been thoroughly outplayed until now.

Earlier, Gambhir and Dravid propelled the hosts to an imposing 285 for eight after Atapattu had put them in on a featherbed of a track. While Gambhir's maiden one-day hundred enabled India overcome early hiccups when they were three down for 69, Dravid's knock helped the team overcome a middle order collapse and accelerate in the closing overs.

It was a powerful statement of intent from the team that had rested its key players Sachin Tendulkar, Irfan Pathan and Harbhajan Singh.

Super Sub Farveez Maharoof claimed his career-best 4-20 to put the brakes but Dravid's stellar innings ensured a stiff target for the visitors.

Dravid posted his 11th ODI career hundred off the penultimate ball of the innings, a stand and deliver pull shot to the mid-wicket fence off paceman Dilhara Fernando.

After adding 128 runs for the crucial fourth-wicket stand with Gambhir, Dravid produced a late flourish that fetched the team 50 runs off the last five overs.

Gambhir, playing in his first ODI in two and half years, celebrated his return to the team with a rollicking 103 that came from only 97 balls and contained 13 fours and a six.

After racing to 43 in first five overs, India lost Sehwag (19) and Mahendra Singh Dhoni (0) to Nuwan Zoysa off successive balls. Then followed a brief period of calm when Yuvraj Singh prodded for 21 balls for his three runs before mistiming an on-drive straight to Mahela Jayawardene at mid-wicket off Chaminda Vaas.

Dravid did not take long to get into his groove. He got his first four via a perfect straight drive off Vaas cutting Fernando through point region. 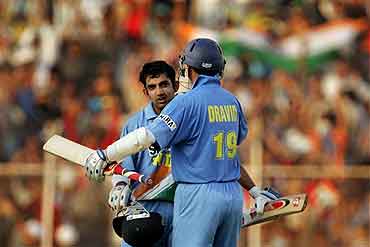 His captain's poise encouraged Gambhir to return to his natural strokemaking elements and an off-colour Fernando turned out to be the right target.

Gambhir reached his half-century with a pull to mid-wicket off the right-arm fast bowler and then slashed another one through the off-side.

It was the first time since his 71 against Bangladesh during his debut series in Dhaka in 2003 that Gambhir had gone past the 50-mark.

Soon, he went past his previous best. A nervy top edge while trying to pull Fernando, took him to 99 and he reached the three figure mark with a single off Russel Arnold.

Maharoof helped break the Gambhir-Dravid partnership, with Atapattu coming up with a one-handed catch at short mid-wicket to end left-hander's innings.

Maharoof then removed Venugopala Rao (6), Suresh Raina (13) and Ajit Agarkar (4) in successive overs to dry the run flow. But the Indians picked up the momentum again towards the end through a 32-run stand between Dravid and Murali Kartik (8). The visitors' hopes of overhauling the daunting target were dented early when they lost Sanath Jayasuriya once again cheaply.

Kumar Sangakkara (39) was dropped on two by Gambhir at first slip but that was about the only blemish in an otherwise sparkling fielding performance by the Indians.

Dravid remained in the dressing room during the most of the Lankan innings to receive treatment for cramps but the players performed with even more vigour under Sehwag.

The direct throws disturbed the timber with amazing precision and the catching did not lag behind too.

After the Jayawardene-Atapattu stand, which ended with the latter's return catch to Kartik, Dilshan and Arnold launched a late fightback.

Coming together with 131 runs needed from 20 overs, the duo went about their task with a cool head.

They surpassed the previous best for the sixth wicket of 94 by Dravid and Sanjay Bangar against the West Indies in 2002-03.

Dilshan brought up the winning runs with a nudge to third man off Agarkar.

India Raising The Bar All The Time