How could this sindoor wearing, bahu-idol be the boss of of the self-styled 'liberated' and radical' cool set? That's the real problem the academic ayatollahs and elite have with Irani. 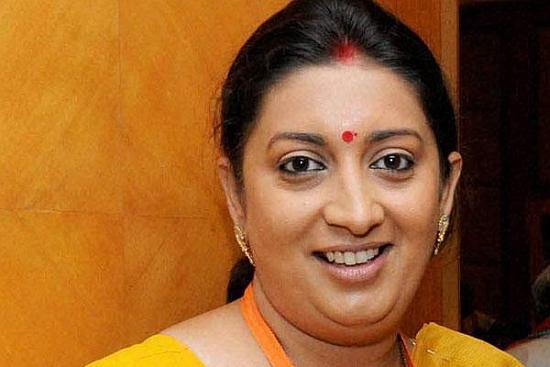 Smriti Zubin Irani, the human resource development (HRD) minister in the union government, is presently at the centre of a ‘controversy’ with regards to her formal educational qualification. According to her 2014 election affidavit, in 1994 she passed the Part I examination of the Bachelor of Commerce degree course offered by the School of Open Learning of the University of Delhi. In short, she started a Bachelor’s degree programme by correspondence but did not finish all the requirements for the degree.

Big-word big-degree angrezi types have pounced on her appointment and have summarily declared her unqualified for the position. Correspondence college, B.Com dropout, 12th pass— these have been used as abuses as well as reasons for her disqualification. Ajay Maken, one of the many general secretaries of the Congress party, also deemed her unfit for the job. There is another controversy about the apparent mismatch between her declared educational qualifications of 2004 and 2014 as well, but I will not go into that.

Smriti Irani, in turn, has declared that she wants people to judge her by her work. And that she must be, very closely. Policies matter— way, way more than the policy-maker’s credentials.

This tirade against her is but Brahminism by another name— a sophisticated urban-Anglicized version of it. It is important to note that no other appointment has been questioned and grilled so intensely on the basis of ‘qualification’ or lack thereof.

So, for being the minister for agriculture, you do not have to have agricultural experience, for urban poverty alleviation, you do not have to have the lived experience of being an urban poor in the subcontinent and so on. Indeed, it would seem, generalists can do all that but not human resource development. This ‘brahmin’ profession needs ‘specialists’. This is where formal degrees and certificates from others help you take decisions. Not anyone can do that. Agriculture— anyone can do that, or can they?

On a different note, the most brahminised group of them all, the brown Marxists, have a hallowed tradition of outsourcing decision-making power on questions of education from the legislature to the party faithful. HRD is exactly that kind of ministry that a total-control ideology type of care-based party with a long-term vision wants to control. The minister is important only to an extent.

There seems to be serious lack of understanding about what HRD ministry has in its ambit. For starters, it includes much, much more than university education— the sector whose stakeholders are making the most noise. The HRD ministry looks after primary education, adult education, literacy, scholarships, distance education and much more. Those are ‘details’ which the predominantly high-caste beneficiaries of the central governments’ university education subsidy system don’t deign to ever investigate. Their ideology is exposed by what one chooses to see and what one chooses not to see.

As far as Smriti Irani’s profile goes, her trying to get a bachelors degree while working (a scenario faced by millions), her dropping out of the degree (another scenario shared by millions), is not the typical trajectory of the academic type born into a privileged high-caste Hindu or Muslim family. Her correspondence course enrolment and later discontinuation also means that she is not a big beneficiary of metro-centric higher-education subsidies that are designed to shower privilege on the already privileged classes and castes. It must be said, however, that beyond these details, in terms of her socio-economic profile, today’s Smriti Irani doesn’t share much with the majority of the millions upon millions who constitute the human resource pool of the present and the future. But then neither do her critics. In terms of aspiration and values, the minister and her critics may well be closer to each other than is apparent in the public spectacle around her. This mock-divergence is useful for both— for obvious reasons.

The politics of symbolism has serious currency in all human assemblages as they signal something. Whether the signal is followed up by substance is another issue. About 4 out of 5 citizens of the Indian Union are classified in the census as ‘Hindu’. The present cabinet has more women— women whose foreheads and hair-partings look like millions of women of their age in this nation. In this superficial sense, they are representative to an extent. The aspects in which they are non-representative are what they share with their critics.

What is remaining unsaid by the academic elite, who spend their time in their classrooms and otherwise brain-washing young adults into notions of ‘liberty’, ‘radicalism’ and ‘choice’, is that a large part of their contempt for Irani comes from this sindoor wearing, bahu-idol becoming the boss of those who hate the sindoor, the family, family relationships and other such 'conservative' things.

In their brainwash factories of ‘free choice’, Smriti Irani’s public get-up is anathema— a reminder of everything they spit on as part of their ' liberated' mannerism package. This perturbs most students and young people who have not been ‘educated’ enough to hate sindoor and evolve into ‘sophisticated’ beings. Which is perhaps why they end up seeing these vainglorious social pariahs as privileged aliens who indoctrinate from the perch of super-subsidized campuses.

These lifestyle-as-politics-wallahs deliberately create a culture of inferiority among the socially rooted, favour the ‘liberated’ amongst their students and ‘prefer’ them for various things and seek to convert the rest. The signal is clear. It is not enough to be formally educated. It is important to share the hatred of everything that is rooted, that you inherited from your family and society. Then only can you be ‘truly’ educated. And once you are truly educated, you will start acting like one and also looking like one, from a mile.

But one who looks exactly the opposite of this prototype now will sit over the head of this legion. That is the rub. Their jaw-muscles harden at that thought. Powerlessness hurts, especially the type that puts the societal isolation and alienation of the liberated and educated on public display. Anxieties about marginal loss of privilege and serious loss of influence are quite serious. The shrillness of their Irani-bashing reflects this.

Smriti Irani (Kshatriya father, Brahmin mother) is more self-made than those from similar caste backgrounds who get all the benefits of a communitarian upbringing, inherit its social capital, and then kick the society in its face with their superficial rebellious symbolisms. Their social capital remains conveniently intact. Burning sacred-threads and other ‘renunciation’ and public ‘de-class/caste-ing’ spectacles of this type cannot destroy that. Much like the aatma.

Smriti Irani wears the sindoor on her hair parting (shithee as we call it in Bengal). She is not publicly known to wear an intrinsic contempt for a majority of the society and its values on her sleeve, her speech or body-parts. That, to the privileged class of the radical and the rootless, is a problem. The outrage about her educational qualifications is a sideshow.

The City of Blooming Promises