'Kashmir Is Not The Core Issue'

The foreign minister says silence is expressive enunciation and spells out the Indian position without taking too hard a line. Edited Excerpts. 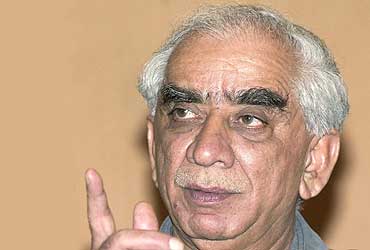 India's Agenda? Why the reticence to talk when Pakistan has virtually launched a blitzkrieg?

Silence is expressive enunciation. We don't have to articulate our views day in and day out.

Is Kashmir the only issue for the summit?

We are not agreeable with Pakistan that Kashmir is the only issue. We will like to discuss all issues. We are never shy of discussing the Kashmir issue with Pakistan and have no difficulties in this regard.

We do not have any set of proposals on Jammu and Kashmir for the Agra Summit. We hope both countries would address the totality of relations.

There is the 1972 Shimla Agreement and 1999 Lahore Declaration. If such bilateral agreements are sought to be made irrelevant, there would be no stability in international relations. Pakistan had accepted the composite dialogue process and it should not be abandoned.

No single issue would dominate the summit talks as a composite dialogue process is already in place encompassing a number of issues. I am astonished now that there should be a suggestion that those be abandoned.

So if not the only issue is it the core issue then?

Kashmir is not the core issue. It is at the core of the Indian nationhood. We don't believe in denominational nationhood, but in a civilised nationhood.

So why talk now that cross border terrorism has not stopped?

India has never said it would not talk to Pakistan on Jammu and Kashmir. The question of promotion of cross border terrorism and targeting of innocents is part of the Kashmir problem.

Time does not stand still. It has been our constant endeavour to continue the process of dialogue and reconciliation to ensure lasting peace in the region.

India has always said the process of dialogue should continue and we believe and will continue to endeavour because for peace there is no other alternative.

Dealing with the man who was behind the Kargil conflict.

We have always endeavoured to move beyond experiences of history. Neither nations nor people....they cannot stand still.

India has always stood by the process of dialogue and reconciliation. We will continue to endeavour for this as we see no alternative.

decision to stay away?

Extraneous elements are being brought up in the run-up to the Agra summit. The government has made its position clear on the question of Hurriyat leaders meeting Musharraf. We cannot keep making it clear ad infinitum

India has expressed strong reservations on the planned meeting and has described it as a non-issue. Government will observe all due protocol expected for this event. All due conventions and protocols will be observed during the ceremonial ceremony when Gen Musharraf arrives at the forecourt of the Rashtrapati Bhavan.

What exactly does he mean by Protocol?

NDA boycott - an embarassment to the Government?

Since elected representatives from J and K have not been invited for the tea party, the NDA is justified in taking such a step.

Would the shadow of the Hurriyat loom large over the summit?

A shadow has been cast much more by he media. I have never seen any shadow in this

India is very clear on a composite dialogue with Pakistan and there are eight Confidence Building Measures including on trade issues, Siachen, terrorism, narcotics and Jammu and Kashmir.

This (composite dialogue) has been our priority and it is clear. It is upto Pakistan to have their priority.

The DGMOs of the two countries would meet after the Agra summit since they did not have enough time to take preparations for their meeting. India has proposed CBMs on both conventional and nuclear warfare, which the DGMOs would discuss.

What about the situation along the Line of Control and Siachen?

The DGMOs would discuss these issues when they meet.

It was India and not Pakistan which had referred the J and K issue to the UN in 1948 and Pakistan subsequently converted it into larger question of Indo-Pak relations.

The UN Security Council resolutions stipulated ceasefire, truce and vacation of all troops from the whole of J and K and only thereafter the question of plebscite or referendum arose

Snce the first two points were never fulfilled by Pakistan, the third one (referendum) did not come up.

The Valley alone is not Kashmir. What does Pakistan mean by Kashmir? Are you talking also about Ladakh and the Jammu areas. There are also the Northern Areas which have been illegally and wrongly taken over / ceded by Pakistan. Northern areas are not even taken as part of PoK.

The question of referendum simply does not arise. Even Secretary General Kofi Annan had stated that the UN resolution of 1948 in this respect was not enforceable.

Could be any progress in the summit in view of the position taken by both the countries?

I am not at all pessimistic.Both countries should approach the talks with realism and move forward step by step instead of seeking dramatic breakthrough

The minimum and maximum expectation from the summit?

It is for the two heads of government to decide what it should be.

On Musharraf's offer of a No-War Pact

India had proposed a No-War Pact as early as 1947 and subsequently both the countries have been proposing either a no-war pact or no-agression pact at various points in time.

The Prime Minister has said he would not be averse to a no-war pact and indeed would welcome it. But, a no-war pact should be comprehensive to include issues like cross-border terrorism and proxy war. Without these issues, it could not be called comprehensive. Peace is not possible in the face of conflict and war.

We will examine it positively if full consideration of cross-border terrorism, proxy war and militancy is given. We can discuss non-aggression or no war pact and implement it if we can consider all these issues.

India favours a Comprehensive No-War Pact that would address proxy war, cross border terrorism and clandestine war. Without these issues, such a pact would not be meaningful.

We have time and again taken up this issue with Pakistan ..... we have again taken it up now During the Lahore process, the two governments had decided to depute Ministers who would visit the jails in each other's countries to sort out the matter.

In fact, we had prepared schedules of these visits. But unfortunately, that government (of Nawaz Sharif) is no more. The government is aware of the concern and sentiments of the families of the numerous POWs and we will continue to pursue the matter

The question of applicability of the Geneva Convention applies only if we first agree that there are any prisoners of war.

Invite under US Pressure?

There has been no US pressure on us as would be evident from the sequence of events since the Pokhran testing. Such charges are propaganda by terrorist organisations like Lashkar-e-Toiba that New Delhi had embarked on the step as its army was tired of fighting the militants.

This would run the risk of their agenda being imposed on the two countries. This will complicate the matter and destabilise the region, rather than solving it.

India will not stand in the way of it coming into force.

The recent decision to ease travel restrictions by opening check posts along the Line Of Control (LOC) in no way suggested converting the LOC into into International Border in J and K. This, was aimed at facilitating people to people movement.

Isn't there a lack of reciprocity on the part of Pakistan to India's unilateral announcement of confidence building measures?

The steps announced by the Prime Minister are well thought out covering various areas of trade, commerce and enhancing people to people ties to develop good neighbourliness.

People cannot be peripheral. It is India's firm view that people of the two neighbouring countries should be encouraged to travel to each other's country.

It is not a trilateral issue. It is a bilateral issue between India and Iran and it is not subject to Pakistan's veto or concurrence.

On Saturday at Agra, Vajpayee and Musharraf will have a one-to-one meeting before the start of the delegation-level talks. Then there is lunch. It is a working lunch. Then there would be delegation level discussions.Provision has been kept for Monday morning if the talks spill over