Kashmir Can’t Be Described As India-Occupied Or India-Administered: India at UN

In the same breath, the Indian delegation also defined terrorism as a violation of human rights and urged countries to acknowledge and condemn it as such. 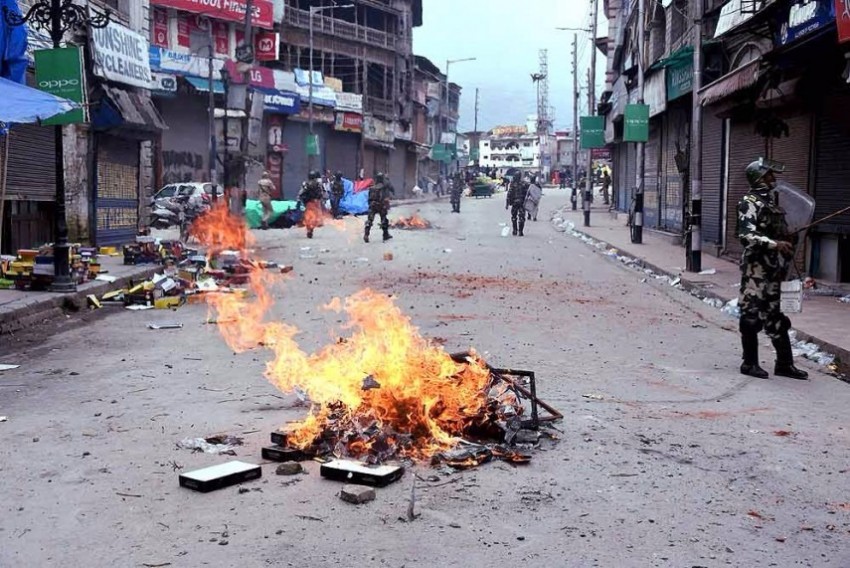 File-PTI Photo by S Irfan
Ushinor Majumdar May 05, 2017 00:00 IST Kashmir Can’t Be Described As India-Occupied Or India-Administered: India at UN 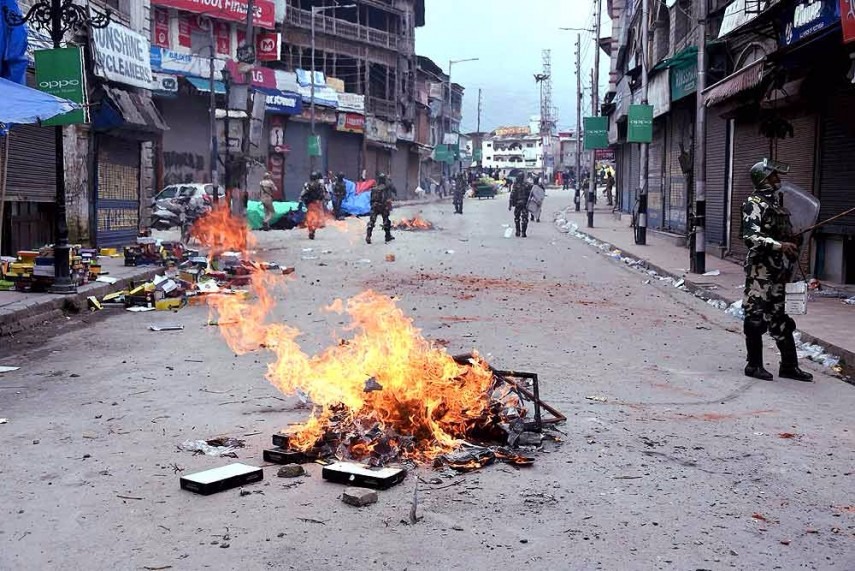 The Indian delegation to the United Nations Human Rights Council (UNHRC) stressed that Jammu and Kashmir was an integral part of the country’s territory. A member of the delegation addressing the UN human rights body said that “…describing any territory of India as India-occupied or India-administered…” was an aberration and not valid.

The comments on Kashmir came in response to a statement by the Pakistan mission which made recommendations to India on Kashmir. This included suggestions to hold a plebiscite for Kashmir’s self-determination; ending the Armed Forces Special Powers Act (AFSPA); banning pellet guns and allowing a free press to function in Kashmir.

In the same breath, the Indian delegation also defined terrorism as a violation of human rights and urged countries to acknowledge and condemn it as such.

While this novel view landed  predictable applause in certain social media circles, it did not encompass the origin and spirit of the phrase “human rights”. A more apt description of terrorism would perhaps be an obstruction of in the delivery of human rights by a government which is ultimately responsible for it.

This was the third time that India’s human rights record was under the UNHCR’s Universal Periodic Review. The first two were in 2008 and 2012 respectively. The delegation was led by attorney general of India, Mukul Rohatgi, assisted by additional solicitor general of India, PS Patwalia, and joint secretary-level officers of the union government ministries such as home affairs, external affairs, women and child development, rural development and also the NITI Ayog (the government’s think tank).

At first, Rohatgi read out India’s response to the review process by responding with the action it had taken. The report answered questions raised by other countries on several human rights issues as well as on previous recommendations made by countries. There were also reports by UN agencies and the Indian National Human Rights Commission (NHRC) that had raised issues.

The bulk of Team Rohatgi’s responses included extracts from the Constitution of India, specific Indian laws, description of the justice system and also a number of government schemes thrown in for good measure.

At least Singapore and Turkey seem to have come prepared with some Hindi. Their delegations to the United Nations Human Rights Council (UNHRC) lauded the country’s working attitude of Sabka Saath Sabka Vikaas — the slogan that elected Narendra Modi to power.

The two countries were also joined by Malaysia in applauding the StandUp India scheme of the Indian government. Also liberal in its praise was Mauritius. There was also praise for the Digital India campaign which could connect the large population.

While, Turkey has recently been developing diplomatic relations with India, Mauritius and Singapore see a lot of trade ad foreign currency flows with India.

Several countries were appreciative of India’s recently-enacted Rights of Persons with Disabilities Act 2016.

— ratifying the Convention Against Torture; bringing a law against torture

— impose a moratorium on the death penalty

— protect women from violence, including domestic violence and marital rape; prosecute those perpetrators of honour killings.

— actively prevent human trafficking and prosecute those involved in the crime

— protect for children; including suggestions to protect children from corporal punishment at home

There were also strong recommendations to end discrimination based on sexual orientation. Noting the Indian Supreme Court’s recent judgement recognising transgenders, several countries asked that more work be done in this regard. Several nations also asked that India decriminalise homosexuality (as under Section 377 of the Indian Penal Code).

Team Rohatgi defended many of the remarks and warded off the recommendations. However, in some situations, they appeared to be marketing schemes launched by the government schemes .

“India will leave no man behind,” said Rohatgi, using a phrase that is used in army missions.

The delegation said that the AFSPA itself had a lot of checks and balances and even threw in the comment that the security forces themselves monitored human rights in areas where AFSPA was enforced.

It said that the law was reviewed every six months and only enforced to aid civil authorities maintain peace in troubled areas.

The context seemed to be amiss here in the face of complaints of large-scale violations in the theatre of three of India’s biggest internal conflicts in — Jammu & Kashmir, the Northeast and left-wing extremism in Central India.

A recent example is the video of a Kashmiri youth who was strapped on to the front of jeep supposedly to ward off stone-pelters in Kashmir. Rohatgi had himself cheered the move, calling it an innovative method.

Regarding the Convention Against Torture, the Indian delegation said that it was committed to ratifying it, though it has not done so since signing the treaty back in 1997.

The delegation said that the country had asked the Law Commission of India to come up with a comprehensive law on torture.

However, earlier in the day, Outlook found that this position is not correct. The same statement had been made by the solicitor general of India before the Supreme Court while a PIL was being heard.

The Law Commission has said that it is making recommendations to amend the penal laws, there is no specific law on torture that it is coming up with.

In parliament, last year, the union home ministry had said that the union law ministry has prepared a draft anti-torture bill but has not committed a timely for delivery.

Some of the countries that recommended India ratify the convention against torture are Germany, Greece, Israel, Montenegro, Israel, Sierra Leone, Egypt, South Africa, Philippines,Turkey and Bolivia.

Following some incidents, including the recent one in Noida, countries also raised the issue of Africans (including students) being the target of race attacks.

A government representative said that the concept of racism “…is alien to our culture”. He said that India was a non-violent country, invoking Buddha and Gandhi into the mix and flatly denied that racism existed in the country.

India is one of the few rapidly-developing nations that is yet to abolish the death penalty. There have been situations where the Supreme Court commuted several death sentences and this was appreciated by some countries.

However, they pointed out that India needs to move to abolishing it altogether.

The Indian delegation responded with a detailed description of the Indian criminal justice system that allows several appeals.

Rohatgi himself gave the example of being pulled out of bed at 2 am in the morning to argue in a specially-convened hearing of the Supreme Court in the Yakub Memon death penalty case.

Memon was convicted and handed the death sentence last year as a co-accused in the 1993 Mumbai blasts case. His execution took place in the midst of divided opinion of whether he was fairly tried since his trial was carried out under a repealed law as well as other procedural issues including a delayed appellate process. Others voiced that he was a terrorist and called for a swift death sentence.

A few countries including the Holy See and Korea expressed anguish over the increased violence targeting specific communities in relation to religious conversions.

Several social commentators opined that the Indian delegation had failed to address this issue especially in a climate of religion-based persecution.

On remarks regarding minorities and oppressed sections such as Dalits, the Indian delegation said that the country did not discriminate on religious and other lines and cited laws for protection of minorities and Dalits.

The only country to mention tribal groups was the USA which said that the tribal and indigenous groups must be protected.

The Indian delegation seemed intent on discussing the laws and mechanism put in place.

A representative described the law to protect children from sexual abuse saying that it was a child-friendly law with in-camera trials and sensitivity towards children.

It also spoke of a nationwide helpline to assist children and the government was helping with lakhs of such cases each year.

They did not have any response to a demand to bring in a law to stop beating children at home — a law that is enforced in many countries across the world.

The Indian delegation retired that the work of human rights defenders must conform with the laws of the country.

Lithuania was the only country to mention that India needs to proactively stop the attacks on journalists.

This FBI Translator Traveled To Syria To Investigate ISIS Operative, Ends Up Marrying Him