The Indian's prospects of a better finish were affected when he came in contact with Albers on lap 34 and went off track due to a puncture in his left rear tyre and had to pit twice for car examination. 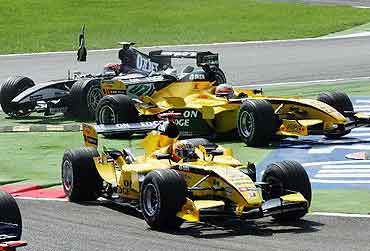 Narain Karthikeyan endured a tough race to finish 20th and last while Juan Pablo Montoya claimed his second win of the season on a day of mixed luck for McLaren-Mercedes at the Italian Grand Prix today.

Championship leader Fernando Alonso was second followed by local lad Giancarlo Fisichella for another satisfying day at office for the Renault team.

The success of McLaren and Renault was in contrast to the slide of Ferrari whose seven-time and defending world champion Michael Schumacher and Rubens Barrichello finished 10th and 12th outside the point position.

Alonso now has 103 points, a lead of 27 over Raikkonen with four races to go in the season.

Karthikeyan's Jordan teammate Tiago Monteiro of Portugal came 17th while the former saw the two Minardis finish ahead of him.

Raikkonen had the fastest time in the qualifying but was penalised 10 spots on the grid for engine change.

The Finn was stuck at the 11th place behind former world champion Jacques Villeneuve in Sauber until the first pit stop.

He then passed Alonso at the second chicane but his left-tyre was damaged at the same spot after the second pitstop.

Karthikeyan's prospects of a better finish were affected when he came in contact with Albers on lap 34 and went off track due to a puncture in his left rear tyre and had to pit twice for car examination.

"I made a good start but unfortunately Albers stupidly hit me in the rear at the first corner, which punctured my left rear tyre.

"It is really a pity as he has already done this to Tiago in the past. This is a long lap here so it took me a long time to come back to the pits to change tyre. Because I damaged my tyres in my accident yesterday, I had to use a very old set and therefore I knew this was the end of my race," the 28-year-old said.

The Indian said he was satisfied that he still managed to reached the chequered flag. "However, I am still happy that I managed to finish the race and I hope we will have a better result at Spa with the new car."

Monteiro, who started 17th on the grid, drove strongly in his new EJ15B finishing his 15th consecutive race, said the car was difficult to drive at the high speed circuit.

"We finished another race which is good for the reliability of the new car but I am really disappointed as this was a really tough race right from the start. I lost some part of my bodywork so the balance of the car was affected and then the tyres got worse and worse.

"This was a big surprise to us as we were quite happy with them at the test last week and at the beginning of this weekend. I do not understand how the tyres could act like this. I am not happy with this race at all as the car was very difficult to drive at such a high speed circuit."