Just What We Need: Another War

Why look back? No one wants to learn anything! Iraq 2 was a disaster. Can we expect Iraq 3 to be any better? Knock, knock: raise your hand if you think Syria will become our next miracle? 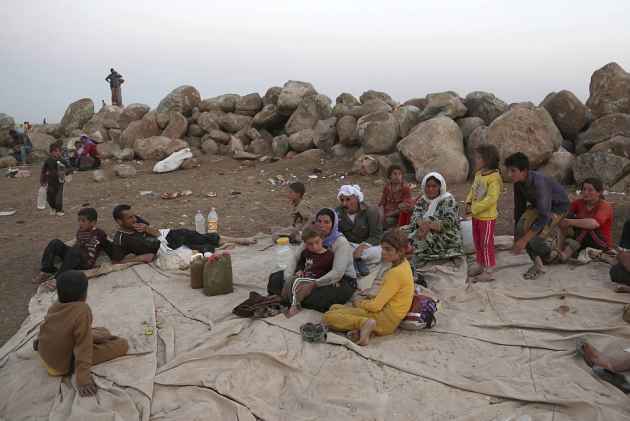 Sound the bugle! Get the press to march along; we are going to war.

Enemies ‘r’ us, and for a long time with the killing of bin Laden, a Jihadi fatigue had set in. With the apparent shrivelling up of the Al Qaeda menace, America’s threat-defining and refining machinery was somewhat adrift. What had been so simple, turned too complex to fuse into one soundbite.

Former Intelligence official Thomas Fingar, now of Stanford University, describes his own frustration in finding out what US policy priorities should be in national intelligence. He asked his colleagues to share the threats they worried about. He was soon inundated.

“When I was given responsibility for the process known as the National Intelligence Priorities Framework, almost 2300 issues had been assigned priorities higher than zero, “ he explained. “My first instruction was, “Reduce the number.”

He knew they needed only one bad-ass enemy to focus fears and attract appropriations to fight. He had too many threats to respond to. They had to go.

Now, he and the Administration have that new bad guy.

“The grotesque beheading of James Foley is stirring passions in Washington policy circles. From the highest levels of the Obama administration to the media pundits, emotions are flaring over what the United States should/could do. The act in itself has changed nothing insofar as IS’ threat to the United States and its significance for Middle East politics are concerned. It is the mood that has been transformed. Irresistible impulse is displacing cool deliberation. The flood of commentary, as usual, reveals little in the way of rigorous logic but much in the way of disjointed thinking and unchecked emotion.”

The response? Give us a war plan, and not just against ISIS, let’s throw in Syria too. Money is apparently no object.

“US operations against the Islamic State of Iraq and the Levant (or whatever we’re calling it these days) have probably cost the country about $100 million so far, according to one of the top defense budget experts. It’s difficult to come up with a precise estimate for what current operations in Iraq are costing…”

Don’t forget, as Glenn Greenwald didn’t, before the current focus on ISIS, the US was bombarding Syria’s Assad with calls that he step down amidst threats of overthrowing him.

“It was not even a year ago,” he writes, “when we were bombarded with messaging that Syrian President Bashar al-Assad is a Supreme Evil and Grave Threat, and that military action against his regime was both a moral and strategic imperative. Now the Obama administration and American political class is celebrating the one-year anniversary of the failed “Bomb Assad!” campaign by starting a new campaign to bomb those fighting against Assad—the very same side the U.S. has been arming over the last two years.”

Recall: that campaign was undercut when public opinion in the US turned against it. We negotiated instead, and accomplished something, eventually destroying Syria’s stash of chemical weapons. Why emulate a success when you can make more mistakes?

That was then, and this is now. ISIS is the new boogieman. The next stage of our assault is underway as we can deduce from a build up of recent press reports:

Alawites prepare as IS, Jabhat al-Nusra close in on regime areas

Drones a Step Toward Expanding War Into Syria

President Obama wants to make a decision by the end of this week whether or not to expand his war against ISIS into Syria, report Josh Rogin and Eli Lake. However, nobody knows yet how we can do it, or what will happen next.

“Members of the Islamic State of Iraq and the Levant, or ISIS, were trained in 2012 by U.S. instructors working at a secret base in Jordan, according to informed Jordanian officials. The officials said dozens of ISIS members were trained at the time as part of covert aid to the insurgents targeting the regime of Syrian President Bashar al-Assad in Syria. The officials said the training was not meant to be used for any future campaign in Iraq

The Jordanian officials said all ISIS members who received U.S. training to fight in Syria were first vetted for any links to extremist groups like al-Qaida.”

Now, there are reports that the CIA is forming new hit squads to use ISIS tactics against ISIS with an ISIS-like assassination offensive, to “cut off the head of the snake.” (Sounds like beheading doesn’t it?) Shh!

Sounds like we are headed back to the dark side with killings, torture, renditions, secret sites etc. Will that long awaited CIA report now be seen as a manual for more of the same?

The last time the US organized assassination teams in Iraq, it didn’t work out that well. And guess who else was involved? (Israel trains US assassination squads in Iraq):

“Israel helping train US special forces in aggressive counter-insurgency (CI) operations in Iraq, including the use of assassination squads against guerrilla leaders, US intelligence and military sources said yesterday…The new CI unit made up of elite troops being put together in the Pentagon is called Task Force 121, New Yorker magazine reported… One of the planners, highly controversial. Lt. Ge. William “Jerry” Boykin…with calls for his resignation after he told an Oregon congregation the US was at war with Satan who “wants to destroy us as a Christian army.”

And so it goes, as once again, around and around, we become more and more like the enemy we warn against.

Back to Michael Brenner’s take on how our media hysteria is not helping,

“There is a more general lesson to be learned from this latest exercise in ad hoc policy-making by press conference. The insistence of senior officials to speak at length in public on these complex, sensitive matters when there is no set policy is inimical to serious planning and diplomacy. If they feel compelled to react to events to satisfy the media and an agitated populace, they should just say a few well-chosen words and then declare themselves on the way to an important meeting – preferably not in Martha’s Vineyard.

“Silence, though, is taken to be tantamount to death in the egocentric media age where image is all – confusing random motion with focused action.”

Why look back? No one wants to learn anything! Iraq 2 was a disaster. Can we expect Iraq 3 to be any better? Afghanistan is a disaster. Israel failed in its aims in Gaza, whatever bloody “urban renewal” was imposed at a high human toll. Libya is a mess.

Knock, knock: raise your hand if you think Syria will become our next miracle?