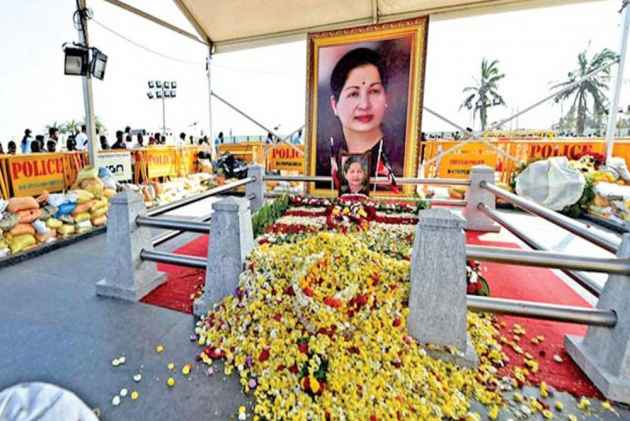 Former AIADMK supremo J Jayalalithaa was on Tuesday remembered on her first death anniversary with party veterans K Palaniswami and O Panneerselvam leading workers in paying tributes to 'Amma' at her mausoleum in Chennai.

The two senior leaders stood with folded hands for sometime and then bowed down to pay their respects.

Chants by supporters hailing Jayalalithaa filled the air even as some functionaries were seen getting emotional.

Later, the party workers led by Panneerselvam took an oath to mark the day.

In the oath read out by Panneerselvam and repeated by others, including Palaniswami, the AIADMK workers vowed to ensure that the 'golden rule' of 'Amma' continued by their hardwork.

Jayalalithaa is fondly addressed by her supporters as Amma, meaning mother in Tamil.

They recalled the "relentless hardwork of Amma" in making AIADMK a successful people's movement and each one of them vowed to be a true party worker walking in the footsteps of the late leader to ensure the party's growth.

They also recollected Jayalalithaa's popular statement of "makkalukkaga naan, makkalukkagave naan" (I am for the people, I am because of people), and vowed to continue working in that direction.

Panneerselvam started reading the oath by describing Jayalalithaa as AIADMK's "permanent General Secretary," a refrain often used by the party leaders when she was in charge of its affairs.

The unified AIADMK, formed following the merger of then factions led by Palaniswami and Panneerselvam in August this year, has since done away with the powerful General Secretary post, making Panneerselvam the coordinator and Palaniswami co-coordinator.

The partymen today also vowed to "protect" AIADMK and strive to work towards its future successes.

Later, they observed a two-minute silence in respect of the late leader.

Jayalalithaa's mausoleum saw a steady stream of visitors today, with scores of public paying tearful tributes to the late Chief Minister on her first death anniversary.

Jaya Plus, a news channel part of the Jaya TV network managed by the family of deposed and jailed AIADMK leader VK Sasikala, ran shows on Jayalalithaa's various pro-people initiatives as chief minister of the state.

A popular leader, Jayalalithaa breathed her last on December 5, 2016.

She was admitted to a corporate hospital here on September 22 with complaints of fever and dehydration and underwent medical treatment for about 75 days before her demise.

Her death later triggered a split in the party in February this year when Panneerselvam, then Chief Minister, revolted against Sasikala, now serving a jail term in connection with an assets case in Bengaluru, alleging he was forced to make way for her to the state's top post.

Palaniswami was subsequently made chief minister but he later revolted against then deputy chief of the party, TTV Dhinakaran, with a section of ministers led by the former sidelining him.

The factions led by Palaniswami and Panneerselvam later merged on August 22.

A party general council in September sacked Sasikala as its chief.

In Puducherry, AIADMK workers, including a good chunk of women took out a procession from near the statue of Annadurai to the beach road there to pay homage at the portrait of Jayalalithaa on the occasion.