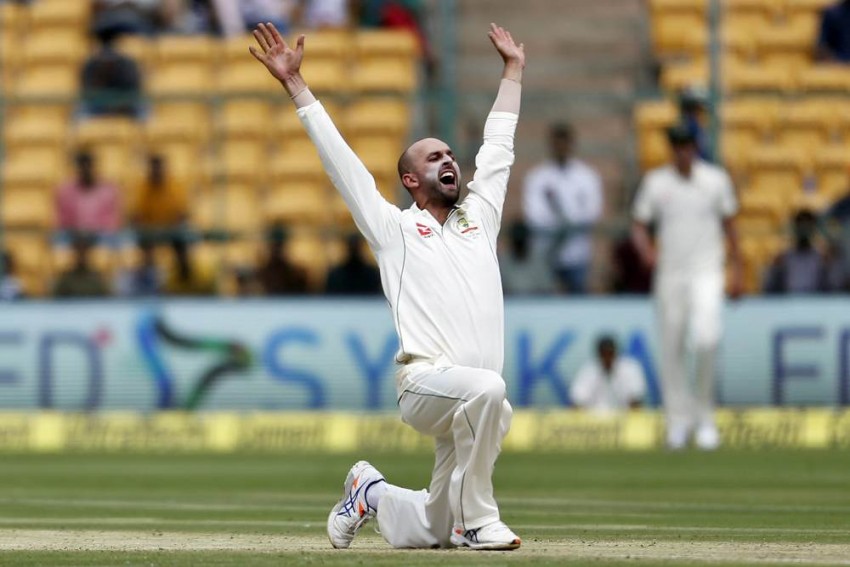 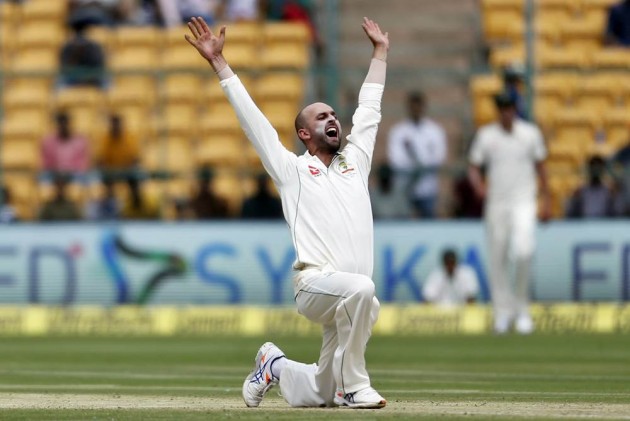 outlookindia.com
2017-03-04T19:36:09+05:30
Australian off-spinner was the star of the opening day of the second India-Australia Test at the M. Chinnaswamy Stadium here in Bangalore on Saturday. He captured eight wickets for 50 runs as he virtually single-handedly spun India out for a mere 189 in the first innings.
Lyon, 29, playing his 65th Test, has now taken his career Test wickets tally to 241. He spoke to reporters at the end of play.
Excerpts from his press conference:
On how much work he has put in to produce a performance like that.
A fair bit, if I have to be brutally honest. After the tour of Sri Lanka I went home and reflected on my performance there. I worked very, very hard in the lead up to the BBL games. I was going down to the matches two hours before and bowling in the nets. John Davison and Darren Berry worked on my strength and, obviously, I studied what R. Ashwin does. He is one of the best spinners in the world. Credit has to go to Davison and Berry for putting in the hard work and it is very satisfying to perform like this.
On the manner in which he got Kohli out.
As I said before, you want to compete against the best and he is one of the best players of the world. To take his wicket today was exceptional but we know this series is massive series and it’s a long series. We expect him to bounce back. But he obviously is the head of the snake if you want to put it in Dale Steyn’s terms. So it’s quite pleasing to take Kohli’s wicket.
On India’s last three innings of 600-plus, before this series started, and now Australia getting India out cheaply.
We sat down as a team and we know how good India are. We wanted to come out and compete hard against India and I think we are doing that at the moment. Cricket is a funny game and they are a talented squad with full of superstars so we need to keep working on our plans and do our basics well. We have got that belief in ourselves and the atmosphere in the change room is unbelievable at the moment. If we can keep doing that then there will be some good days for Australia.
On whether he changed anything in his bowling after bowling well in the first Test in Pune.
Absolutely nothing; I was pretty happy the way I bowled in Pune and it was a privilege to work with Steve O’Keefe. We are different bowlers and we are good mates. We want to see each other doing well. I am pretty lucky to be part of a strong bowling attack which includes Mitch Starc and Mitch Marsh.
On whether the pitch is deteriorating.
I'd say the wicket deteriorates if there's cricket being played on it, I guess -- interesting wicket. It's what we expected over here. We knew we weren't going to have much grass on the wicket. I didn't expect so many cracks on Day One but they're there. I'll reassess the wicket after both teams bat on it. It's hard to criticise one team when only one team's batted on it. The wicket's going to deteriorate and, hopefully, we can bat well tomorrow and get to wherever we get to and come out and do the same thing we did today: bowl in partnerships, be patient and do the basics really well.
Qaiser Mohammad Ali in Bangaluru
For in-depth, objective and more importantly balanced journalism, Click here to subscribe to Outlook Magazine