'It is Good For The Game If India Stay At Top' 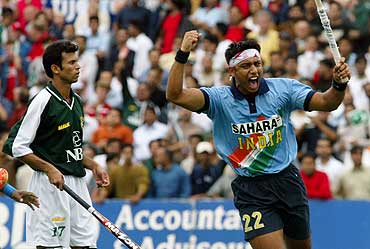 Australian hockey legend Richard Charlesworth today expressed his willingness to coach the Indian team after an Indian hockey official hinted at appointment of a foreign coach in the backdrop of the side's below-par performance in the Champions Trophy at Amstelveen.

Charlesworth, who led the Australian side to glory in the 1986 World Cup, said he was ready to accept the job if any such offer comes his way.

"Coaching the Indian team would be a challenge. I am not chasing the job, but am willing to consider any offer made in this regard," the 51-year old Charlesworth said.

A high performance consultant and a man of varied interests and deeds, Charlesworth said a lot could be done to lift Indian hockey to the highs of yesteryears.

"However, any assignment should be long term of say five years, during which I can also groom Indian coaches who can then take over. Basically, you need to put a structure in place that can sustain itself," said the former captain, who also coached the Australian women's team which won just about every major tournament, including the World Cup, Olympics and the Champions Trophy. The lacklustre performance of the Indian team in the ongoing Champions Trophy, in which they lost three of their first four matches before beating Pakistan yesterday, had prompted the Indian Hockey Federation secretary-general K Jothikumaran to indicate that a foreign coach could be appointed for the team.

As a player, Charlesworth was acknowledged as one of the all-time greats, having participated in four Olympics. His biggest regret todate has been the failure to win a gold medal at the Olympics.

"I have been to India a few times, and am aware of the conditions there. I feel that it is good for hockey if India consistently remains in the top bracket.

"As you saw last night against Pakistan, the Indians enjoyed a lot of support, even from the Dutch.

"There is a lot of talent in your country, but you also need to have a structured long term programme to maintain consistency of performance," he said.

The concept of a foreign coach is being mooted in some quarters as it is thought that an "outsider" would be free of pulls and pressures that an Indian coach is subjected to.

In fact, back in the 1970s, the IHF under Ashwini Kumar was in contact with Horst Wein of Germany, a noted theoretician, but the talks never fructified.

From time to time since then, there have been suggestions to hire a foreigner to train the players in specifics like penalty corner conversions.

In the 1990s, the IHF did contact Floris Bovelander, the Dutch penalty corner ace, to coach Indians in this department, but yet again, the move fell through.

Charlesworth said there has been no approach whatsoever from India.

"But I am certainly open to any offer provided I am suitably compensated financially as coaching the Indian team would mean separation from my family in Australia.

"Also I should have a support team which could communicate my thoughts to the players in their own language," he said.

"Let me reiterate that I am not exactly looking for a job. I am enjoying a stress-free life right now, but I feel that I have plenty of coaching still left in me," he added.

Besides hockey, Charlesworth was a practicing physician in Perth from where he was elected to the House of Representatives for four consecutive terms.

He also authored a book on coaching that has been acclaimed as one of the best of its kind.

"Right now, I am working on another book and will be staying in Italy for about a year to complete it," he said.