Home  »  Website  »  International  » Opinion  »  Is Musharraf Walking Into A US Trap?
Opinion

Is Musharraf Walking Into A US Trap?

Or so the optimists among the Indian policy makers would like to hope, for Pakistan has over a dozen of the most dangerous terrorist groups in the world, and nuclear weapons to back them up.
Joi 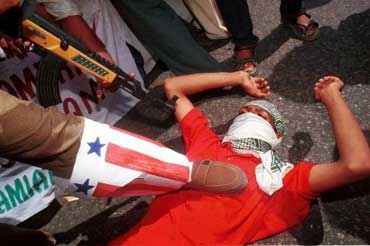 Grim as the situation might seem today for the Taliban, Pakistani dictator Musharraf and the Pakistani nation have much more to lose in the coming conflict. Pakistan had little choice but to cooperate when Uncle Sam came knocking a couple of days after the WTC and Pentagon attacks. The decision Musharraf had to make must have torn at his and his nation’s heart. For separating the Taliban and the Bin Laden-led terrorist network from Pakistan is akin to separating a child from its mother.

Pakistan had given birth to the Taliban and carefully nurtured it with military and logistical support for the last several years. Pakistani military and its intelligence agencies were heavily involved in Bin Laden’s network of big and small terror groups that are active in Jammu and Kashmir state of India, Chechnya, Bosnia, Philippines, and numerous other terrorist hotspots.

With tens of thousands of Pakistanis graduating from the nation’s madrassas every year, and fanning out to spread Bin Laden’s message through words or bombs, Pakistan has a massive human investment in the jehad enterprise. The ISI manages Pakistan’s jehadi groups that collaborate with Al Qaida. In fact one of the main reasons that the US deemed Pakistani help necessary was this very proximity of ISI to Al Qaida. ISI is the only agency that can possibly know with some degree of certainty the whereabouts of Bin Laden and other Al Qaida leaders.

It was thus of very little surprise that Pakistan’s streets exploded this week with fury against the US and Musharraf’s offer of cooperation. While Musharraf claimed only 15% of Pakistanis sided with the Taliban in the current standoff, a Gallup poll conducted the same day pegged that number at 67%. Such a number is not unexpected, given that Pakistani authorities have spent the last two decades propagating Islamic fundamentalism and nurturing the forces of jehad around the world.

Once the attacks against the Taliban start, the situation in Pakistan is likely to take a turn for the worse. Pakistani generals and intelligence officials, who owe allegiance to the ‘Islamic jehad’ movement, are unlikely to sit idly through those attacks. As protests mount, the jehadis battle security forces in the streets and attack bases being used by the US, the temptation will be great for one of several generals to overthrow Musharraf.

The US is making clear that strikes on Bin Laden and the Taliban will only be the beginning of a long campaign. That may mean subsequent attacks on terrorist centers in other countries, including Pakistan. This fact is not lost on Pakistan’s jehad leaders, or the military authorities that collaborate with them. In such an eventuality, continuance of the violence in Kashmir will become ever more difficult once Pakistan’s terrorist groups are neutralized.

It is this violence that has kept tempers from subsiding in Jammu and Kashmir state of India, and has prevented the Indian government from taking measures to bring normalcy to that state. A peaceful and prosperous Jammu and Kashmir will be easier to wean away from the jehadi stranglehold that it is trapped inside. Kashmir is by far the main national obsession of Pakistan, and giving it up will be too steep a price for prostituting itself to the US.

There is no doubt that the US administration is aware of the dangers of its "you are either a friend or a foe" policy. There are dangers in the Mid-East, and of friendly nations such as Saudi Arabia and Egypt turning against the US during this "infinite" campaign. However, the immediate danger is of Pakistan exploding in civil war. Jane’s Defense publication details this threat and calls the potential consequences "catastrophic". The question is why then has the US not been subtle in its pressure on Pakistan. Could it be that the US is leading Musharraf on a path to his own destruction?

There are prior examples of the US utilizing an unsavory dictatorship for its own short-term interests, and having to clean up the mess later. Saddam Hussein was supported by the US administration as a counter to Iran up to 1990, and a blind eye was turned to his misadventures, including the depredations he wreaked on his own people. Noriega of Panama was similarly enlisted in the US war against communism, until he became an embarrassment with his close links to drugs. In both cases, the US had to use force to neutralize its own creations.

In the case of Pakistan, the US has created a problem of a larger magnitude. Pakistan has over a dozen of the most dangerous terrorist groups in the world, and has nuclear weapons to back them up. As long as citizens inside US borders were unaffected, the US looked the other way while these groups killed and maimed in Jammu and Kashmir for over 12 years.

But September 11 changed the US outlook. It is impossible to believe that the US does not realize the severity of the threat from within Pakistan. It is very likely that US defense officials are working on plans to neutralize both the terrorist centers in Pakistan and its nuclear arsenal. CNN reports that India has provided the US with information on Pakistani terrorist camps. Indeed the buildup of hundreds of attack planes and several carrier groups appears to be an overkill against Afghanistan, which is described as being devoid of targets, and with its terrorist camps already emptied out.

An open attack on Pakistan by the US, however, will be looked upon as a "betrayal", especially by other Islamic states that have been wooed by the US. Then how could the US justify action to remove the long-term Pakistani threat? A civil war, which Pakistan is being pushed towards by US pressure, would provide just such an opportunity. Once a coup happens, the US could cite an imminent threat of Indo-Pakistan nuclear war, and use a combination of air strikes and commando operations against extreme Islamic elements in the Pakistani military. Such operations would include securing and removal of the 25+ Pakistani nuclear-capable missiles. These missiles are crucial for any Pakistani first strike threat, given that they would arrive at targets in Indian cities in minutes. The only other Pakistani means of nuclear delivery are F-16s. These could be destroyed in a sudden and massive strike at their air bases, and those that manage to take off towards India intercepted by a combination of US and Indian fighters.

Such a course of events does not preclude the possibility that some of the missiles will evade US action. The London Times reports recently that these missiles are normally kept unassembled, with the nuclear tip kept in a separate location, and suggests that Islamic extremists who take over in a potential coup would not have the technical capability of assembling and using them. This report neglects the fact that these same Islamic extremists have close contacts with the Pakistani military. If these elements can convince the military to carry out a coup, they can surely convince them to arm the missiles.

Thus despite the immediate dangers, the long-term prospects of such a scenario are more positive. A Pakistan devoid of its nuclear weapons will no longer threaten its neighbors with export of jehad. If a significant portion of the extremist elements in Pakistan’s military is neutralized, deprogramming the jehad mentality of Pakistani institutions could be facilitated. As a new political order is established in Pakistan more in tune with improving the lot of its people rather than spreading jehad around the world, the global terrorist threat will subside and contribute greatly towards the new US war on terrorists.