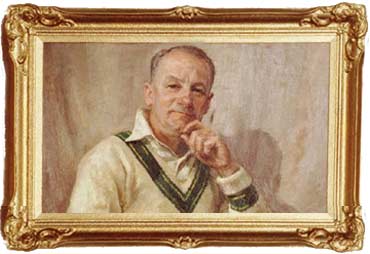 That was Nelson Mandela's first question to an international delegation that came to visit him in 1986 during his long incarceration.

Cut to circa 1998. A group of Sydney University academics write to Mandela to invite him to attend a seminar called, "What Makes a Champion?" Since these are pre-internet days, it takes six months before a letter of acceptance arrives.

The academics are delighted. Now tell us, they write back, who do you regard as an Australian champion? Professor Peter Doherty (who also has a Nobel)? Or Richard Butler (of UNO; helped disarm Iraq)? Or Herb Elliott (1500 metres runner)? Who would you most like to meet when you get here?

As Caroline Overington of The Age reported last year, another letter was sent. This time to the Don himself:

"Dear Sir Donald, the most significant person of the century, Mr. Nelson Mandela, has admired you all his life. He would really like to meet you. What do you say?"

It was nothing personal. Sir Don was getting on, having just turned 92. He did however agree to let Mandela have a picture.

More stories. (Legends? Cricket lore?) Circa 1971. Australia versus Rest of the World:

Don Bradman. The most famous Australian name of them all. As Thomas Keneally famously wrote, "The only history we were taught was European. Poetry cut out after Tennyson. If we spoke of literary figures, we spoke of Englishmen. Cricket was the great way out of Australian cultural ignominy for, while no Australian had written Paradise Lost, we knew Don Bradman had made 100 before lunch at Lords."

Way back in 1934, The Herald had sympathised, "Bradman has to carry on at the high pitch demanded by the idolising populace -- so tyrannical a thing is pre-eminence in the sporting field."

The younger Bradman, his only son John, clearly found it tyrannical too. "Whether I go shopping, go to parties, play sport, play at Jazz shows or go for holidays etc., I am accompanied by constant overt curiosity and comments ... which are related solely to the name with which I was born."

A name - with mass appeal which transcended international, cultural or generational divides - he changed to Bradenham to Bradsen in the early 70's. And then changed back to Bradman. (As it happens the name may already have been changed. Headstones in the village churchyard at Withersfield in Suffolk, where Sir Donald's ancestors come from, suggest that it was originally Bradnam.)

Cut to circa mid nineties. An English team is touring Australia. What average might he achieve against them? Bradman ponders for a while, then settles for 67. Surprised gasps. Are their bowlers so much better than in his day, when his average was nearly 100? "Hang on," he replies, "I am 86".

Apocryphal? Maybe. But something we all thought he was capable of.

And then the news today. It was always going to be a shock. It was. For the Don was someone you expected to go on and on. Invincible. Forever not out. A man not known to get out in the 90's. He "had been suffering from pneumonia before christmas and was hospitalised for a short period, went home before christmas and was really trying to recover," as the agencies quoted Richard Mulvaney of the Bradman museum today. "I believe he died peacefully in his sleep."

Bradman (Sonehow the cryptic "Brilliant Ruler Always Delighted Many A Newcomer" or "Bragging Rights Always Demand Magnificently Astronomic Numbers" that turned up on a crossword page didn't seem to do him justice) was born on 27th August 1908 at Cootamundra, a township in southern New South Wales, but he was raised further east in Bowral, a small highlands town which lies close to 100 kilometres to the south west of Sydney.

As a boy he spent hours single-mindedly hitting a golf ball against a brick wall with a single stump for a bat. The practice paid off as Wally Hammond, who captained England in the 1938 series recalled "On one or two occasions, when [Bradman] was well set, and when he saw me move a fieldsman, he would raise his gloved hand to me in mock salute, and then hit the next ball exactly over the place from which the man had just been moved."

On his retirement, Bradman became the first Australian player to be knighted. As John Arlott said "No more were bowlers faced with an apparently insoluble problem". Status as a Commander of the Order of Australia was also conferred upon him in 1979, and last year he was named (along with Jack Hobbs, Gary Sobers, Shane Warne and Vivian Richards) as one of Wisden's Five Cricketers of the Twentieth Century. Of the 100 voters consulted, every one gave Bradman their vote. You don't get any more unanimous than that.

John Le Carreonce wrote:'The friendship struck up between Bradman and Gordon Richards in my father's house was wonderful to observe. They both carried their hands in the way pugilists do almost, very forward of the body. You suddenly realised that whatever they had done in life they would have been marvellous at it. Both were completely in control. Never drank or ate anything they didn't want. Never wasted a word. Really great men, I thought.'

We could go on. Quoting R. C. Robertson-Glasgow ("Poetry and murder lived in him together/He would slice the bowling to ribbons/then dance without pity on the corpse."), Les Carlyon ("The difference is that Bradman pulsated and Boycott merely had a pulse") and Sir Neville Cardus, who wrote of an innings that was "cruel in its excessive mastery". But then there were many such innings. And we'd be wasting many words.

Modest to a fault, Bradman was once asked to comment on his cricketing career. "I suppose I have done a couple of respectable things in my life," he said

Asked during a rare television interview in 1996 to explain why his records remained unchallenged, The Don struggled for an answer saying: "I saw much better batsmen than I was. Lots of them...they just kept getting out".

What would he like best to be remembered for? "Integrity", said Bradman.

His wife Jessie Menzies, whom he married in 1932, died in 1997. The couple had two children, John and Shirle; and three grandchildren - Greta, Tom and Nicholas.

Sportswriter Jack Ingham once wrote: "It is strange, but I think true, that all the time, day and night, somewhere in the world somebody is talking about Bradman.".

We suspect that the number of such people must have suddenly gone up exponentially.

Is Sir Don Bradman Still Alive?Yes, he was then, way back in 1986, is now, and shall always be.

The Don had apparently asked that instead of sending flowers, mourners should send donations to the Bradman Foundation in Bowral for a special Bradman Memorial Fund.

'A Veritable Giant On And Off The Field'