The dreadful shadow of Iraq appears to have clouded the rational faculties of many Indian critics of the vote in Vienna. I do not include in this category the ideologues of the left, who appear to have subordinated rationality, if not facts, to polit 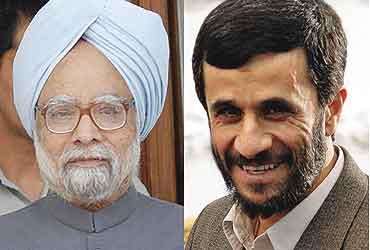 Regardless of how individual US Congressmen may view India's vote last month at the IAEA on Iran, the vote was cast, as our Ambassador to the US stated, despite US pressures, and not because of them. Only some Americans seem to appreciate India's fierce defence of her right to take independent decisions on her foreign policy; surprisingly, many Indians, including the Left parties appear to be doubtful on this score.

It is a fact that the dreadful shadow of Iraq appears to have clouded the rational faculties of many Indian critics of the vote in Vienna. I do not include in this category the ideologues of the left, who appear to have subordinated rationality, if not facts, to political expedience. Clearly, they are trying to take advantage of the current window of opportunity to establish themselves as players on the national stage, rather than mere regional exceptions.

Others, more serious critics have drawn parallels with the experiences in Iraq, particularly the initiation of Gulf War II and its terrible consequences. Is the comparison valid?

While superficially it may seem so, due no doubt to the unremitting and vicious rhetoric between Iran and the US, the situation is in fact qualitatively different. Iran is a theocracy; it has had close links with the A.Q. Khan proliferation network; India's economic investment in Iran is still in the domain of the potential. Iraq, pre-invasion, was a secular, Arab State; no links with A.Q.Khan; cleared, after Gulf War I, by the IAEA of nuclear weapons; with large economic investments from India, including Indian nationals working in that country. These are only a few differences. Iran, of course claims it has no intention of building nuclear weapons. How does one judge intentions except by behaviour? On Iran's side this leaves much to be desired, according to the IAEA, not the US.

To return to the vote: the most common misperception is that the vote was cast under US pressure. What did the US want, in fact? To quote the US Under Secretary of State, during US Congressional hearings on 8th September : "We are specifically asking India to join us and the other countries of the IAEA to agree on September 19 to refer Iran to the UN Security Council." India's objective on the other hand, was to de-escalate the situation, rather than risk the dangers inherent in a nasty confrontation, which is what I believe she did.

India has significant relations with all the major countries involved- with the US, UK, Germany and France on the one side and Iran on the other. Friends do disagree, not on ideological grounds, but on the basis of national interest, including, one might add, India's interest in stability in the region, not only for oil but in the interest of the millions of Indians in the Arab countries, countries that are suspicious of Iran's rise especially after the chaos in Iraq. Is it in India's interest to have, under these circumstances a nuclear-armed Iran? Clearly not. In any case it is not Iran's case that she wants nuclear weapons- as mentioned above, it is her continued sparring with the IAEA that has led to the current crisis of confidence as reported by the Director General.

If India had not intervened and the EU had not amended their original resolution, even a negative vote from India could not have prevented Iran's case being referred to the Security Council. Time has been gained, and there is now a possibility that dialogue can resume, both between Iran and the IAEA and the EU-3.If Iran had been referred to the Security Council, what would have been achieved? Iranian co-operation? Unlikely. Sanctions? Neither the Europeans nor India would be in favour of such a step Russia and China's abstention vote is educative. To abstain when the majority is in favour of a resolution (there was a majority even without India's vote), is to implicitly accept the resolution, with some reservations. This is well known to anyone who has dealt with voting patterns in multilateral forums. In any case, the resolution does not specify a time frame for sending the case, if at all, to the Security Council. The Governing Board has the mandate to make such a reference, but on this occasion, has kept the exact timing under review.

This period needs to be used by all countries concerned with stability in the Gulf region, to seek viable solutions, without, on the one hand trying to humiliate Iran, and on the other by meeting the "confidence deficit" that has arisen because of Iran's ambiguous behaviour. So far, its past actions have not been very reassuring. It cannot be beyond international ingenuity to find such a solution. On the other hand, belligerent rhetoric from the US or Iran does not help; nor do ideological and uninformed pronouncements by so-called responsible political figures, whether in the US, Iran - or India.

Our Man In Rome