Here’s what happened at this years Intermot 2018 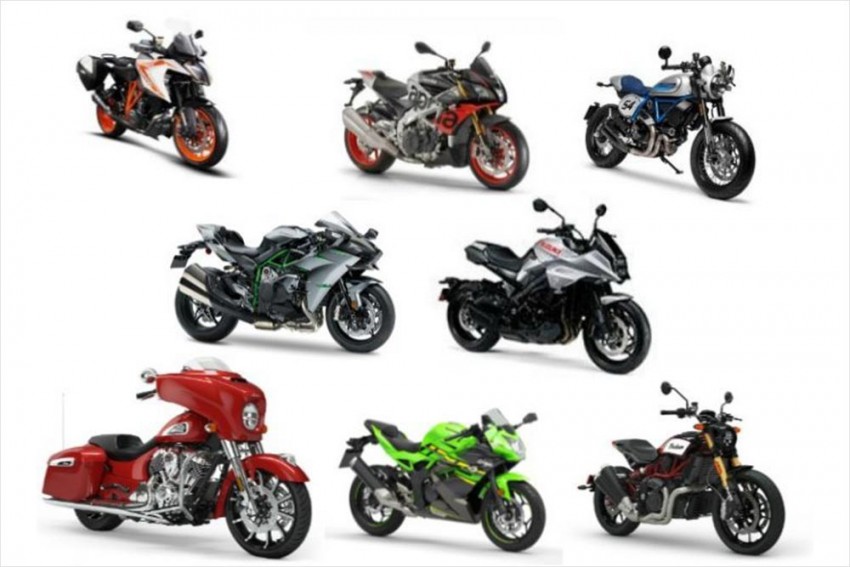 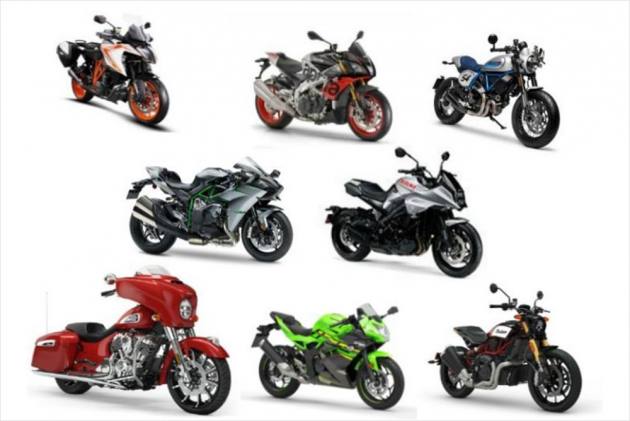 Intermot is an international trade fair that happens once every two years and attracts big names from the two wheeler world. It is the place to witness some big reveals and updates before EICMA comes knocking next month. This year the show stopper was the Suzuki Katana. Accompanying that reveal was quite a few bikes that got interesting updates for the coming year. Here is the list manufacturer wise: 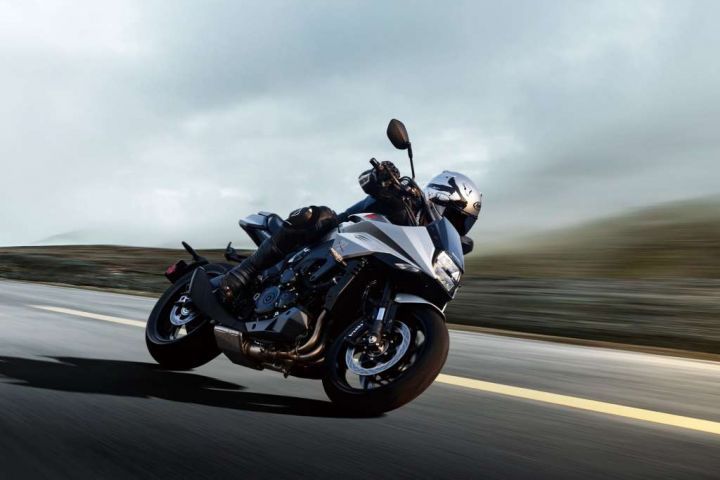 Undoubtedly, the jewel of the Suzuki pavilion was the Katana. The 80’s iconic motorcycle has been resurrected in the form of a neo-retro sportbike. We loved the square headlamp on the concept, a hark back to the original. 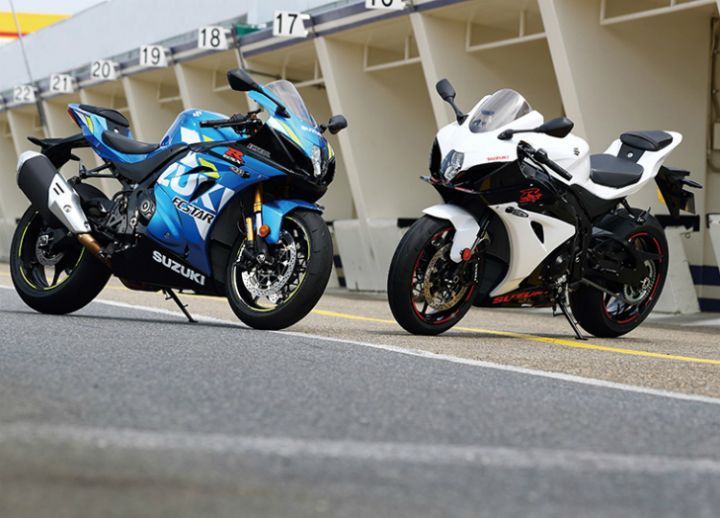 For 2019, it is the base Suzuki GSX-R1000 that receives the most updates. By updates, we mean the premium bits like the quickshifter and autoblipper from the GSX-R1000R, that come as standard on the GSX-R1000 now. The GSX-R1000R gets track focussed updates, while both bikes now come with steel braided brake lines. More details about the updates here. 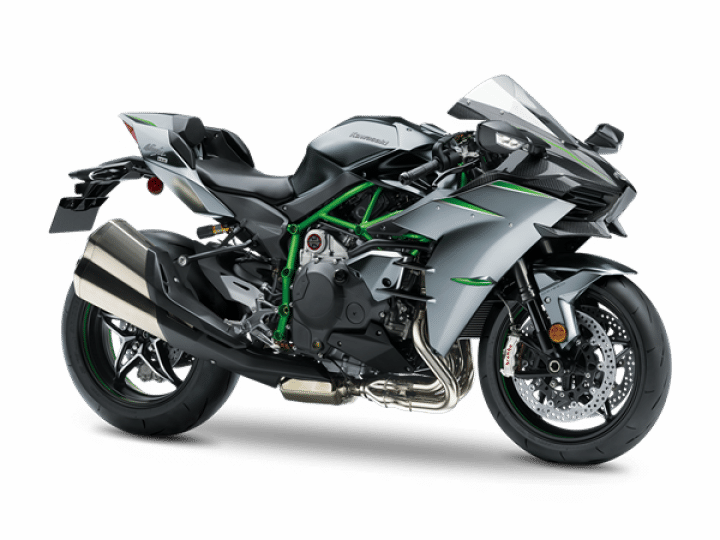 The ridiculously powerful Ninja H2 just got more powerful! Kawasaki engineers have managed to pull the rabbit out of the hat and extract a staggering 231PS (243 with ram air) and 141.7Nm of torque from the 998cc supercharged inline-four motor. Among other updates, it gets the TFT screen from the H2 SX and a new self healing paint! 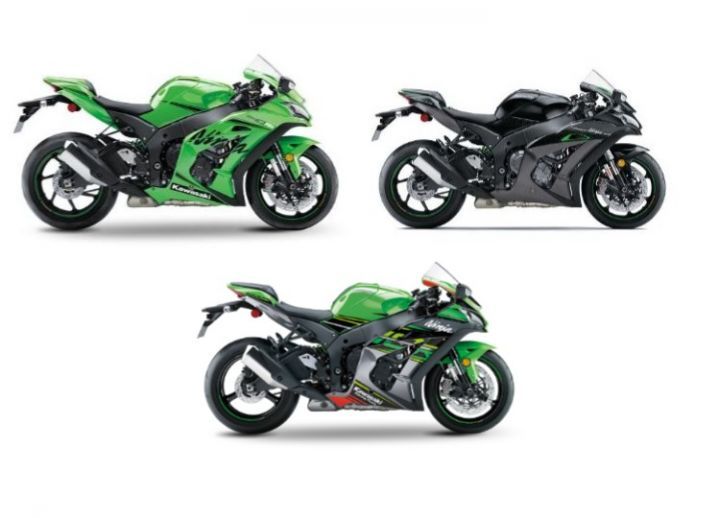 The 2019 Ninja ZX-10R range also gets new features and mechanical updates. The range-topping ZX-10R SE now comes with fully-adjustable, electronically-actuated Showa Balance Free Front (BFF) forks, lightweight forged Marchesini wheels and self-healing paint from the 2019 H2 range. The most major updates for the ZX10-R, ZX-10RR and ZX-10R SE are inside the 998 inline-four motor which now produce more power and torque. 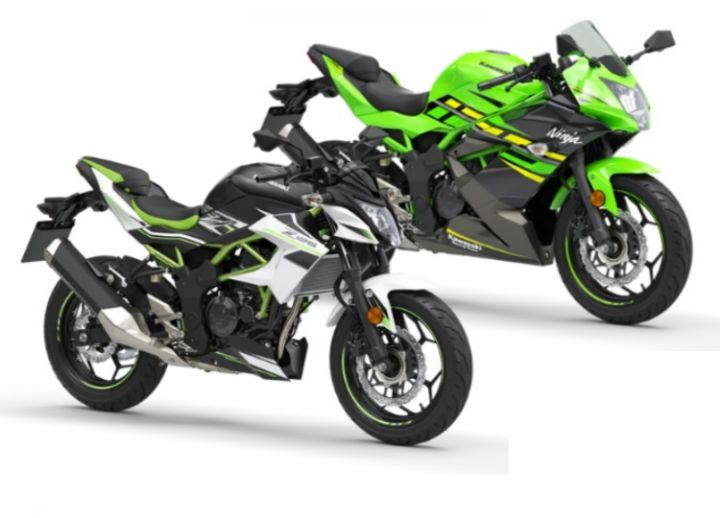 The 2019 Ninja 125 and Z125 sport similar design languages as their 250cc counterparts. Both bikes get a steel trellis frame with 37mm front telescopic forks and a preload-adjustable linked rear monoshock. Braking is via a 290mm front disc and 220mm rear disc, with switchable ABS as standard. We suspect the bikes may come to India as Kawasaki has been aggressive about localising most of its products and has been keen on getting low capacity bikes here. However, if launched here, we expect the bikes to have a 150cc motor. 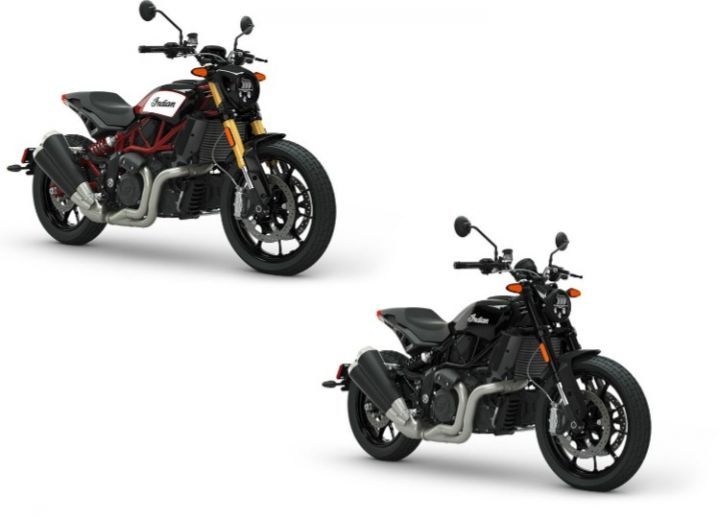 We were floored the first time we saw the Indian FTR flat tracker concept and prayed it would make it to production. Our prayers have been answered as two production versions were showcased at Intermot. The FTR1200S is the more exclusive version and gets a 4.3-inch touchscreen TFT instrument console, gold-finished forks and black/grey, grey/red and 'race replica' colours. Both bikes get three riding modes, wheelie control and lean-sensitive stability control. 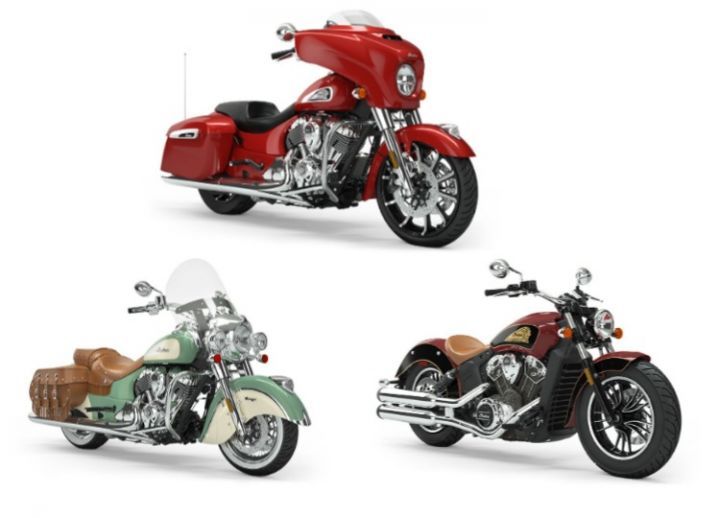 The rest of the Indian lineup has also been updated for 2019 with features like riding modes and a new rear cylinder deactivation system to reduce heat produced by the engine in stop-and-go conditions. 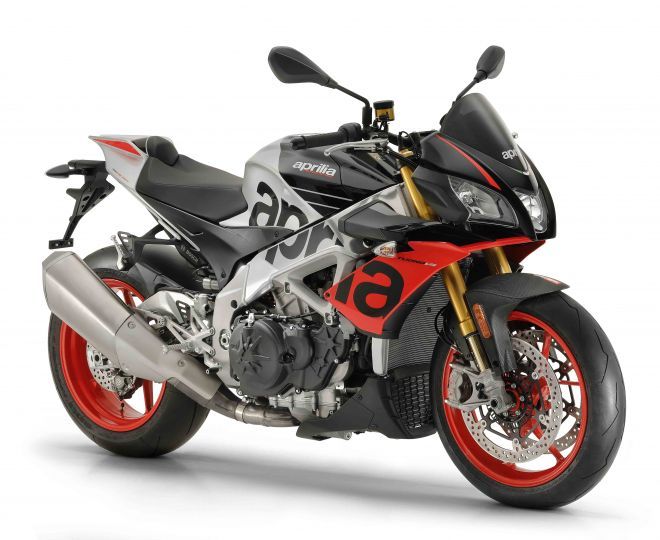 The 2019 Tuono V4 1100 debuted with new Ohlins semi-active suspension that is capable of acting on both the front and rear suspension independently or via preset riding modes. In semi-active mode, its Smart EC 2.0 system collects data from suspension, brakes, throttle and the IMU to automatically adjust suspension setting to suit both the tarmac and the rider's riding style. While the race-bred RSV4 does not get these updates, Aprilia might be holding back the updated RSV4 unveil for EICMA next month. 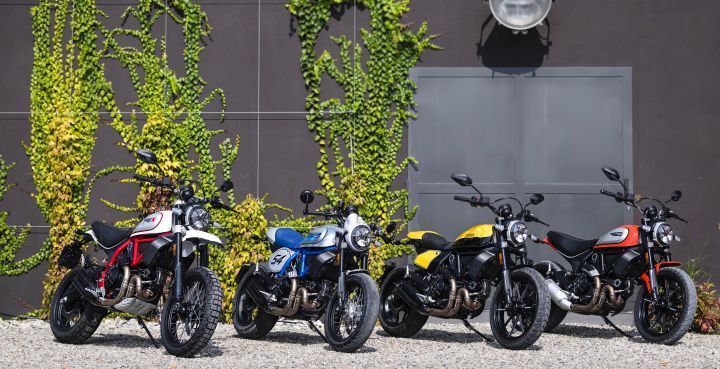 Ducati has followed up its ‘updated for 2019’ Scrambler Icon with three variants. The Full Throttle, Cafe Racer and Desert Sled now get updates that surprisingly makes them even more desirable. The Full Throttle draws inspiration by a flat track race bike, while the Cafe Racer is inspired by cafe racers of the 70’s. The Desert Sled looks even more retro with that red frame. They also get relevant feature updates for 2019. 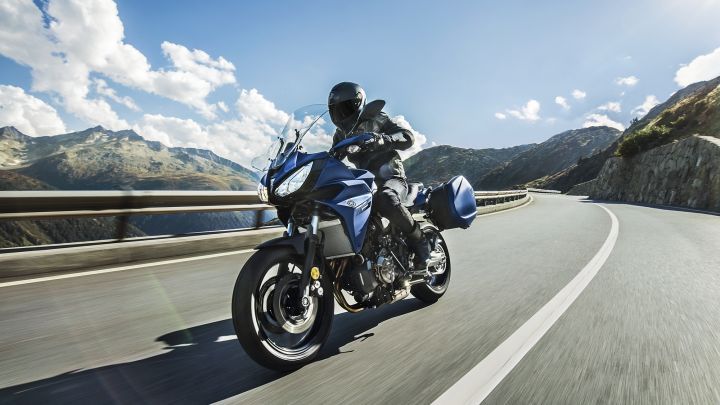 The Tracer GT is a more capable tourer now, thanks to the addition of a higher windscreen, knuckle guards, comfort seat and panniers. To cope with the extra weight, Yamaha has tuned the telescopic front forks and rear linked monoshock. Know more about this bike here. Yamaha also showed off its MT naked motorcycle range with new colour options.

Like the new 2019 BMW R1250GS, the R1250RT gets a new 1254cc boxer twin motor. It gets variable valve tech which BMW calls ShiftCam. Power is up to 136PS as is the torque which now stands at 143Nm. Electronics include two riding modes, automatic stability control (ASC) and hill start control. 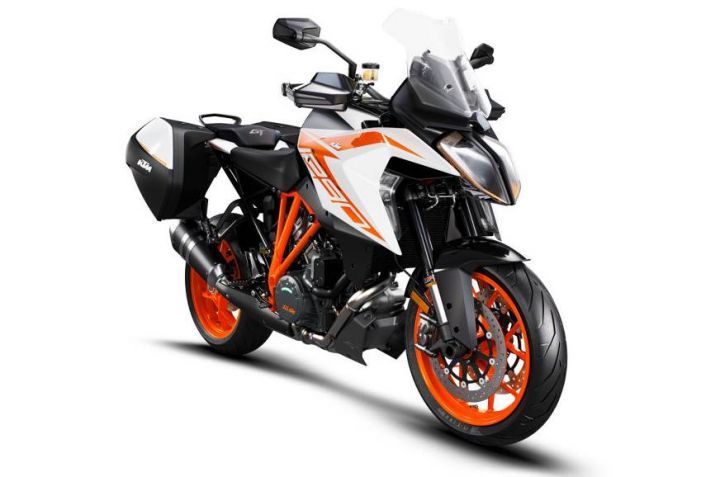 While the Super Duke R gets only cosmetic updates in the form of ABS, it is the KTM Super Duke GT that gets the most attention for 2019. For starters, there is the redesigned front end. Then you have electronically adjustable WP suspension that can be set to Comfort, Street, Sport and an optional ‘Track mode’. New features include a 6.5-inch TFT instrument console with smartphone connectivity, cornering lights integrated into the tank shrouds, larger windscreen, heated grips, a lean-angle sensor for braking and traction control. More details here. While we hoped to see the KTM 390 Adventure concept here, it seems like we might have to wait for that bike till EICMA. 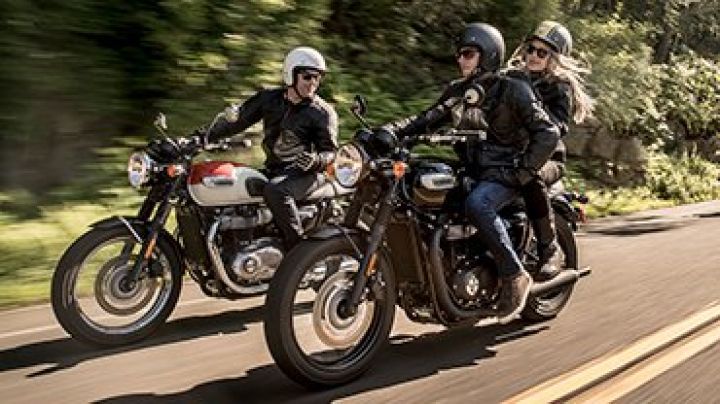 For 2019, the Street Twin and Street Scrambler get significant mechanical changes. The 900cc parallel-twin motor gets magnesium covers, a lighter clutch, and crankshaft and a new balancer shaft. Power, at 65PS, is up by 10PS while engine redline is up by 500rpm. While torque remains the same at 80Nm, it now comes 600rpm higher in the rev band. Brakes have also been upgraded to Brembo four-piston units, from the earlier Nissin two-piston ones.