Down 76-6, it was almost curtains for the Proteas. But a certain Justin Kemp (100 n.o.) and Andrew Hall (56 n.o.) turned the script around with their 138-run unbroken eighth wicket stand off just 87 balls. Their bowlers took over and ensured 274 rema 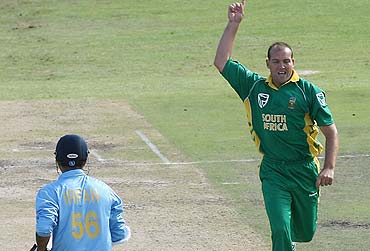 India had South Africa on the mat but lost the plot completely to suffer an embarrassing 106-run defeat in the third one-dayer today.

The Indians had the home team in dire straits at 76 for six but allowed them to wriggle out to an imposing 274 for seven, built around Justin Kemp's maiden ton.

The visitors then put up a spineless display with the bat to be bundled out for 168 in 41.3 overs and give the South Africans an unassailable 2-0 lead in the five-match series.

The first match was washed out without a ball being bowled.

India's chase was never on after they were reduced to 44 for four, although skipper Rahul Dravid (63) and Mahendra Singh Dhoni (55) led a minor recovery with a counter-attacking fifth-wicket partnership of 85 runs.

The hosts owed their total to Kemp's mastely knock of 100 not out that came from only 89 balls and his match-winning unbroken partnership of 138 runs with Andrew Hall.

Hall himself came up with an all-round performance, hammering a rapid-fire 56 from 47 balls and then chipping in with three for 45.

The Indian batsmen once again had no answer to the pace and swing of the evergreen Shaun Pollock who ripped the top order with four for 26.

The teams square up again in the fourth one-dayer at Port Elizabeth on Wednesday.

India would be haunted by the fact that in bright sunny conditions, with no excuse of having to bat second under the lights, they could manage only 168, that too when South Africa appeared to have taken their foot off the pedal.

South Africa wriggled out of an almost impossible situation through a record 138-run stand for the eighth wicket between Kemp and Hall which came off only 87 balls and was highlighted by 111 runs they put in the final nine overs.

Kemp's maiden century in his 62nd match arrived in only 89 balls with six fours and seven sixes. Crucially, he took only 22 balls for his second 50.

Hall, a last-minute selection ahead of Andre Nel who had a chipped nail, pulled his weight no less impressively in stroking his runs from only 47 balls with seven fours and later picking up two wickets against the hapless visitors.

India's batting blues began almost as soon as their innings started rolling, Virender Sehwag slashing one into the hands of third man fielder.

Sachin Tendulkar's wish to deal with short-pitched bowling in a forthright manner met a disastrous end when he mistimed a pull into the hands of square leg fielder.

Mohammad Kaif became Pollock's third victim in his first spell when his attempted pull actually ended up putting his stumps in disarray.

From there on, South Africa took it easy and the Indians could notch a few runs on the board, most notably Dhoni who struck three fours and four sixes before being caught brilliantly at square leg fence by Loots Bosman.