But there were also those who appreciated the focus on education, health, agriculture. And those who realised that it could have been far worse than what it turned out to be. 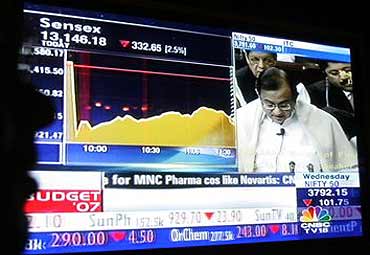 Habil Khorakiwala, FICCI president and Wockhardt chief: It (Budget) would send wrong signals at a time when India Inc was expecting rationalisation in corporate tax rates to yield larger revenues. Measures like bringing ESOPS under the FBT net, extension of MAT to IT sector and service tax on rental property for commercial purpose would also put additional burden on the corporate sector. One does not understand how the multiple taxes should be charged. I think the feeling of the chamber is that the Finance Minister has lost an opportunity of providing relief to the corporate world.

V.N. Dhoot, Assocham president and Videocon Group chairman: The impact of increase in DDT on corporates to 15 per cent would be negative on growth, investor sentiment and capital markets. Chidambaram should have clarified policy on SEZ and made it transparent in the Finance Act, while the reforms in banking and insurance sectors needed to be liberalised further.

R. Sesashayee, CII president: This Budget is disappointing as no steps have been announced to increase productivity in agriculture, electricity and other sectors which are not producing up to their potential. Since revenues from peak customs and excise are increasing, this could have been a time to reduce excise duty to 20 per cent, if not 15 per cent overall, which would have been in line with the Kelkar Committee Report.

Sunil Mittal, Bharti Group chairman: There was not much choice in the hands of the Finance Minister. We asked to simplify duties on the telecom sector and that has been addressed by setting up of a committee.

Rahul Bajaj, chairman Bajaj Auto and Congress MP: In the present circumstances, from the corporate point of view it could have been a very bad Budget, but it is not. Baring the dividend distribution tax, it is a very good Budget.

Pawan Munjal, Hero Honda managing director: No big reforms, it was a populist Budget with focus on Bharat Nirman, agriculture and health care. No direct focus on the auto sector.

Jagdish Khattar, Maruti Udyog managing director: Nothing is there for the auto sector in the Budget. Presently it is a disappointment, but emphasis on agriculture and education are welcome steps.

D.D. Rathi, Grasim CFO: The tax structure is a hybrid type and cement contributes very low in inflation. So I see no reason why such steps should be taken.

Gautam Singhania, chairman & managing director, Raymond Ltd: For the textile industry, the Budget has been generally positive. The TUF scheme has been extended till the end of the 11th plan period. Allocation under the TUF scheme for the next year has been increased which should expedite the release of the subsidy. Peak rates of the duty have been cut and import duties on polyester have been reduced. Increased allocation to textile-integrated parks is very welcome as it will boost the set up of additional capacities to cater to the growing domestic market and export.

Malvinder Singh, CEO & MD of Ranbaxy: It is good that the FM did have so many positive announcements to make for the healthcare sector because that is very important for the economy to move forward.

B. Muthuraman, managing director, Tata Steel: The Budget is more focused to bring the under-performing sectors to perform, without jeopardizing the growth trajectory of the overall economy. However, the increase in dividend distribution tax and cess on education, though, would increase the tax burden on the corporates. The increased investment in sectors such as agriculture, education, health and infrastructure will contribute to sustain the growth in the long term. While the increased investment in health and education is going to bring about inclusive growth, the increased focus on infrastructure would support increase in the demand for manufactured goods as well as make the manufactured goods cost competitive in the long run. The focus on agriculture sector is positive for the economy in the long term. The actions on reduction in indirect taxes on some products is specifically to contain the inflation from the fiscal side, which is more prudent to sustain the growth as the RBI has taken enough steps on the monetary side. The introduction of export duty on iron ore and chrome ore is a very welcome move and is directed towards conserving the scarce resources of the country for the long term benefit of the country. Though, restricting exports volume could also have been considered. The budget as such is neutral towards the steel sector. Increase in dividend distribution tax and education cess is certainly negative from the investor point of view.

Naresh Trehan, CII national health care committee chairman: The steps are in the right direction, it is very positive. But it remains to be seen how the implementation of National Rural Health Mission takes place. A 21% increase in outlay for the health segment is certainly appreciable, but health care should have been given the status of infrastructure.

Ruchir Sharma, Morgan Stanley Head (Emerging Markets): In absolute terms this Budget may turn out to be insipid. This is disappointing compared to previous ones.