In the corridors of Nabanna the perception is that Kolkata must become London, quite forgetting that the city was actually based on the London model 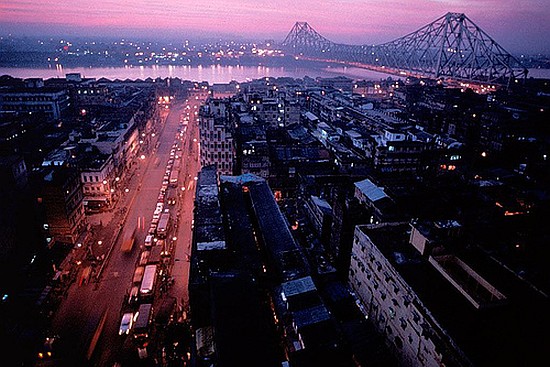 At Barrackpore Police Station, twelve horsemen wait to ride out into Calcutta and transform it into London. Every day they are carefully dusted and looked after and left to their contemplation of a place where the War of 1857 first flamed.

Confronting the Empress of India stands an anorexic Sri Aurobindo supporting blue and white 'toony bulbs' at night as do most of the other later statues. At the crossing of Burdwan and Judges Court Road on August 15 a fountain springs up of unreal Roman figurines — equally anorexic — in a dream of Eros sprung via Piccadilly.

At a meeting in a movie complex christened by Satyajit Ray, a Ministry official breathes a promise of renovated heritage buildings with slight changes and says that what are needed are stories to bring value perceptions to the buildings. For the rest, with a shrug he adds, Donde esta la dinero?

Heritage is an odd thing — your perception of heritage might not be mine. I might decide my mansion is ruinously expensive to maintain, my parents need a lift to get them up the steep flights of red marble stairs to their bed and that it might be better off as a block of easily manageable flats where I can ensure someone wipes some of the floors.

But that might not be the view of a Nobel Prize winner who is supporting a move to turn an area of buildings from the 1920's and 30's in South Kolkata, into a Living Museum. Berlin has done it and some other cities with success. Along with the houses in the Living Museum, the householders too will apparently become living artefacts.

In the corridors of Nabanna the perception is that Kolkata must become London, quite forgetting that the city was actually based on the London model and that there are some bylanes in London that might, at night confuse you into forgetting which city you were in. Heritage also wears the colours of Mother Teresa's robe or, some say, those of that Bengali fashion statement the hawaii chappal. All this makes for some interesting discussions where the Berlin example, the London example and even the Paris example are tossed around by committees to appear in the newspapers within a few days and set heads nodding, but then what?

West Bengal is cash strapped. Industry needs land, the state needs industry and in between are the realtors to whom land symbolises power, the new zamindars you might say out to buy and sell at a profit. Except that it all lies bogged down by the game of who is going to win the elections and pieces are moved and disappear, sometimes overnight.

The future can perhaps be glimpsed through a ball with the acid green letter 'B' on it. It replaced a statue by Shanu Lahiri overnight with no warning. It portends a spidery gate for Rajarhat and many similar landmarks staking the new order's claim to Kolkata. And proving that what Bengal thinks today still holds good, a Madhubani painting by a dying artist was white washed over in a Delhi museum. Gariahat tram depot shut its doors quietly on August 15. The land in Tollygunge tram depot has already been sold. Gradually depot by depot the trams which were part of the city's mobile sustainable heritage will disappear, perhaps to be exiled to Barrackpore to join the twelve horsemen of the Colonial apocalypse while malls rise in their echoing courtyards and more cars and buses belch pollution.

Let us all gather round and tell sad stories of the death of buildings while someone hunts for the dinero over the next six months and peers into that green globe.