Text of the statement by Defence Minister George Fernandes during a press conference at the Indian Embassy in Washington, Jan 17. 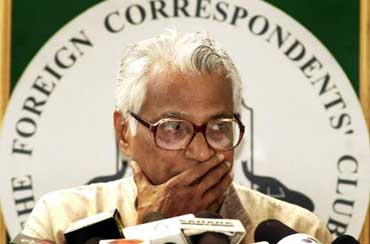 outlookindia.com
-0001-11-30T00:00:00+05:53
I arrived yesterday on an official visit to the United States and will be here till Sunday, January 20. I am grateful to Secretary Rumsfeld for his gracious invitation and for arranging the very wide ranging discussion that our two delegations conducted today. I had the honour of being received this afternoon by the United States Vice-President, Mr. Richard Cheney and also held discussions with the US National Security Adviser, Dr. Condolezza Rice and US State Department with Deputy Secretary of State, Mr. Richard Armitage.

The purpose of this visit to the United States was to discuss issues of defence cooperation between the US and India and those of immediate concern in the sub-continent as well as our cooperation in the global campaign against terrorism with the leadership of the United States. This purpose has been fully served by today’s meetings.

My discussions also provided me an opportunity to review military-to-military relationship between the two countries which has not only been revived during the last one year but also been expanded considerably. Today this relationship is qualitatively different from the days of Cold War. After Secretary Rumsfeld’s visit to India in November 2001, we held a successful meeting of the Defence Policy Group(DPG) after a gap of four years. The next meeting of the Group is to be held in May 2002 and before that we will have a meeting of Executive Steering Groups as well as joint exercises between the two armed forces. We have also recently signed the General Security on Military Information Agreement (GSOMIA) which will facilitate the transfer of classified US military information to India.

The issue of defence supplies to India which form an important part of our relationship was also reviewed during our discussion today. Several pending cases of supplies of defence equipments and spare parts from US to India, such as engines and other systems of the Light Combat Aircraft and Weapons Locating Radar were discussed. We have been assured that these licenses are in an advanced stage of processing with the US authorities and final decisions are expected to be conveyed shortly.

As two multi-ethnic, multi-religious open democratic societies India and the United States share a unique perspective against global terrorism and the events of the last three months have deepened our understanding of each others’ concerns. India appreciates the strong stand taken by the United States’ leadership after September 11 and has fully supported the campaign launched by President Bush to end terror wherever it exists.

I shared with the US leadership the deep concern and anger of the Indian people after the attack on the Indian Parliament on December 13. That attempt, which was foiled by our security forces, struck at the most cherished values of our democracy and was aimed to liquidate the entire political leadership of the country. The people of India cannot accept such acts of terrorism any more. We have been pushed beyond our threshold of tolerance. Our resolve is fully understood in Washington.

Naturally the situation in South Asia also came up for discussion, I conveyed our perspective on the situation in the light of the recent statement made by the President of Pakistan. Measures that have been announced will have to be effectively and fully implemented so as to permanently end infiltration and sponsorship of terrorism from Pakistan or territories under its control into India. One measure of Pakistan’s sincerity will be its willingness to hand over 20 well known terrorists whose names along with abundant evidence of crimes against India have been handed over to the Government of Pakistan.

Meanwhile, India stands ready to defend its territory and our armed forces are committed to this task. De-escalation of forces can come only when cross-border terrorism has been effectively stopped. Let me add that we are hoping that things will move in the right direction quickly and we have undertaken intense diplomatic action to resolve the issue peacefully.

Given the shared strategic interest in Asia and beyond between our two countries and the common democratic traditions, we are confident that a growing defence and security cooperation between our two countries will serve the interests of freedom, global peace, economic progress and security. A strengthened strategic relationship is keeping with the commitment of the two countries to qualitatively transform Indo-US relations in pursuance of many common goals in Asia and beyond and form a critical part of the wide ranging bilateral dialogue architecture established in March 2000.
For in-depth, objective and more importantly balanced journalism, Click here to subscribe to Outlook Magazine