Chandrababu Naidu’s dream capital project of Amaravati could be in further trouble as the World Bank has turned down a loan of USD 300 million to finance the project.

The World Bank’s website says that the “Amaravati Sustainable Infrastructure and Institutional Development Project” has been dropped. 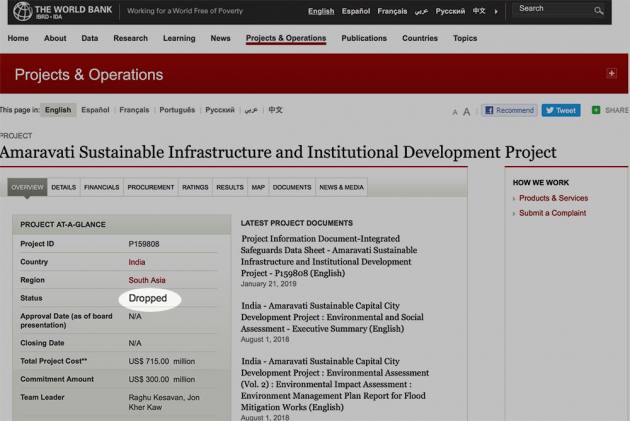 The World Bank’s action could seriously affect the future of the project which has already swallowed Rs 45,000 crore worth of public money with less than twenty per cent of the work completed. In fact most contractors have stopped further construction after Naidu was voted out and Jagan Reddy became the Chief Minister as the state government stopped releasing fresh payments.

The Andhra Pradesh Capital Region Development Authority (APCRDA) Commissioner Dr. P. Lakshminarasimham, however, clarified that there was no official word from the World Bank yet. The lending process had reached the last leg and it was hoped that the Jagan Reddy government would give the final push to procure the loan.

The APCRDA had sent in its application in 2016 seeking the loan of which World Bank would lend $300 million and the remaining $200 million would come from Asian Infrastructure Investment Bank (AIIB). But the loan process got stalled after a few farmers from the Amaravati capital region complained to the bank’s inspection panel that there had been irregularities in land procurement and many farmers were coerced into parting with their land. According to senior officials, the inspection panel after visiting some villages and talking to farmers and APCRDA officials, decided to give a go ahead for the loan process. But apparently the change of government has given it second thoughts about the feasibility and the future of the project.

The World Bank’s latest thumbs down could see other international collaborators also distancing themselves from Amaravati. The Singapore government, which has drawn up the master plan for the capital city, has also been cold shouldering the project of late. If further financing stops, Amaravati could very well become India’s largest incomplete infrastructure project.