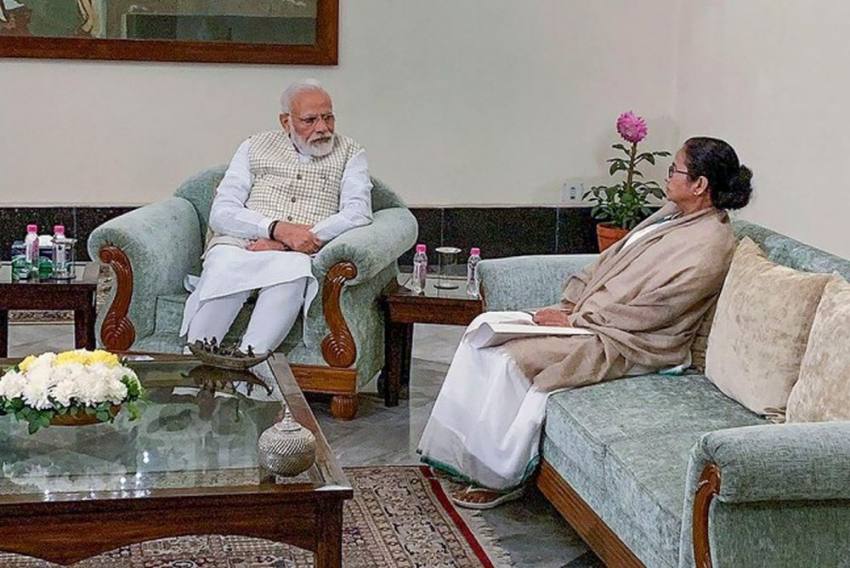 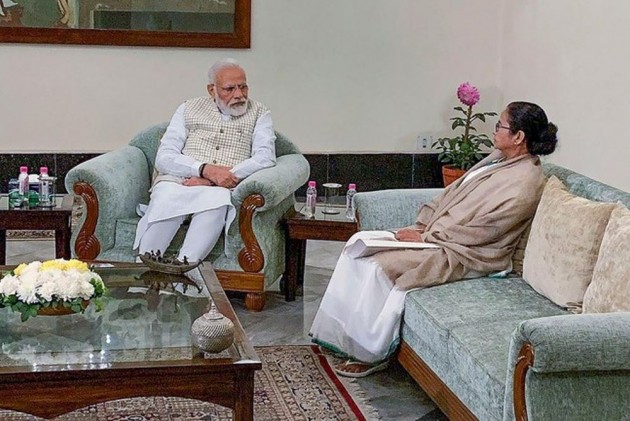 Prime Minister Narendra Modi faced protests when he landed Kolkata airport on Saturday for his two-day visit to the state.

The protests against the Citizenship Amendment Act (CAA) got a boost as Congress and the Left parties had called for protests in wake of PM Modi's visit.

Protesters had gathered near airport even before the Prime Minister had landed. They carried black flags and placards that read slogans against NRC and CAA.

Protests were also held in Jadavpur University area, Dharmtala, near Raj Bhavan, Kidderpore, Hastings, College Street and in other areas.

Due to the protests at airport, the police had to close the VIP Road -- the main arterial road linking the airport to the city. Alternate arrangement was made to take the Prime Minister from the airport to the Raj Bhavan by air. Chief minister Mamata Banerjee was already waiting at Raj Bhavan to welcome him.

The two leaders, who have been at daggers drawn, had a brief meeting. After the meeting, Banerjee said she had told the PM to withdraw CAA and NPR.

Despite her strong opposition to the proposed NRC and CAA, Mamata Banerjee has come under severe criticism after she decided to stay away from the Opposition meet at Delhi on January 13.

The meeting has been convened by Congress leader Sonia Gandhi to chalk out a joint strategy to take forward the protests against the CAA, NRC and NPR.

The anger among the people against Banerjee was evident even on Saturday when slogans were raised by some people questioning TMC supremo's 'intent' to oppose the BJP.

To dispel any misgivings about her 'intent', Banerjee, after she came out of Raj Bhavan, made an unscheduled stop in front of media and tried to explain her position.

Mamata said, "It is my constitutional duty to meet and receive the President and the Prime Minister of our country when they come to the state. Also, in case a head of the state of another country visits, I have to do the same. Also, it is a matter of courtesy, so I came here (Raj Bhavan) to receive him."

She then explained that there were around Rs 35,000 crore outstanding funds with the central government. Of that, Rs 28,000 crore are due on various accounts. In addition to that the state government has asked for Rs 7,000 crore against the devastation caused by cyclone ‘Bulbul’ in south Bengal, she said.

“I requested the PM to urge his departments to clear the state’s dues as early as possible. He said that he would consider that after going back to Delhi, and he asked me to discuss the matter in a meeting with him at Delhi,” she added.

However, she reminded the press that she had made it clear to Narendra Modi that the state is opposed to the CAA, NRC and NRP. "The people do not want to have any discriminatory law or measures to be put in place and deprive some people from citizenship."

The meeting assumes significance as the new citizenship law has emerged as the latest flashpoint in the state. Banerjee's Trinamool Congress is opposing the contentious legislation tooth and nail and the BJP is pressing for its implementation.

Just after the meeting,  Banerjee went straight to TMC students wing sit-in demonstration in the city against CAA, where she reiterated her stand that the new Citizenship law would never be implemented in Bengal.

After inaugurating the renovated Old Currency Building at Dalhousie, and witnessing “Light and Sound” programme of Howrah Bridge from Millenium Park on the bank of Ganga, PM Modi went to Belur Math where he will spend the night.

On Sunday, he will participate in the 150th anniversary celebration of Kolkata Port Trust at Netaji Indoor Stadium. There Mamata is expected to share the stage with the Prime Minister Modi and the Governor Jagdeep Dhankhar.