Chief of Defence Staff Gen Bipin Rawat on Friday announced that the three services will carry out a series of activities to thank the "corona warriors". 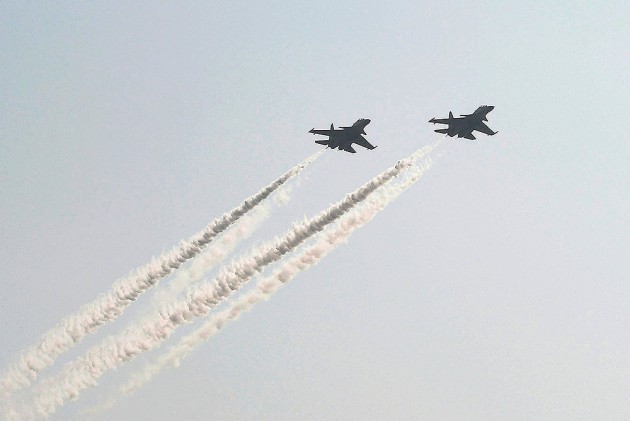 The Indian Air Force (IAF) conducted a fly-past over Dal Lake in Srinagar and Rajpath in Delhi on Sunday morning to express gratitude to medical professionals and other frontline workers at the forefront of battle against the deadly Coronavirus. Later, similar exercises followed in other cities.

The first fly-past was held in Srinagar, capital of Jammu and Kashmir.

Afterwards, Delhi's Rajpath saw a fly-past. An IAF chopper also showered flower petals on the Police War Memorial in order to express to pay tribute to police officials for their contribution in the fight against COVID19 pandemic.

#WATCH IAF chopper showers flower petals on the Police War Memorial in order to express to pay tribute to police officials for their contribution in the fight against COVID19 pandemic#Delhi pic.twitter.com/XmKDBOAtfJ

In Haryana, an IAF chopper held a flypast over the Government Hospital in Panchkula. An Indian Army band performed outside the hospital to express gratitude towards medical professionals as well.

The IAF has made elaborate arrangements to conduct aerial fly-pasts and shower flower petals on hospitals treating COVID-19 patients in other cities, including Mumbai and Jaipur.

The Navy will light up ships at sea to express gratitude to lakhs of doctors, paramedics, sanitation staff and other front-line workers.

Chief of Defence Staff Gen Bipin Rawat on Friday announced that the three services will carry out a series of activities to thank the "corona warriors".

The thanks-giving activities started with laying of wreaths at the police memorial in Delhi and in several other cities. It will be followed by fly-pasts by fighter jets and transport aircraft of the Indian Air Force, covering a sizeable number of cities and towns across the country beginning 10 AM, officials said.

They said fighter aircraft formations, comprising Sukhoi-30 MKI, MiG-29 and Jaguar, will be flying over Rajpath, Delhi's centrepiece boulevard, and will orbit over the city for around 30 minutes from 10 AM.

"In addition, C-130 transport aircraft will follow a similar profile as fighters covering the entire Delhi and NCR region. The aircraft will be flying at an approximate height of 500 metres to 1000 metres keeping aerospace safety in mind especially in respect of bird activity," an IAF official said.

He said the fly-past is combined with the training activity of the IAF.

Helicopters from the IAF and Indian Navy will fly over hospitals treating coronavirus patients and shower petals as a tribute to the corona warriors, the officials said.

Navy officials said the Western Naval Command will illuminate five naval ships from 7:30 PM to 11:59 PM off the Gateway of India in Mumbai.

They would display banners like "India Salutes Corona Warriors" and will sound the siren of the ships and fire flares at 7:30 PM at anchorage. Additionally, the Naval air stations at Goa would organise a human chain on the runway to honour the 'corona warriors'.

The Eastern Naval Command will illuminate two ships at anchorage from 7:30 pm to midnight at Visakhapatnam coast.

"The nation stood together and showed resilience in dealing with the coronavirus pandemic. On behalf of armed forces, we want to thank all the corona warriors -- doctors, nurses, sanitation workers, police, home guards, delivery boys and media," Gen Rawat said on Friday.

So far, the coronavirus has infected 37,776 people in India and claimed 1,223 lives, according to the Union Health Ministry on Saturday.

Gen Rawat's announcement about the special activities came shortly before the Union Home Ministry said the the current spell of the lockdown will be extended by another two weeks from Monday.

The lockdown came into force on March 25 and was to end on April 14. It was first extended till May 3.