Will Give 10 Lakh Jobs Even If It Means Withholding Salaries Of CM, MLAs, Ministers: Tejashwi Yadav

Tejashwi Yadav has promised that he would sanction 10 lakh jobs in his very first cabinet meeting if he comes to power. 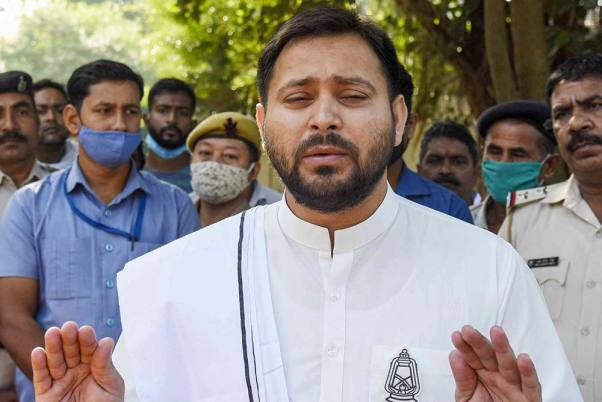 RJD leader Tejashwi Yadav Monday said he will implement his poll promise of giving 10 lakh jobs even if that means withholding the salaries of the chief minister, ministers and MLAs.

Referring to the constant criticism his RJD has received over its performance during its 15-year rule between 1990-2005, he said some people are "stuck on the stale pages of history, but we care for Bihar’s future" and appealed to people to give him "one chance" to govern.

Speaking at on online event of his party, he questioned Chief Minister Nitish Kumar’s assertion that he has provided six lakh jobs during his 15-year rule compared to RJD's 95,000.

"He (Nitish Kumar) keeps repeating he has given six lakh jobs during his 15-year rule. But he never says all these were contractual jobs, not permanent ones," Tejashwi told the 'Naukri Samwad' programme.

He has promised that he would sanction 10 lakh jobs in his very first cabinet meeting if he comes to power.

Chief Minister Kumar and his deputy Sushil Kumar Modi have often questioned as to from where the money for these many jobs will come.

Kumar had also said Monday that giving 10 lakh jobs would result in an additional annual burden of Rs 1.44 lakh crore on the state exchequer and wondered if the RJD would shelve other development works or delay salaries of employees to implement this pledge.

Tejashwi responded, saying he would get Rs 80,000 crore that remains "unused" from that state budget and would also pool in Rs 24,000-25,000 crore that the state gets from the Centre under the Right to Education but returns it.

"Still if they (Nitish Kumar and Sushil Modi) feel that we will need more money, we will withhold the salaries of the chief minister, ministers and MLAs," the Mahagathbandhans chief ministerial candidate asserted.

He also promised that education loans up to Rs 5 lakh would be waived off.

Tejashwi and his parents -- former chief ministers Lalu Yadav and Rabri Devi -- have often been excoriated by the BJP and the JD(U) over their partys record on law and order, corruption and other parameters of social wellbeing of the state.

The 31-year-old former deputy chief minister has also been ridiculed by his rivals for "lack of experience".

Tejashwi Monday said nobody can raise a finger on his record and work as a deputy chief minister for 18 months.

"Those who are raising questions, please ask them how Tejashwis was works during those 18 months," he said.

"Some people are stuck on the stale pages of history, but we care for Bihar’s present and its future. We will definitely seek one chance from you (people). Vote for a Mahagathbandhan government rising above caste and religion," he said.