Home  »  Website  »  National  »  ‘Will Amount To Contempt Of My Conscience’: Prashant Bhushan Refuses To Apologise For His Tweets

‘Will Amount To Contempt Of My Conscience’: Prashant Bhushan Refuses To Apologise For His Tweets

Prashant Bhushan told the Supreme Court that 'an apology for expression of his beliefs, conditional or unconditional,' would be insincere. 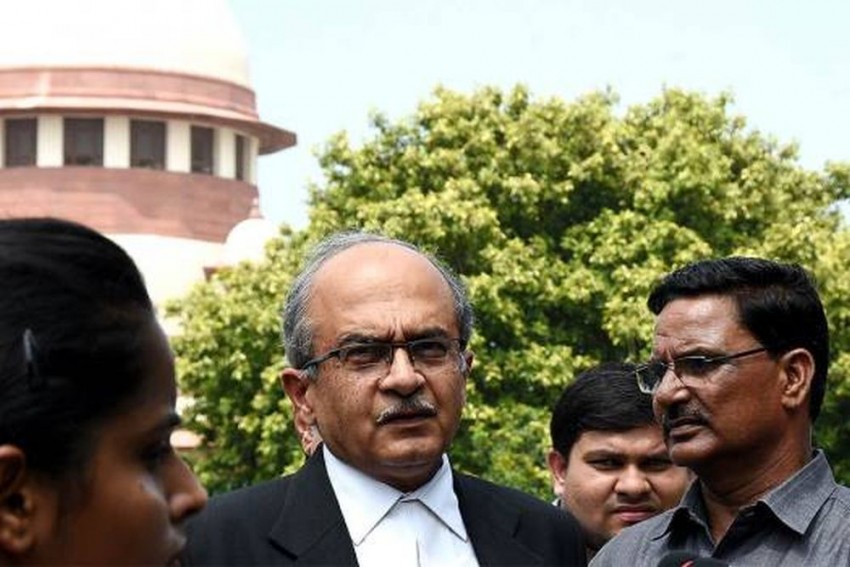 Activist-lawyer Prashant Bhushan refused to offer an apology to the Supreme Court on Monday for his two tweets against the judiciary saying what he expressed represented his bona fide belief which he continued to hold.

An insincere apology would amount to the contempt of my conscience and of an institution, Bhushan said in his supplementary statement filed in the suo motu contempt case against him by the top court

An apology for expression of his beliefs, conditional or unconditional, would be insincere, he said.

Bhushan said as an officer of court he believes as a duty to speak up when he believe there is a deviation from its sterling record.

“Therefore I expressed myself in good faith, not to malign the Supreme Court or any particular Chief Justice, but to offer constructive criticism so that the court can arrest any drift away from its long-standing role as a guardian of the Constitution and custodian of peoples’ rights,” he said.

Also Read: To Punish Or Not To Punish: Prashant Bhushan's Defiance Puts SC In Stalemate

Bhushan further said that an apology cannot be a mere incantation and any apology has to, as the court has itself put it, be sincerely made.

“This is especially so when I have made the statements bonafide and pleaded truths with full details, which have not been dealt with by the Court. If I retract a statement before this court that I otherwise believe to be true or offer an insincere apology that in my eyes would amount to the contempt of my conscience and of an institution that I hold in highest esteem,” he said.

On August 20, the top court had granted time till August 24 to Bhushan to reconsider his “defiant statement” refusing to apologise and tender “unconditional apology” for contemptuous tweets against the judiciary and rejected his submission that quantum of punishment be decided by another bench.

Also Read: No Reason To Apologise, Your Honour

“I did not tweet in a fit of absence mindedness. It would be insincere and contemptuous on my part to offer an apology for the tweets that expressed what was and continues to be my bona fide belief. Therefore, I can only humbly paraphrase what the father of the nation Mahatma Gandhi had said in his trial: I do not ask for mercy. I do not appeal to magnanimity," Bhushan had said in his statement to the court on August 20.

"I am here, therefore, to cheerfully submit to any penalty that can lawfully be inflicted upon me for what the Court has determined to be an offence, and what appears to me to be the highest duty of a citizen,” he had said.

The apex court, on August 14, had held Bhushan guilty of criminal contempt for his two derogatory tweets against the judiciary saying they cannot be said to be a fair criticism of the functioning of the judiciary made in the public interest.

He faces simple imprisonment of up to six months or with a fine of up to Rs 2,000 or with both as punishment.

Also Read: Why I Defend Prashant Bhushan’s Right To Offend

On July 22, the top court had issued a show cause notice to Bhushan after initiating the criminal contempt against him after taking note of a petition.

While referring to the tweets by Bhushan, the apex court had earlier said these statements are prima facie capable of "undermining the dignity and authority" of the institution of the Supreme Court in general and the office of Chief Justice of India in particular, in the eyes of the public at large.