'Some people say they are tigers. I am not even a tiger, but I am also not a paper tiger. Now the people of the state will decide who is who,' Kamal Nath said. 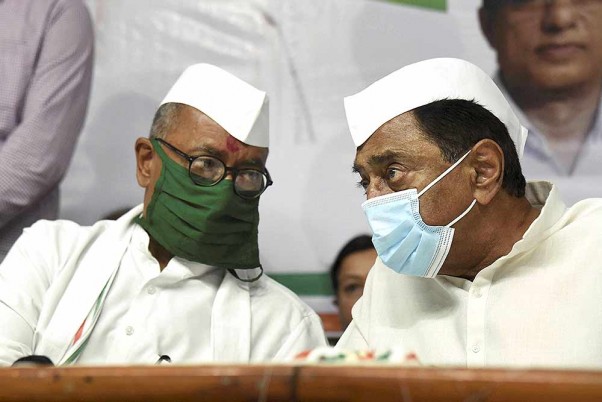 Madhya Pradesh Congress chief Kamal Nath on Friday took a veiled swipe at Jyotiraditya Scindia, his one-time rival in the party and now a BJP MP, over his statement that ‘Tiger abhi zinda hai’.

Speaking after the Shivraj Singh Chouhan government's expansion on Thursday, Scindia, whose exit from the Congress with 22 MLAs toppled the Nath government in March, said he wanted to tell Congress leaders that "Tiger abhi zinda hai".

Speaking at a function in Ratlam district, Nath referred to the remark, and asked, "Which tiger is alive, paper tiger or a circus one?

Scindia, who belongs to a former royal family, is sometimes called `Maharaja' in state politics, while Chouhan's popular nickname is `Mama' (uncle).

"I have not even sold tea, I am just Kamal Nath," he said, in a jibe at the prime minister.

"Some people say they are tigers. I am not even a tiger, but I am also not a paper tiger. Now the people of the state will decide who is who," the Congress veteran added.

"Wherever Chouhan goes, he makes tall announcements... He will say we have given this much money to labourers, but during lockdown all of us have seen that they are just wandering here and there. None of them have got any money," Nath said.

Earlier, commenting on reports of resentment within the BJP over the expansion of Chouhan ministry on Thursday during which many former Congress MLAs were inducted, Nath said it was the BJP's internal matter.

But the Chouhan government was a "government of bargain and the ministry of bargaining", he said, speaking to reporters.

"Out of 33 ministers, 14 are not MLAs. Is it bargaining or not? They are bringing disrespect to Madhya Pradesh and its people in the entire country....We are feeling ashamed of the kind of politics that is going on in Madhya Pradesh," he said.

"This kind of politics never took place in the state before," the former chief minister added.

"He always worked for protecting values. His work is still an example for all," Nath said during the function.