IG (VIP Security) Yashovardhan Azad, who was a security liaison officer with the Indian cricket team on its 2004 tour, says he has only fond memories of the series – on and off the field 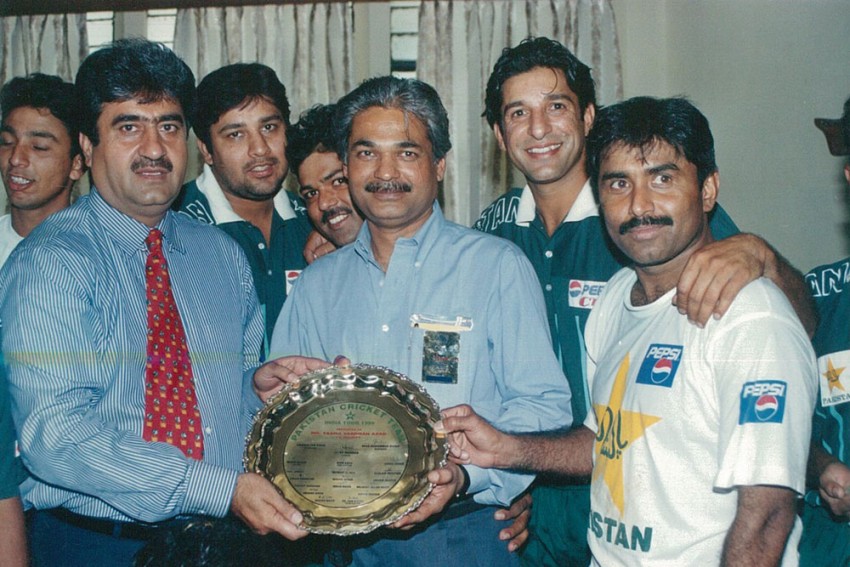 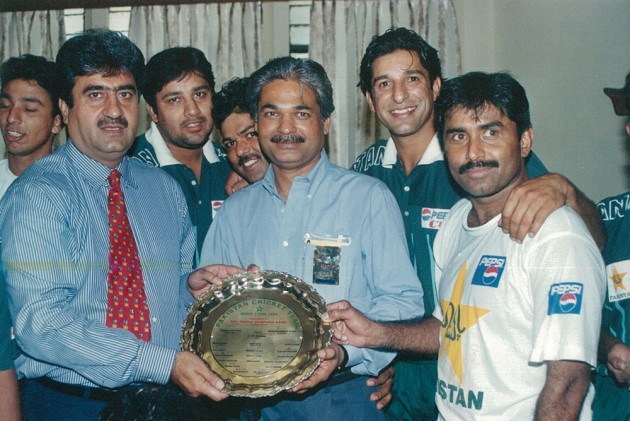 Can you imagine a Deputy Inspector General of Police (DIG) of Lahore asking a top Indian policeman to sit on his chair to write his comments on the visitors’ register after the police band received him with popular Indian song ‘awara hoon...’ from Raj Kapoor’s all-time hit film Awara? Or, him being invited by former Pakistan captain and fast bowler Wasim Akram over dinner that would end at 3 am? Or, him sitting on the terrace of a five-star hotel in the war-ravaged-but-very-hospitable Peshawar, eating delicious non-vegetarian dishes on a chilly night with burning coal providing the warmth?

In the present circumstances, given the India-Pakistan hostility post-Pulwama, all these scenarios, of course, can’t be imagined. But all the above events actually did take place -- in early 2004, during India’s historic cricket tour of Pakistan, the first after almost 15 years, after a sudden, unexpected thaw in India-Pakistan relations. And the Indian police officer in question is Yashovardhan Azad, who retired from the police service as Secretary (Security), Cabinet Secretariat, in 2013, to join Central Information Commission (CIS).

Azad, son of former Bihar Chief Minister Bhagwat Jha Azad, first conducted a recce of the Pakistani match venues where the Indian team was going to play and then accompanied the team on the 38-day long tour. Today, Azad cherishes all those fond memories, momentoes and photos (see accompanying photos). “One really felt that it was a good time and cricket was, in a way, used as a soft diplomacy and it was successful also, I would say. It was a wonderful experience,” Azad, who turns 65 this month, tells Outlook in an Exclusive Interview. 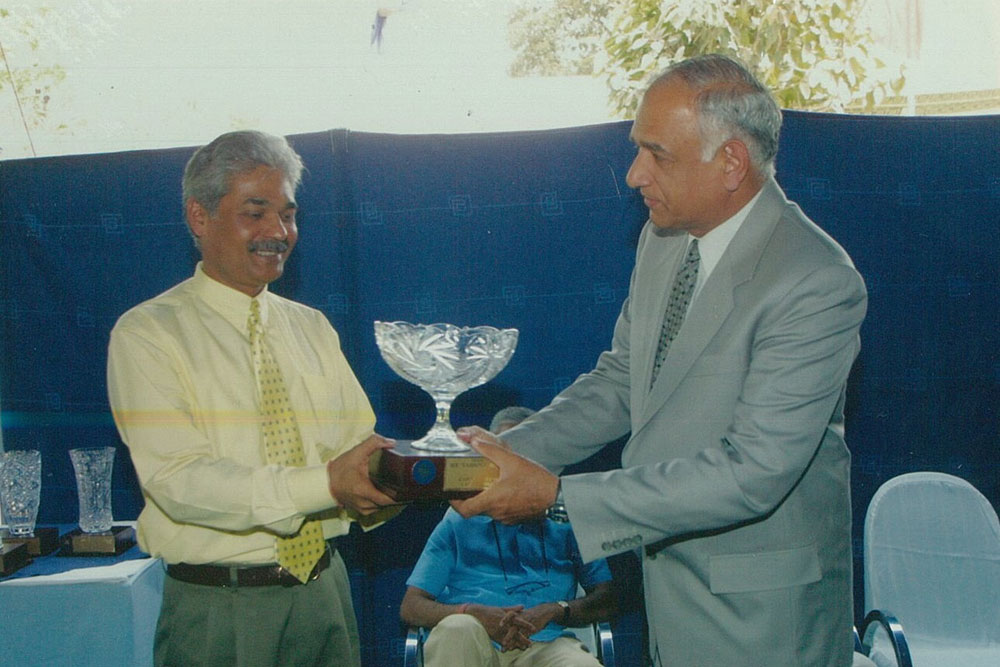 Based on Azad’s recce report on security, the Indian government, headed by Atal Bihari Vajpayee, cleared the tour that went on to become easily the most successful series ever played on either side of the Wagah Border – on and off the field. Incidentally, India’s first match day on March 11, 2004, coincided with a terrorist attack on a train in Madrid, Spain, that alerted the local security agencies – and Azad -- around the Indian team in Pakistan.

Besides visiting monuments and historical buildings, from Lahore to Peshawar, Azad was feted, felicitated, and honoured by the Pakistan police – moments that he still cherishes. One such occasion was when Tarik Saleem Dogar, DIG (Lahore), invited Azad over dinner and presented him a memento that he has kept safely. Azad also addressed young police officers of Pakistan – a rare honour for an Indian cop.

“I had some great experiences in Lahore. DIG (Lahore) Dogar inviting me was a unique experience for me because he made me visit the Lahore Police Lines, perhaps the oldest Police Lines. There, when I was signing the register he asked me to sit down. I said it was the Commandant’s chair. He said ‘you are the first foreign police officer whom we’ve asked to sit on the chair for signing’. It was a great honour. He presented me a lovely memento, which is in front of me right now,” says Azad, who served as an Information Commissioner with CIC on premature retiring from the police service.

At the dinner, the Lahore police greeted Azad thoughtfully, by playing a popular song from Bollywood icon Raj Kapoor’s 1951 film Awara. “The Lahore Police band played ‘awara hoon...’ song; that was the welcome they gave to me. I was also invited to address young Pakistan police officers. Professionally also, it was a very satisfying tour for me, meeting all the senior officers at various places. They behaved very professionally; they really looked after me well, and gave me all courtesies as I was there as Inspector General of VIP Security. I had tremendous interactions with them,” recalls Azad. 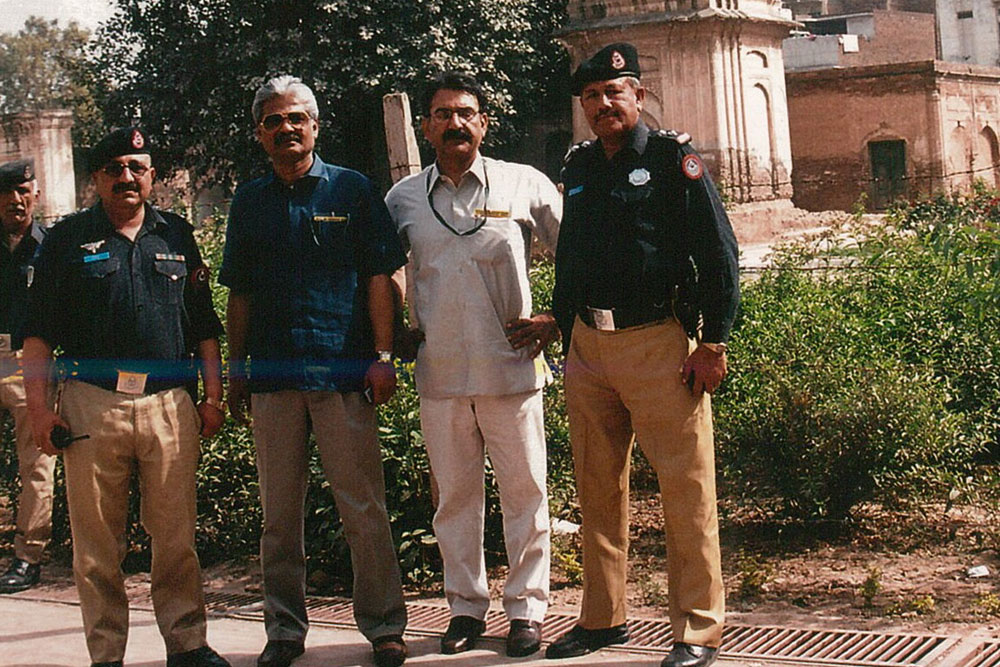 After playing a one-day match against Pakistan ‘A’ in Lahore on March 11, the India team flew into Karachi – the venue that was provided the tightest security – for the tour-opening first One-day International (ODI) on March 13. Karachi was also Azad’s biggest test, as there was a threat perception. “Karachi was a tough call. I was awake almost the whole night [on March 12, 2004], which was my birthday, for the match the next day. It was a threat input that one hadn’t seen, so I worked with one of the local DIGs, a very bright guy,” remembers the former top cop. Helicopters kept a close vigil throughout the day match, which was incident-free. “I remember when I was passing from one of the streets in Karachi, I asked the guy sitting in the front seat of the vehicle: ‘Is this the house of Dawood Ibrahim?’ He smiled and looked ahead,” he himself says with a smile.

Azad narrates another nugget from another visit to Karachi. “My experience in Karachi was fantastic. I went there as part of an advance security for [Lal Krishna] Advani ji. There we met the top brass of the Pakistan People’s Party; some people wearing kurta-pajama. When I said the dress was quite like ours, one of them said ‘we are also yours’. They were all from Bihar and Uttar Pradesh who had migrated there and knew about my father [former Bihar Chief Minister Bhagwat Jha Azad]. There was only one Hindu MLA and he had excellent relations with everyone. He gave us a feast at night,” says Azad.

The Indian team stayed for the shortest possible time in Karachi in 2004 – less than two days, due to the threat perception – and Peshawar, where the ODI was again turned into a day match to avoid night stay there. But people in Peshawar won the hearts of the Indian players and Azad. “In Peshawar, in the only five-star hotel where we [Indian squad] stayed, we ate terrific non-vegetarian dishes, sitting in front of burning coal, on the terrace. It was a tremendous sight. Even the experience of walking through the Peshawar streets – Raj Kapoor, Dilip Kumar and Shah Rukh Khan’s family once lived in the city – was memorable. I also visited the Gurudwara of Guru Ranji Singh ji there,” informs Azad. 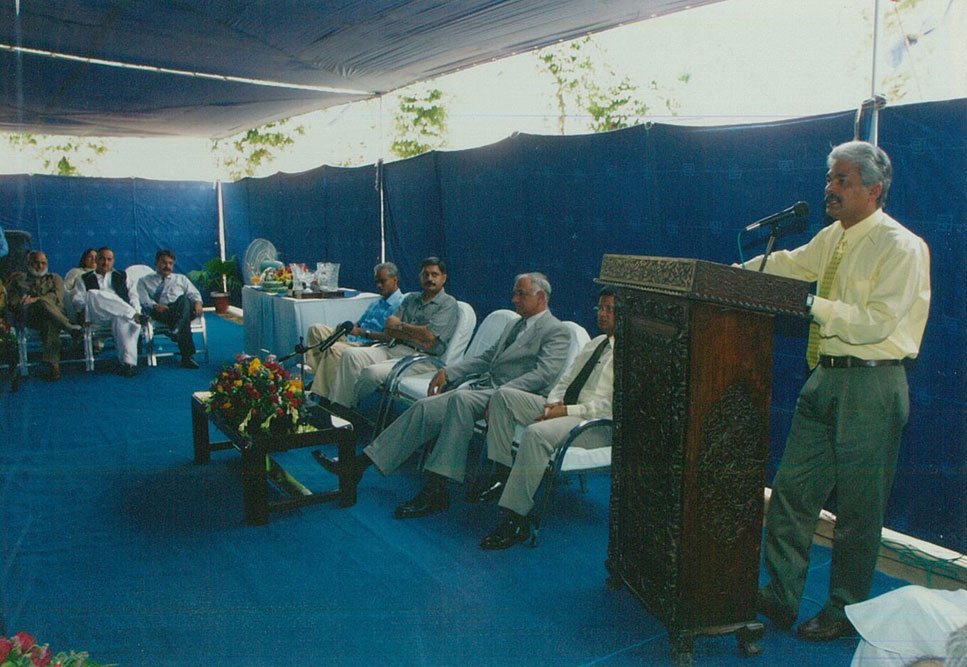 However, most of Azad’s most cherished memories are from Lahore, the home town of Wasim Akram. “Akram is a very good friend of mine, and he was so nice. He called me and his friends to dinner at his home in Lahore and we finished at 3 am,” he discloses.

Often, Rahul Dravid accompanied Azad to visit historical places or famous markets. “When I went to see the museum, the railway station, or styled building in Peshawar, Dravid would say ‘sir, I want to come with you’. We also went to the school where Advani ji had studied. He also took five minutes off there as he wanted to meditate for the next day’s game,” revealed Azad. “Dravid and I also visited the famous Anarkali Bazar in Lahore and people just rushed towards us; it was amazing. These were simple people who shared values and tradition with us. There was empathy.”

Lahore completely floored the Indian policeman. “People either didn’t accept money when the Indians went to the famous Food Street in Lahore to eat or reduce the bill drastically,” Azad says. He was also the security liaison officer of the Indian team when Wasim Akram’s Pakistani team visited India. “For the Mohali ODI, the Pakistani fans were given the visas for only two-three days, and they all congregated on the shops in nearby Chandigarh. They bought a variety of things. Many shopkeepers gave many things to them free of cost. Similar things happened later in Pakistan in 2004.”

Azad says when he went to Pakistan for the recce in 2004, he observed that the Pakistan Cricket Board (PCB), their cricket fans, and the Pakistani people in general were all excited for the series to begin. “I saw that they were very, very keen to host the matches. No doubt about that because for our very first meeting, everyone from Pakistan’s home secretary downwards was lined up. My first impression was that it was a positive thing, and sort of helpful and facilitating, because they desperately wanted these matches. It could be because the PCB was short of funds; India-Pakistan matches earn maximum revenue and viewership,” he remembers.

“Secondly, people were also starved of the Indo-Pak usual ‘high point’. Then, people-to-people contact was highly encouraging. I went to Lahore, Islamabad, Rawalpindi, Multan, Faisalabad, Karachi and Peshawar, and everywhere there was a sense of excitement, camaraderie, and they were very keen on trade engagement, keen on visiting India for films and songs etc.,” he narrates. “But, of course, now things are different after the Pulwama attack. I am sad that things are different, and it will be very, very difficult to get on the track again. That’s sad.”

For the Indian team, it was a highly successful tour on the field as well, as it won the three-Test series 2-1 and the five-ODI series 3-2.