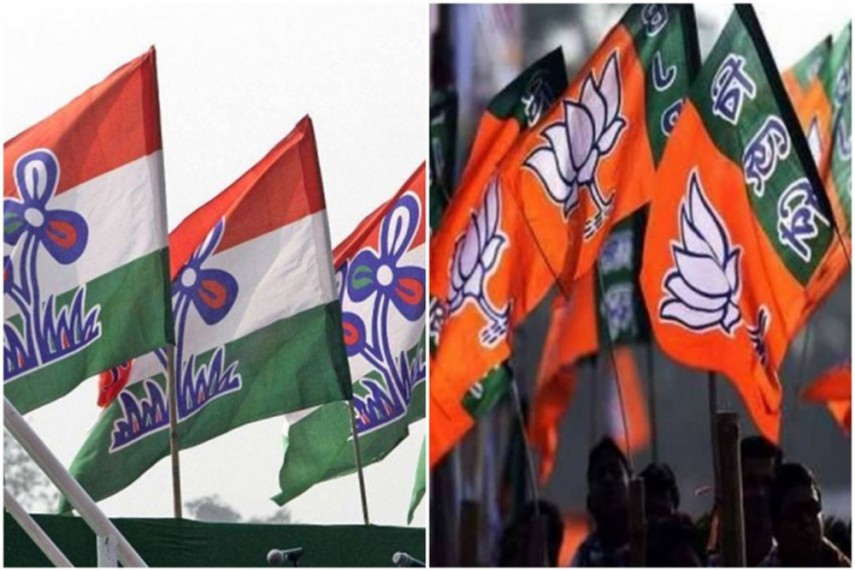 Both Ghosh and Das had earlier been with the TMC but joined the BJP after the 2019 Lok Sabha elections, mainly at the initiative of Mukul Roy, who was then one of the top leaders of the BJP Bengal leadership.

Roy, who got elected as an MLA from Krishnanagar Uttar seat on a BJP ticket, returned to the TMC soon after the assembly election results.

On Tuesday, Das joined the TMC in Kolkata in the presence of TMC secretary-general Partha Chatterjee and Lok Sabha MP Kakoli Ghosh Dastidar. With Das' return to the TMC, the BJP in Bengal has now lost three MLAs to the TMC in Bengal.

BJP ‘Sowing Seeds Of Hatred’ In Bengal With Its Bifurcation Stance: TMC

"A misunderstanding led me to leave the TMC in the first place. But now I have realised if I need to continue seving the people, I have to be with Mamata Banerjee. There is no scope for work in the BJP," Das said.
He also dubbed the BJP's cebtral leadership as bohiragoto, or outsiders. "Those who can't speak the local people's language cannot earn the local people's trust," Das said.
In the elections, the BJP had won 76 seats, and its alliance partner, All Jharkhand Students' Union (AJSU) won 1. Later, two MLAs resigned to retain their Lok Sabha berths. So, the BJP's tally in the state assembly at present stands at 71.
The TMC had won 213 seats.
BJP leaders hinted that they are going to write to the assembly Speaker seeking disqualification of Ghosh and Das. They have already entered a legal battle to disqualify Roy from the Assembly. Roy is at present serving as the chairman of the Public Accounts Committee, a post usually offered to opposition party MLAs. But the TMC, and Roy himself, argued that Roy is formally a BJP MLA.

Of the new ones to jump the ship, Ghosh hails from Bankura district, while Das is from North 24-Parganas.

Das' switching of camp may appear to be a bigger blow for the BJP because he is a leader of the Matua-Namasudra community and the constituency he represents is dominated by the Matua-Namasudras, a Dalit refugee community, members of which voted largely in favour of the BJP in the 2019 Lok Sabha and the 2021 assembly elections.

The TMC, however, has managed to regain some of the Matua votes in the assembly elections, even though the BJP won all the seven assembly seats where Matua votes determined the result.
"Das's switch over will make it difficult for the party to retain the Matua support base because a section of the Matuas are already upset with the Centre because the CAA has not been implemented yet," said a senior leader of Bengal BJP who did not want to be named.
The CAA, of the Citizenship Amendment Act, has been one of the main reasons the Matua votes swung from the TMC to the BJP in the 2019 Lok Sabha elections. Shantanu Thakur, one of the main leaders of the Matua community in West Bengal is a BJP MP and was recently given a minister of state berth during the cabinet reshuffle.