The students surrounded his car and shouted slogans, asking the governor to "go back". 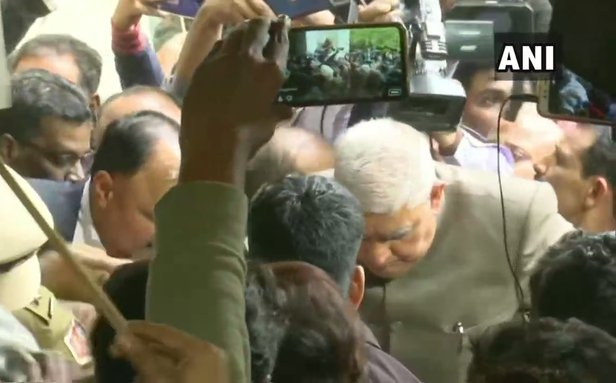 West Bengal Governor Jagdeep Dhankhar was on Monday shown black flags on Monday by a section of students at the Jadavpur University over  his stance on the Citizenship Amendment Act (CAA) and National Register of Citizens (NRC).

The students surrounded his car and raised slogans, asking the governor to "go back". He had gone there to attend a meeting as its chancellor.

Amid the fracas, Dhankhar was stuck for around 45 minutes after which he was escorted to the court meeting venue by security men.

The students also carried posters opposing the CAA and NRC.

Dhankar later held a dialogue with the students at the entrance of the administrative building Aurobindo Bhavan and said, "I have come to the university because I did not want any student to face problems. I knew there will be protests. But if we don't have dialogue, then the road will not go further from here."

On being asked about his stand on the CAA and NRC, Dhankar said he needed a complete representation of the students' argument and only after studying it, he could reply.

However, the students were not happy with his answers on the issue and the Governor continued to face 'Go Back' chants.

"The Governor as the Head of Institute of the University and many other colleges was expected to respond to the violence inflicted upon students of Jamia Millia Islamia, Aligarh Muslim University and others. But his response was inadequate," said Utsarjana Mutsuddi, former MPhil student and current Project Assistant at the Women Studies department.

Mutsuddi, who was present at the protest, said, "The protest was called when students got to know the governor was coming to the university for a meeting on the issue of the Executive Committee deciding he would not be invited to the convocation this year."

The varsity earlier cancelled the special convocation where Dhankhar was supposed to confer D.Litt and D.Sc to some eminent people. It was scheduled on December 24. But the JU authorities said it will instead hold a simple ceremony in which only students will be awarded degrees and certificates.

"The 2019 batch that will receive the convocation decided that they do not want to receive degrees from Dhankar given his involvement in the Babul Supriyo incident," she added.

"As Chancellor would be presiding the 10th Meeting of the 9th Court of the Jadavpur University scheduled to be held on Monday, the 23rd of December, 2019 at 200 pm in the Committee Room No. I of the University," Dhankhar had said in a tweet.

Earlier in September, Dhankar intervened to rescue Union Minister Babul Supriyo at the University when he faced a 'gherao' by students after coming to attend an event organised by the ABVP, the student wing of the RSS.  Supriyo had claimed he was heckled by the students.