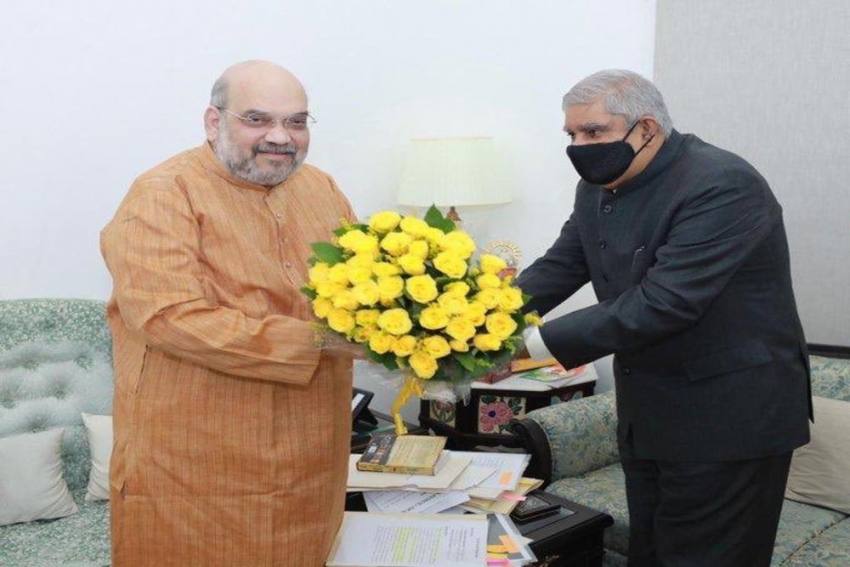 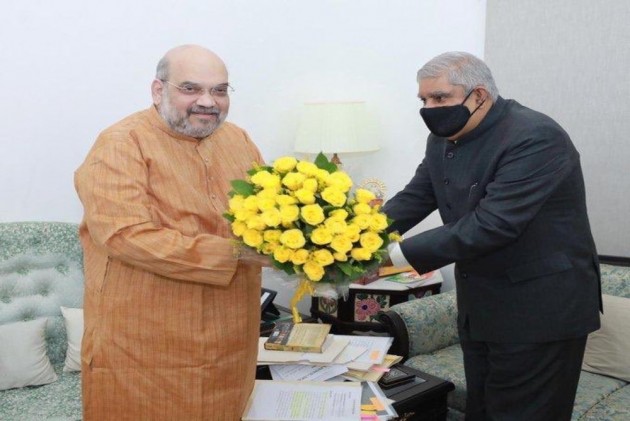 West Bengal Governor Jagdeep Dhankhar on Thursday met Union Home Minister Amit Shah and discussed with him the "state of affairs and affairs of state".

During the hour-long meeting, the governor apprised the home minister about various issues concerning the state.

Later while talking to reporters, he alleged that the police and bureaucracy were being politicised in West Bengal and they were working as "foot soldiers" of the state government.

Governor Dhankhar was with the Union Home Minster for over an hour and state of affairs and affairs of state in West Bengal were traversed.

The meeting bears significance as the governor is known for often expressing his disagreement on various matters in West Bengal, inviting sharp reactions from Chief Minister Mamata Banerjee and her government.

Last month, Banerjee and Dhankhar were at loggerheads over the latter summoning the state's Director General of Police and calling the state "home to illegal bomb-making" in the following note.

Dhankhar had also alleged in the note to the DGP that the police "overlooked rampant and open loot in PDS distribution, cyclone 'Amphan' relief funds, and criminal negligence by officials during the Covid-19 pandemic".

Addressing reporters after the meeting, Dhankar said that while he could not go into the specifics of the meeting, he discussed the "status of democratic institutions and issues of public interest" with the home minister.

"I have witnessed continual decline of democratic governance. Political violence, vendetta is a daily affair. Targeted killings being seen very often. As constitutional head I have witnessed it.

"The greatest challenge is that the police and bureaucracy are being politicised. They are working as foot soldiers of the state government. I have time and again appealed to them that what you are doing is beyond your Constitutional rights... It has become a police state," he said.

The governor asserted that government officers are accountable and they must remember it.

"No arm of law will spare anyone."

"I sent an input to the DGP apprehending threat perception for an association with an MP. But after the Manish Shukla was murdered. The chief minister took a stand on behalf of the DGP after it through a letter. How can a constitutional head have a sound sleep sound when violence, vendetta is taking place," he posed.

Manish Shukla, who was a close aide of Barrackpore's BJP MP Arjun Singh, was shot dead in front of the party's office in North 24 Pargana's Titagarh on October 4.

The state Criminal Investigation Department (CID) has so far arrested three persons in connection with the killing.

Dhankar further said, "I am committed to ensure a free, fair, fearless atmosphere... My concern is not who is being elected but my concern is how the election is taking place," he said.