The incident occurred late on Saturday night outside Bhopal railway station when a speeding car rammed into a procession of people who were part of a Durga Puja idol immersion procession. 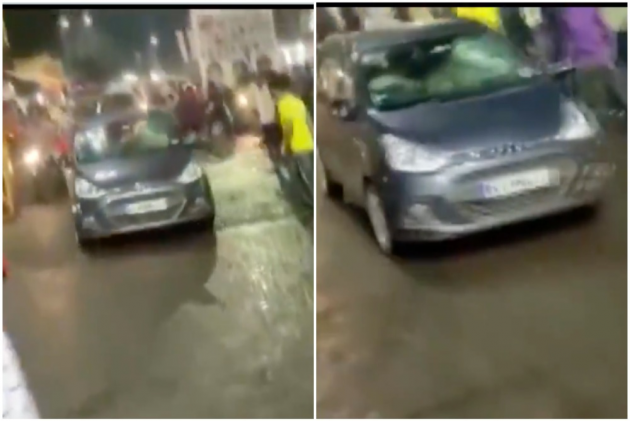 The festive season in Bhopal turned into a catastrophe for some after a speeding car rammed into a group of people who were part of a Durga idol immersion procession in Madhya Pradesh. The incident left four persons, including a head constable, injured.  The incident occurred late on Saturday night outside the Bhopal railway station when the car, which was in reverse gear, rammed into a procession of people which was moving forward.

One of the four persons hit by the vehicle sustained severe injuries and is currently undergoing treatment at a hospital,  Bajaria police station in-charge Umesh Yadav said.

A case has been registered with Bajaria police station regarding the incident. The driver of the car has since been arrested and the police have also seized the car in question.

The on-duty police head constable, who was also one of the persons hit by the car, sustained minor injuries to his leg. Yadav said after the car rammed into the procession people started shouting to get hold of the car driver, who panicked and fled by reversing the car speedily.

The incident occurred even as the incident in Uttar Pradesh's Lakhimpur Kheri which killed eight people after a car rammed into a group of protesting farmers caused outrage.

Meanwhile, a video of the incident has gone viral on social media. The clip shows a car is being reversed speedily while the people are seen trying to save themselves by moving away from the path of the vehicle.

One of the injured persons, Chaturanan Sahu (26), said a grey car crashed into the procession of the Chandbarh Durga Utsav when it reached near Gupta tea stall outside the Bhopal railway station. Two persons were inside the car when the incident took place.