Watch: Five Lions Drag Buffalo To Eat. What Happens Next Could Shock You

Five lions had just brought a buffalo down to the ground. It wasn't dead yet. Within seconds, two of the lions launched an attack on the third, which many on Twitter pointed out belonged to some other pride, the reason why it was targetted. 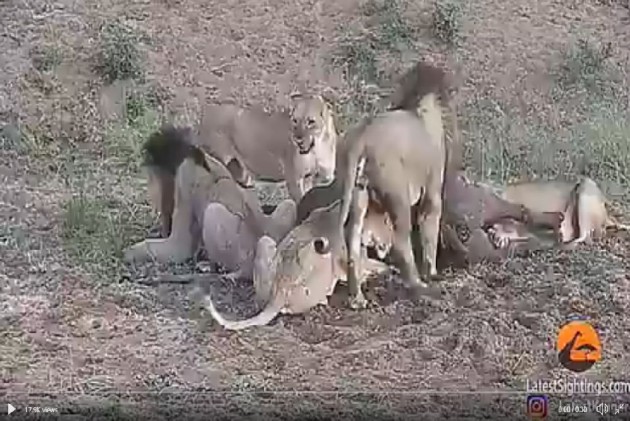 A video shared by Parveen Kaswan of the Indian Forest Services on Twitter shows a group of lions in South Africa's Kruger National Park preparing to feed on a buffalo.

The group comprised five lions and had just brought a buffalo down to the ground. It wasn't dead yet. Within seconds, two of the lions launched an attack on the third, which some on Twitter pointed out belonged to some other pride, the reason why it was targetted.

These #lions have a lesson to teach. They were having their meal but decided to fight with each other. And food walked away. Credits in video. pic.twitter.com/e7PUaZYWnP

The remaining two lions, too, got involved in the fight. And the buffalo, dragged by the group, pounced on the opportunity, took a while to come back to its feet, and ran away immediately.

Not just Kaswan, many others on Twitter also saw a lesson in the video. Here are some of the responses:

That lioness was from other pride.I saw this on Nat Geo.

Lucky Buffalo Get another day of life.

Maybe the lesson is not to mess with nature. And take your ‘pride’ seriously. An intruder can never belong.