Akhilesh claimed that Adityanath is trying to divert people’s attention with his 'jihad' frenzy. 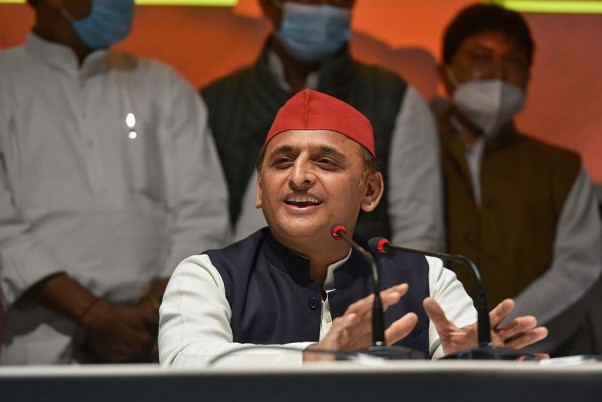 Samajwadi Party chief Akhilesh Yadav on Wednesday lashed out at the Uttar Pradesh government, alleging that people are facing hardships due to poor law and order and dwindling economy but its focus has been only on “jihad” and “Ram Naam Satya”.

The apparent reference was to the draft ordinance cleared by the BJP government on Tuesday to curb forcible or “dishonest” religious conversions including those for the sake of marriage, which could land violators in jail for up to 10 years.

Chief Minister Yogi Adityanath in a rally ahead of the assembly bypolls had said those who “play with the honour and dignity of sisters and daughters by hiding their real names and identities… If they do not mend their ways, their ‘Ram Naam Satya’ journey will start”.

The CM said this in reference to “love jihad”, a term used by BJP leaders to describe alleged conversion of Hindu women to Islam in the guise of marriage.

Akhilesh Yadav on Wednesday said as the BJP government in the state is about to complete four years in office, problems of people are increasing.

People are facing hardships due to poor economy, corruption, price rise and bad law and order but the government has only “jihad” and “Ram Naam Satya” as solutions to offer.

Whether a farmer dies due to the burden of debt, a girl ends her life to save honour or a youth commits suicide because of unemployment, these all do not matter to the chief minister, Akhilesh alleged.

His only solution for the problems is “Ram Naam Satya, he said.

How a government which all the time chants this can think good of anyone, Akhilesh added.

He claimed that Adityanath is trying to divert people’s attention with his “jihad” frenzy.

“To divide society by spreading hatred is an old tactic of the RSS. Everyday, a new law is framed by the government to hide its failure. No law is strict or soft but how it is implemented makes it effective or ineffective," he said.

Open Letter: Did Outlook Give Owaisi A Free Pass?