Many passengers have alleged that Indian Railways has resorted to profiteering when thousands of people are helplessly looking for a way to reach their destination. 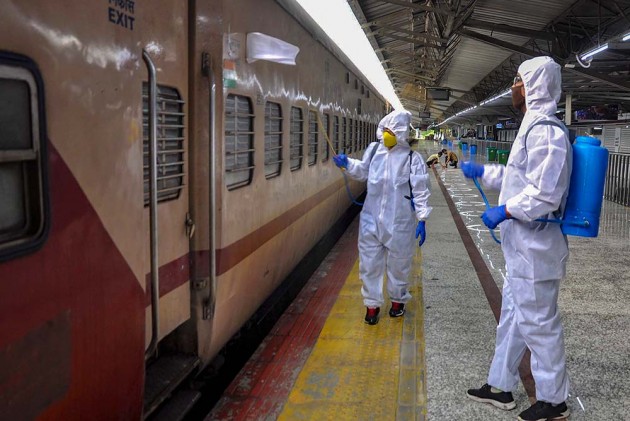 Nikhat Parveen, a resident of Aligarh, who has been stuck in Dibrugarh since March 30 has alleged that the Indian Railway has increased the train fare by 40% in just six days.

She has presented the screenshot of the IRCTC app which shows that on May 14, the ticket price for AC II is Rs 3650. While on May 20, the same ticket costs Rs 5070. 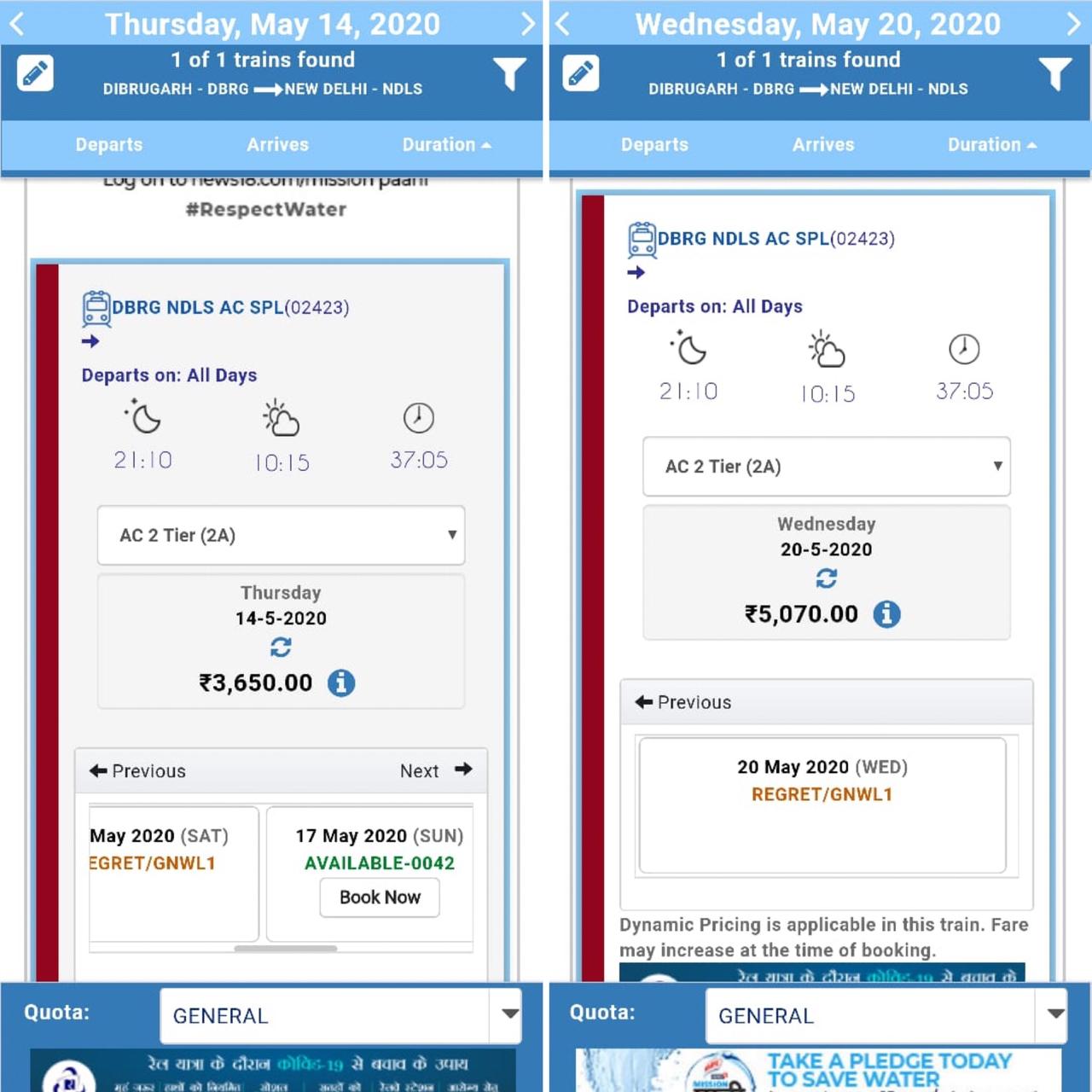 She flew to Dibrugarh from Delhi on March 12 with her two daughters aged 9 and 3 and she was supposed to fly back on March 30 by an Air India flight but she got stranded due to the lockdown.

Parveen said that she noticed the changes in fare when she was she was trying to book a ticket for AC-I as she has to return urgently on medical ground.

She added, “I know the amount will revert into account but booking a ticket through the website is really tough.”

To verify the allegation, Outlook checked the train fare from New Delhi to Patna for AC-III in train number 02424 (New Delhi to Dibrugarh). 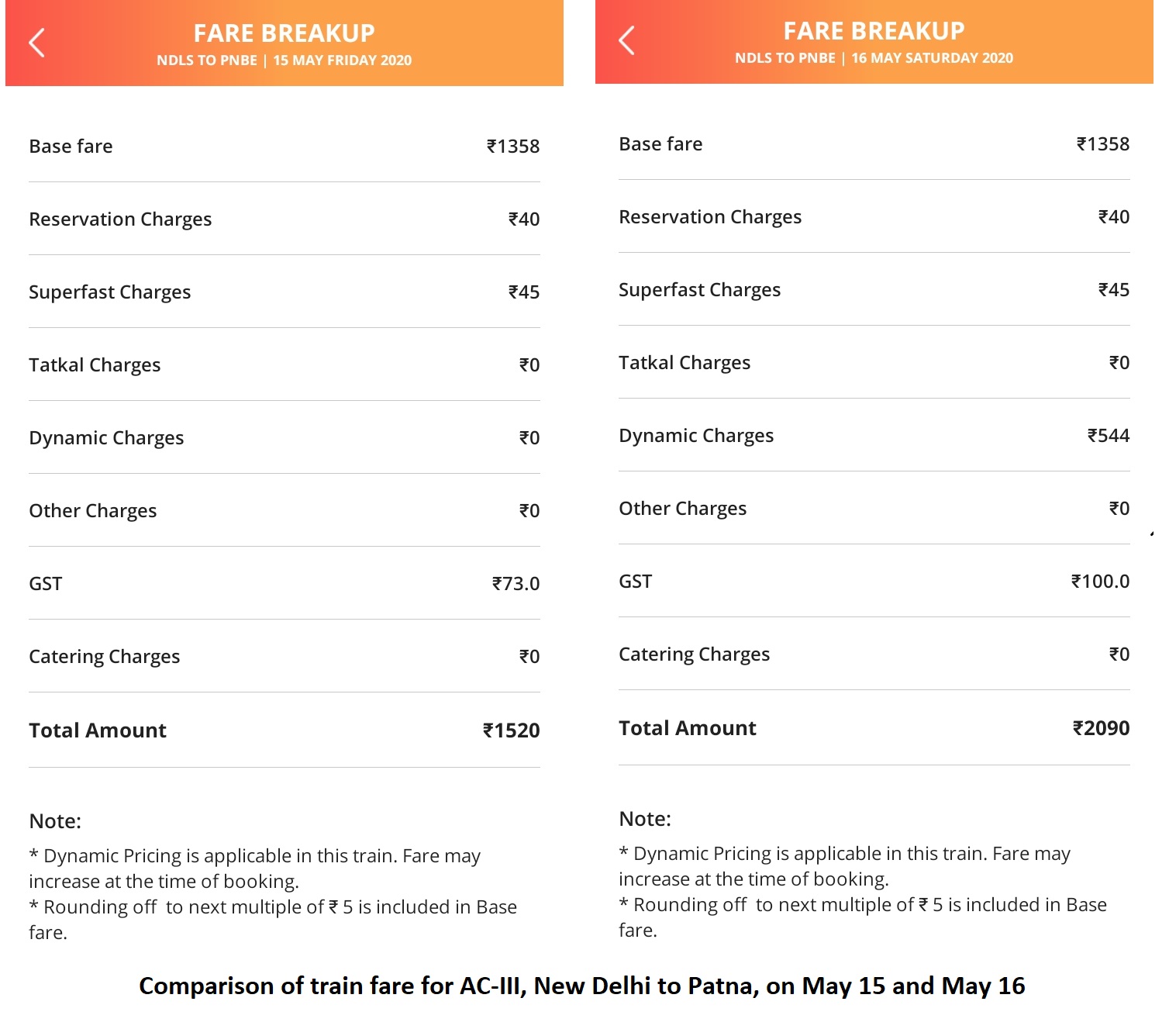 The ticket break up of March 16 shows an additional cost of Rs 544 under the sub-head ‘Dynamic Charges’. This increases the ticket price by 35% just in a single day.

A railway press release in August 2015, while announcing the implementation of dynamic fare system, said, “The aim and objective of introducing trains with dynamic fares are to provide rail-users the facility of travelling at short notice by paying higher fares during specific periods when there is a heavy rush.”

Many senior railway officials have supported the continuation of dynamic pricing as they say that it has been in practice since 2015 and people never made any hue and cry.

“The government is already bearing the cost of the transportation of migrant labourers. What is the problem if those who can afford to pay are asked to pay?” A railway official says.

Parveen and many other passengers Outlook spoke to have alleged that Indian Railways has resorted to profiteering when thousands of people are helplessly looking for a way to reach their destination.

They say that dynamic pricing will not make up the loss that the railway is trying to recover from the passengers by running these special trains.

“It will send a wrong signal among people that the government, which is announcing an economic package of 20 lakh crore, is recovering money by introducing dynamic pricing scheme at this critical time,” a senior railway official said requesting anonymity.