On Monday, the police filed FIRs against three people for concealing their travel history. They have also been using drones to keep an eye on the movement of the people. 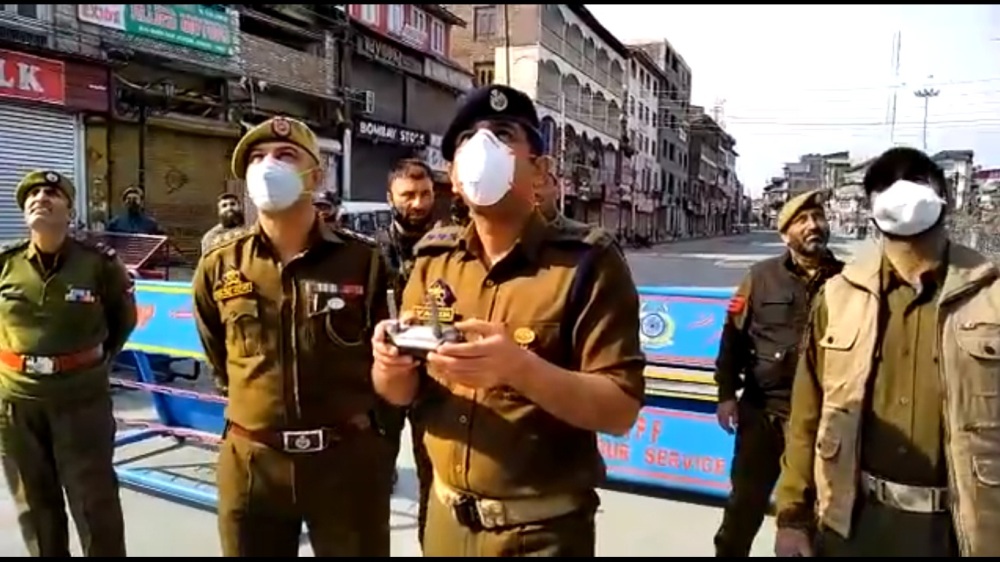 Jammu and Kashmir police using drone to keep an eye on the movement of people as the entire country goes into a lockdown to prevent the spread of the novel coronavirus.
Naseer Ganai March 24, 2020 00:00 IST To Contain Coronavirus, J&K Police File FIR, Seize Vehicles And Use Drones To Monitor Movement Of People

The Jammu and Kashmir Police have taken some strict measures to ensure people stayed indoors during what has now become a nationwide lockdown necessitated by the fear of the spread of novel Coronavirus.

On Monday, the police filed FIRs against three people for concealing their travel history. They have also been using drones to keep an eye on the movement of the people.

JKP using UAV (Drone) for appealing #people not to come out in #Srinagar City. @JmuKmrPolice pic.twitter.com/JNzpGpaNof

Police said two youth from Awantipora in Pulwama area of South Kashmir were booked under various section of the IPC for not revealing their travel history. The FIR had been filed under section 270 IPC (likely to spread infection of dangerous disease to life), section 271 IPC (knowingly disobeying any quarantine rule).

The police said a student had arrived in Kashmir from Bangladesh while the other had travelled from Pakistan; both concealed their travel history.

The girl, following her return from Pakistan, tried to circumvent the screening and surveillance teams before she went into hiding, officials said, adding the girl was traced and screened. “She had no symptoms of the coronavirus but has been sent to a quarantine facility for 14 days,” said an official.

Another student, a youth from Central Kashmir’s Ganderbal district, was also booked by the district police for concealing the travel history. The officials said locals are cooperating with police to help trace people, who hide their travel histories.

“There are some people who are not revealing their travel histories. But we get WhatsApp messages and phone calls and that's how we catch hold of them and have quarantined many,” says an official.

About drones, the police said they are being used to check if there is any violation of restriction orders so that necessary action is taken.

In a video, shared from the official account of Jammu and Kashmir (@Kashmir Zone Police), police personnel can be seen spreading the message via a drone asking people to stay indoors and not come out unless it's necessary.

In Jammu and Kashmir, there are 4 confirmed coronavirus cases and around 4,000 people are under observation.

Divisional Commissioner Kashmir Pandurang K Pole Monday appealed the people to follow shutdown in letter and spirit across the Valley till March 31. While addressing media, he said the government ordered the closure of all establishments and services throughout Kashmir till March 31 in a bid to prevent the spread of coronavirus in the Valley.