This unusual venue was chosen after the bridegroom R. Prashanth from Cumbum town in Tamila Nadu's Theni district could not get an e-pass to travel to Vanidperiyar Valaradi in Idukki district of Kerala, where the wedding was scheduled to take place at a temple. 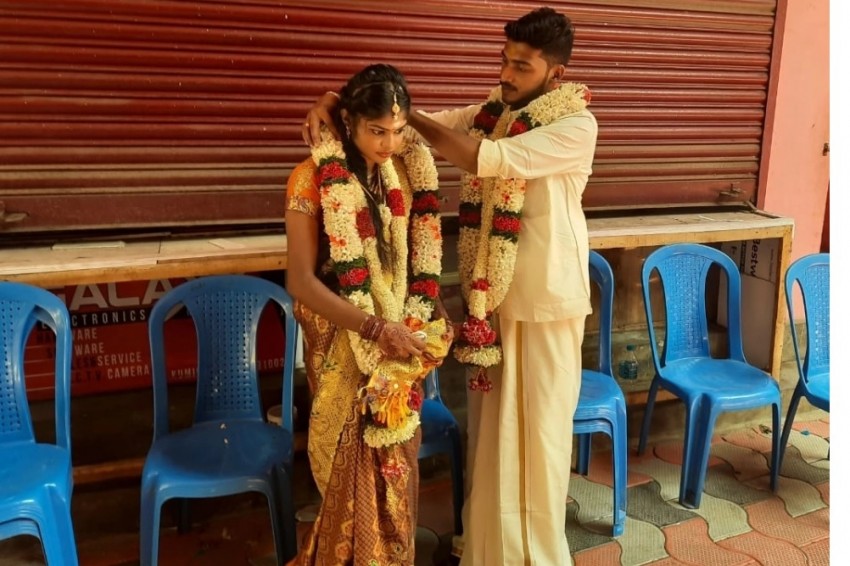 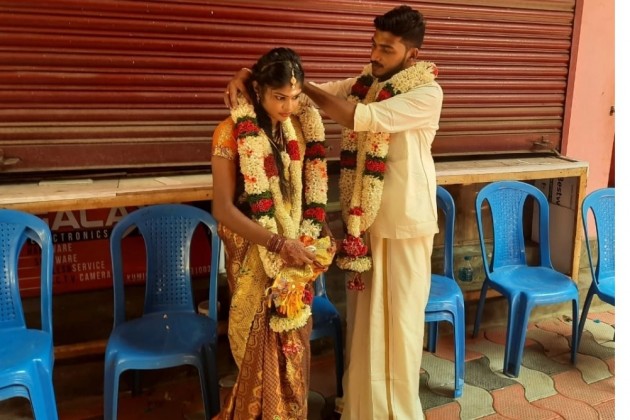 Even a border check post is a good enough venue for a wedding in these corona times, especially when the groom and bride hail from two neighbouring states.

This unusual venue was chosen after the bridegroom R. Prashanth, from Cumbum town in Tamil Nadu's Theni district, could not get an e-pass to travel to Vanidperiyar Valaradi in Idukki district of Kerala, where the wedding was scheduled to take place at a temple on Monday morning.

Despite not having a travel pass, the bridegroom and his parents, dressed in traditional wedding attire, took a chance, taking a cab to Kerala. They were, however, stopped at the Kumili border check post between the two states. The Kerala police refused to allow the groom and his family to proceed.

So the groom called up the bride to explain the situation. Bride Gayathri, who lives in Kottayam district, had already reached the wedding venue. Hoping to convince the Kerala police Gayathri, all decked up for the occasion, came with her parents and a couple of close relatives to the Kumili check post and pleaded that only the groom and his parents be permitted. But the Kerala police stood their ground despite pleas that the auspicious time was fast approaching.

It was then Kumili police inspector Jayapraksh who suggested the two sides have the wedding ceremony near the check post. When they agreed he permitted the bride’s family to cross over to the Tamil Nadu side. With the closed shutter of a shop providing the background the two exchanged garlands and the groom tied the "thaali" (mangalsutra) at the auspicious time.

Policemen, revenue and health officials of the two states blessed the couple after which the bride crossed over into Kerala and returned to the original venue, along with her parents for the traditional lunch. Prashanth and his parents drove back home happy that there was no need to postpone the wedding. “I hope they would issue me a pass at least for the first night,” Prashanth had quipped wryly before waving goodbye to his wife.

How COVID-19 Has Affected US University Campuses, And What The Fall Semester Looks Like