The EC on Monday banned West Bengal Chief Minister Mamata Banerjee from campaigning for the Assembly polls for 24 hours after it found a couple of her statements as objectionable. 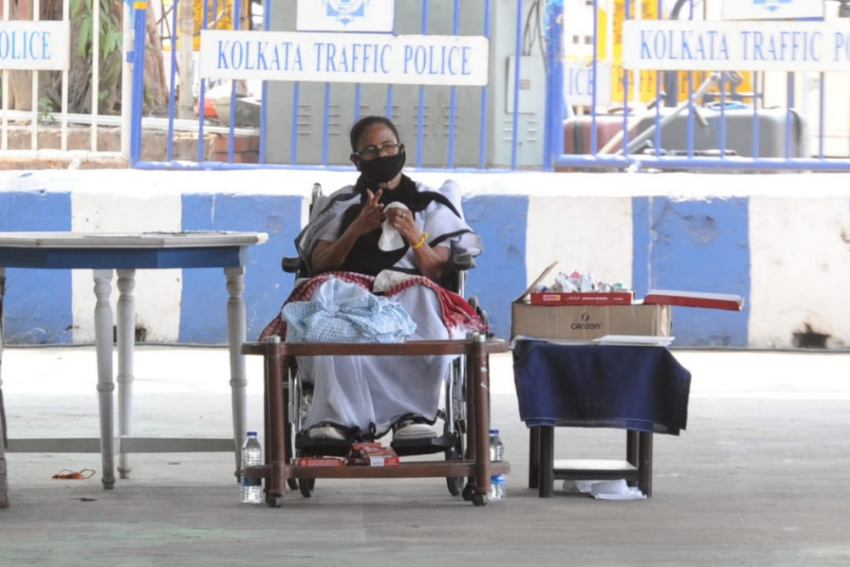 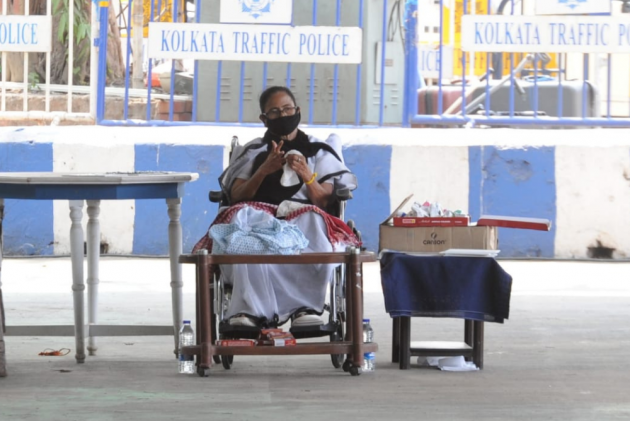 In the backdrop of the Election Commission banning West Bengal Chief minister Mamata Banerjee from campaigning for the Assembly polls for 24 hours, the TMC chief on Tuesday staged a demonstration to protest the poll body’s “unconstitutional” decision.

The EC banned Banerjee from campaigning on Monday at 8 pm.

The ban came after the poll body found her statement accusing the central forces of carrying out a genocide, violative of its moral code of conduct.

Banerjee, still confined to a wheelchair owing to the injuries she sustained last month, arrived at Mayo road in Kolkata at around 11.40 am and began her sit-in protest next to a Mahatma Gandhi statue.

No TMC leaders or supporters were spotted nearby.

A senior TMC leader, when approached, said, "No party leaders are allowed near the site of the protest. She is sitting there alone."

The poll panel also objected to her statement urging Muslims to vote en block for the TMC.

Banerjee, lashing out at the poll panel, had said on Twitter that she would hold a protest against the poll panel's "unconstitutional and undemocratic" decision.

The TMC boss is scheduled to address two rallies after 8 pm on Tuesday -- one at Barasat and the other at Bidhanangar.

Meanwhile, a defence official here said that the area where Banerjee is staging a protest belongs to the army, and the TMC was yet to receive permission for the programme.

"Just to keep everyone informed, we have received an application from the TMC for a no-objection certificate at 9:40 am today. It is still under process," the defence spokesperson said.

Earlier today, Shiv Sena MP Sanjay Raut alleged that the Election Commission's decision was taken at the behest of the BJP.

The Sena's chief spokesperson expressed solidarity with Banerjee and called her the “Bengal Tigress”.

All You Need To Know About Sputnik V Covid Vaccine: Price, Efficacy And When It Will Be Available In India