The march comes as Deputy National Security Adviser and interlocutor R.N. Ravi is scheduled to hold a meeting with non-governmental organisations (NGOs) in Nagaland on February 26, to update them on the progress of the peace process with Naga extremist groups. 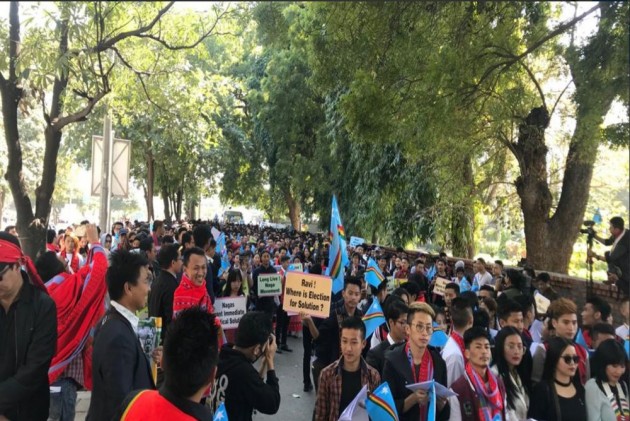 Thousands of Nagas held a rally in New Delhi's Jantar Mantar area on Saturday to demand a solution to the Naga crisis.

The march was held under the aegis of Global Naga Rally.

Thousands of Nagas walk in Delhi to rally for Naga solution.#Globalnagamassrally#NagaSelfDetermination pic.twitter.com/h7UTDCASnS

The march comes as Deputy National Security Adviser and interlocutor R.N. Ravi is scheduled to hold a meeting with non-governmental organisations (NGOs) in Nagaland on February 26, to update them on the progress of the peace process with Naga extremist groups.

Hopes for a solution to the “Indo-Naga political issue”, under discussion since 1997, before the Lok Sabha election, has dimmed in Nagaland, with the Congress criticising the BJP for eyeing a settlement after the elections.

“We have no expectation from Mr. Ravi’s visit, which is meaningless,” said Chuba Ozukum, president, Naga Hoho, the apex organisation of Naga tribes, the Hindu reported.

The Naga peace accord has been hanging fire since a framework agreement was signed with the National Socialist Council of Nagaland (Isak-Muivah) [NSCN-IM] in 2015.

After signing an agreement with the NSCN-IM, the largest group representing the Nagas, the Centre signed a preamble in November 2017 with six Naga National Political Groups (NNPGs) to hold further discussions to find a solution to the long-standing Naga issue.

On behalf of the Centre, RN Ravi had signed the ‘framework agreement’ at the residence of Prime Minister Narendra Modi on August 3, 2015 at a much publicised ceremony.