Third Covid Wave In India Unlikely To be As Severe As Second One: Study

According to the study, if 40 percent of the population is fully vaccinated within three months of the second wave peak, then the severity of the third wave will be less 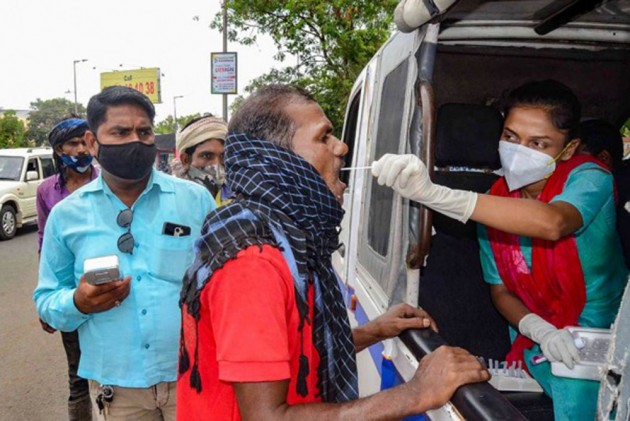 Amid concerns of a possible rise in the number of coronavirus infections in the country, a study published in the Indian Journal of Medical Research (IJMR) has stated that if India does experience the third wave of the virus anytime soon, it will most likely not be as severe as the second wave.

The study, which was based on mathematical modelling analysis, states that in a scenario where 40 percent of the population is fully vaccinated within three months of the second wave peak, then the chances of the spread of the infection reduce significantly which might cause the overall severity of the third wave to be lesser than that of the second wave.

This development comes in the backdrop of India logging 48,698 new coronavirus infections and 1,183 new fatalities during the last 24 hours. With the latest addition, India’s total Covid caseload rose to 3,01,83,143 while the death toll surged to 3,94,493.

According to the Union health ministry data updated at 8 am today, India’s weekly Covid positivity rate declined to 2.97 per cent, while the number of active cases has further declined to 5,95,565 and now accounts for 1.97 per cent of the total infections.

Amid these developments, a study titled, “Plausibility of a third wave of COVID-19 in India: A mathematical modelling based analysis" was recently published in IJMR. It has been authored by Sandip Mandal, Balram Bhargava and Samiran Panda from the Indian Council of Medical Research (ICMR), and Nimalan Arinaminpathy from the Department of Infectious Disease Epidemiology, MRC Centre for Global Infectious Disease Analysis, School of Public Health, Imperial College London, London, UK.

Considering the four hypotheses for the emergence of a third wave, the study said, infection-induced immunity may decay over time, permitting re-infection of those previously exposed, even if the circulating virus remains unchanged.

Previous works have shown how partially waning immunity could cause future waves of SARS-CoV-2 to be more benign, but the focus here was on the possibility of a third wave that may cause substantial public health burden, the study noted.

Therefore, a scenario where waning immunity results in a full loss of protection, rendering immune individuals susceptible again was considered, and a range of scenarios for the rate of waning were examined, it added.

Considering the hypothesis of an emergence of a full immune escape variant, the study said even if immunity remains lifelong, it is theoretically possible for a new variant to emerge that is capable of escaping the immunity induced by the previously circulating strains.

This was modelled in a simple way, by assuming that this new variant still has R0 = 2.2, so being equally infectious as the second-wave virus, but (as an illustrative example) is capable of re-infecting 50 percent of all those previously exposed to SARS-CoV-2, the study said.

Considering the emergence of a still-more transmissible variant, in the same manner as the second wave being driven by a virus with R0=2.2, the subsequent emergence of a novel virus with still-higher R0, but to which previously-exposed individuals would remain immune was modeled, it said.

We examined how high R0 would need to be, for this new variant to generate a substantial third wave, the researchers said in the study.

And as for lockdowns, the potential for the lifting of such restrictions to allow a third wave was modeled, they added.

The findings highlighted that immune-mediated mechanisms (waning immunity, or viral evolution for immune escape) are unlikely to drive a severe third wave if acting on their own, unless such mechanisms lead to a complete loss of protection among those previously exposed, the study said.

Likewise, a new, more transmissible variant would have to exceed a high threshold (R0 >4.5) to cause a third wave on its own. However, plausible mechanisms for a third wave include a new variant that is more transmissible and at the same time capable of escaping prior immunity, and lockdowns that are highly effective in limiting transmission and subsequently released, it noted.

"In both cases, any third wave seems unlikely to be as severe as the second wave. Rapid scale-up of vaccination efforts could play an important role in mitigating these and future waves of the disease," the study stated.

"This study demonstrates plausible mechanisms by which a substantial third wave could occur, while also illustrating that it is unlikely for any such resurgence to be as large as the second wave. Model projections are, however, subject to several uncertainties, and it remains important to scale up vaccination coverage to mitigate against any eventuality,” it said.

“Preparedness planning for any potential future wave will benefit by drawing upon the projected numbers based on the present modelling exercise," the study further said.