'Suspect All, Test All': Jammu And Kashmir Speeds Up Covid-19 Testing To Contain Virus

An effective contact tracing and subsequent testing has led to containing the virus within specific pockets of Jammu and Kashmir, doctors said. 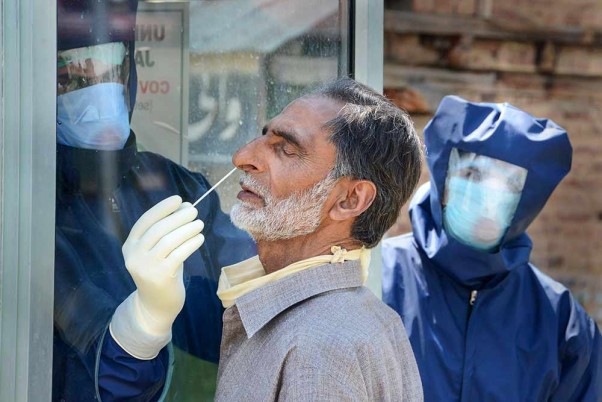 A medic collects samples from a man for COVID-19 tests at a 'red zone', during a nationwide lockdown to curb the spread of coronavirus, in Srinagar.
PTI Photo
Naseer Ganai 2020-05-15T15:20:58+05:30 'Suspect All, Test All': Jammu And Kashmir Speeds Up Covid-19 Testing To Contain Virus

The Jammu and Kashmir administration has increased the number of daily Covid-19 tests over the past few weeks to have a better idea about the spread of the virus in the region.

The administration said that the testing capacity on the daily basis has crossed 4000-mark, resulting in detection of more Coronavirus cases that spiked to 983 till Thursday.

An effective contact tracing and subsequent testing has led to containing the virus within specific pockets of Jammu and Kashmir, they said.

“You may see the highest number of Coronavirus cases between 50-145 in eight out of 20 districts of J&K but the silver lining is we have been able to contain it in small clusters in these districts. It is not widespread there,” said chest disease physician Dr Naveed Nazir Shah.

The administration, which conducted less than 1000 tests on daily basis until late April, conducted 4133 tests on Thursday only. On Monday, when J&K reported 55 new Coronavirus cases, highest single-day caseload, at least 4254 tests were conducted.

Until Thursday, Jammu and Kashmir had tested 63515 samples and found 62532 of them negative and 983 positive.

Dr. Naveed, Professor and Head of Department Chest Medicine, Government Medical College Srinagar, said Coronavirus infection was under control in Jammu and Kashmir but people need to be cautious as majority of the cases were asymptomatic.

“All the patients detected till now had some sort of direct or indirect contact with old patients. The positive thing about Kashmir is that most of the patients, more than the national and international statistics, are asymptomatic or having mild symptoms. This is a good sign but can be dangerous in a sense that these patients can continue to spread the infection. That is why precautions need to be taken by one and all. Health and administrative advisories need to be obeyed in true sense,” Dr. Naveed said.

Dr Naveed cautioned the patients, who have recovered and tested negative for Coronavirus, not to be complacent of developing immunity against the virus.

“Till date, whosoever we have discharged is fully asymptomatic. They have completed home quarantine. Under follow up, we retested them and all of them tested negative. They develop antibodies against the virus. The chances of them being re-infected are less. But they should not assume they have immunity passport. They should continue to take precautions as others and obey advisories,” he said.

Till May 14, out of 983 positive cases, 487 are active and 485 have recovered and discharged from the hospitals. In Jammu and Kashmir eleven people have died due to the virus.

“We are having an RT PCR machine in the BSL-3 laboratory at the Chest Disease Hospital where we receive samples from all associated hospitals and other designated districts of the state. The samples are processed and reported at the earliest possible time and mailed to respective nodal officers,” Dr Naveed said.

Dr Naveed said that an average 700 samples are tested every day at Chest Disease Hospital, Srinagar and with another high-end machine ordered the testing capacity would go up by 1500 per day.

“Rigorous testing enables us to detect and isolate the Coronavirus cases early which helps us to reduce its transmission and break the chain. Otherwise the number of cases will rise exponentially,” he said.

He said Jammu and Kashmir is among the regions conducting highest tests per million population.

“Contact tracing is robust. First degree and  second degree contacts are traced. Then the whole locality is declared a red zone and random sampling in the area is done,” he adds.

He says as Kashmir is a closely-knit society and they receive inputs from neighbours and relatives about the contacts of a declared case. “All along, the confidentiality of those is maintained,” Dr Naveed said.

“You have to suspect one and all and test all if possible,” he said.