Sachin Pilot, who used to sit next to Ashok Gehlot, is now seated across the floor, near the opposition benches. 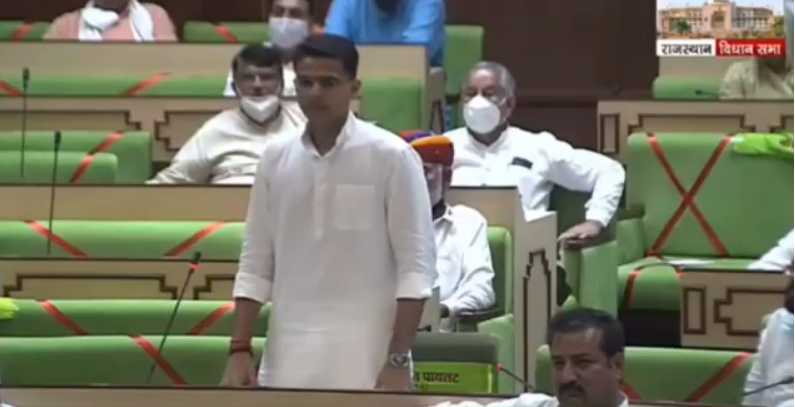 Hitting out at the Opposition over its criticism of the recent political developments in Rajasthan, former deputy chief minister Sachin Pilot on Friday described himself as the strongest warrior of the Congress and said he would protect his party at all costs.

Pilot, who has returned to the Congress fold after a month-long rebellion against Chief Minister Ashok Gehlot, made the remarks during the debate on a motion of confidence moved by the ruling party in the Rajasthan Assembly.

During the debate, Deputy Leader of the Opposition Rajendra Rathore mentioned Pilot's name in various matters, including the recent political developments in the state and a Special Operations Group (SOG) notice issued to him.

The notice was sent to Pilot after the Rajasthan Police claimed to have stumbled upon a plot to topple the Congress government.

"They are taking my name repeatedly. Prior to my seat being changed, I was safe and part of the government. Then I thought why our Speaker and chief whip have given me a seat here? I thought for two minutes and then saw that this is a border.

"On one side is the ruling party and on the other is the Opposition. Who is sent to the border? The strongest warrior is sent," Pilot said, interrupting Rathore.

"Many things have been said during the discussion on trust vote and many more will be said. Over time, everything will be revealed," Pilot said.

"But I want to say that whatever I or my companions had to say, we have told the doctor about our complaints... After getting the treatment, all of us today... 125 people are standing in the House," he said.

From his new seat, he added, he will ensure the safety of his party.

In a House of 200, the Congress has 107 MLAs and the support of Independents and allies. The BJP has 72 members.