The apex court also asked authorities to consider withdrawal of complaints against migrant workers for alleged violation of lockdown norms. 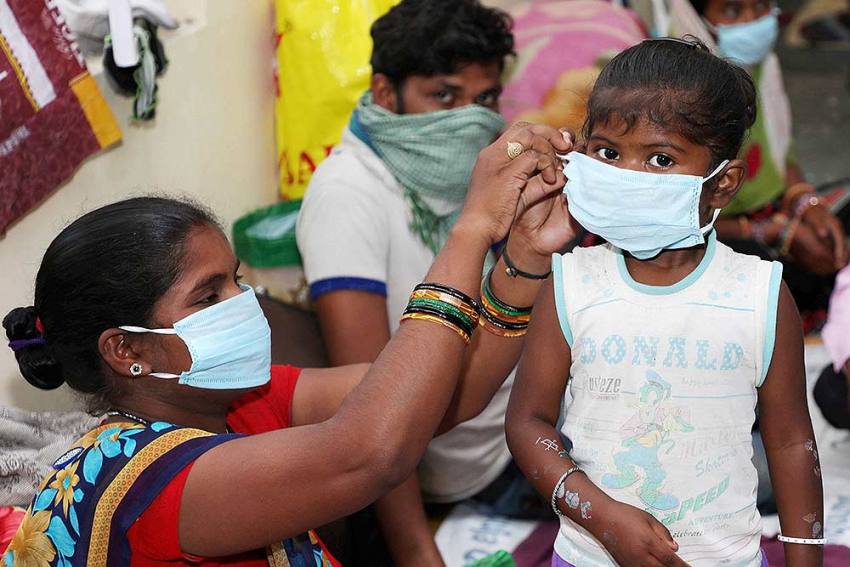 A migrant woman wraps a face mask on her child's face amid concerns over coronavirus pandemic, as they take refuge in a community hall provided by the government while waiting for a way to reach their native place, at Bhagwati Nagar in Jammu.
PTI Photo
PTI June 09, 2020 00:00 IST Send Migrant Workers Home Within 15 Days, Provide Them Work: SC To Centre, States 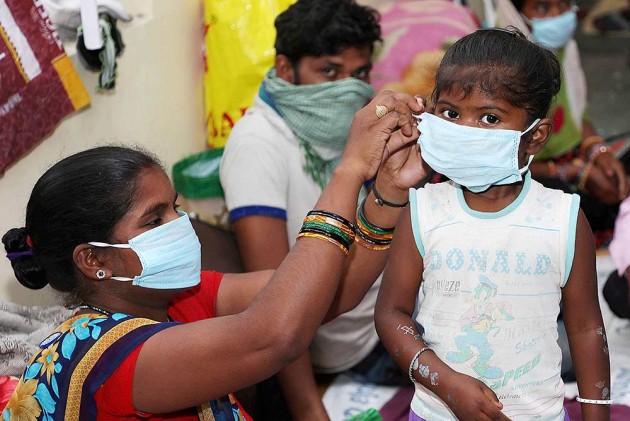 The Supreme Court on Tuesday directed the Centre and state governments to send all the migrant workers to their native places within 15 days and formulate employment schemes after conducting their skill mapping to rehabilitate them.

A bench of Justices Ashok Bhushan, Sanjay Kishan Kaul and M R Shah also directed the Centre to provide additional trains within 24 hours of states making the demand for sending the migrant workers back to their native places.

The top court also directed authorities to consider withdrawing all cases against migrant workers for alleged violation of lockdown norms under the Disaster Management Act.

The bench also directed the authorities to identify and register migrant workers who want to go back to their native places and conclude the exercise, including their transportation, within 15 days from Tuesday.

The bench, which posted the matter for further hearing in July, said the schemes for welfare and employment of migrant workers should be publicised adequately.

The top court, which pronounced its order through video conferencing, asked the state governments to consider granting counselling to migrant workers, who have returned to their homes, and provide them employment opportunities as per their skill sets.

The top court had on June 5 reserved its order on the suo motu case registered on the plights of migrant workers during the coronavirus-triggered lockdown period.

It had said that it intended to give 15 days to the Centre and the state governments for sending to native places all the migrant workers wanting to return home and they should be registered by the authorities for extending benefits of welfare measures, including employment opportunities.

The top court, which after taking suo motu note of the plight of such workers, had directed on May 28 that they should not be charged train or bus fare and should be provided food free of cost.

It had taken note of the submissions of the Centre and the state governments on steps taken so far to mitigate the miseries of the migrant workers stranded across the country during the nationwide lockdown.

The Centre has said it has done its "best" and that till June 3, over 4,200 'Shramik Special' trains have been deployed to transport migrant workers to their native places.

It had said till now, over one crore stranded migrant workers across the country have been sent to their destinations and most of the trains have ended up in Uttar Pradesh and Bihar.

The Centre had said that the state governments can inform as to how many more migrant workers need to be shifted and how many trains are required for that purpose.

Solicitor General Tushar Mehta, appearing for the Centre, had assured the court that trains required are being made available to the concerned states and they would be provided in the future as well, when demands are raised.

The law officer had said the Indian Railways has run 802 trains for transportation of workers from Maharashtra to various places in the country and moreover, if a state puts in a request for trains, then they are being provided within a day.

The counsel for states, including Gujarat, Delhi, Uttar Pradesh, Bihar, Karnataka, West Bengal and Kerala, had given data with regard to migrant workers.

"Out of 22 lakhs, 2.5 lakhs migrant workers are remaining," counsel for Gujarat had said.

The counsel for Delhi had said that now, less than 10,000 such people wanted to go back.

Counsel for the Uttar Pradesh government had said that over 100 special trains were used for transporting people back to the state from various parts of the country.

The Bihar government had said that 28 lakh migrant workers have returned to the state and the government has been taking steps for providing them employment.

The Kerala government had said that out of 4.34 lakh migrant workers, over 1 lakh have been transported so far. And 1.61 lakh wanted to remain in the state leaving 1.2 lakh such people who are yet to be sent back.

On May 28, the top court had directed that the migrant workers wanting to return to their home states will not be charged train or bus fares and those stranded across the country will be provided food free of cost by the authorities concerned.

Defacement Of Mahatma Gandhi's Statue Was A 'Disgrace': Donald Trump