The call for the march was given by the Jamia Coordination Committee, which asked anti-CAA demonstrators to gather at gate number 7 of the University. 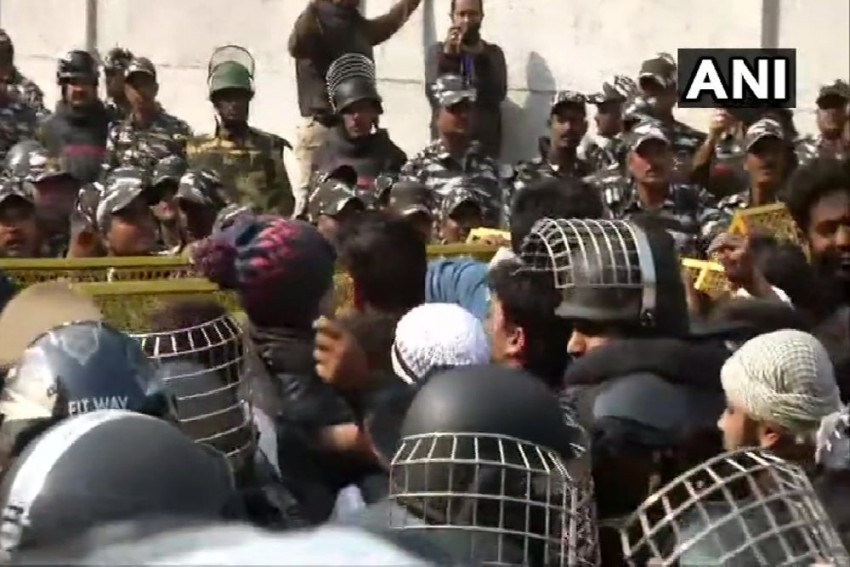 Delhi Police and other security agencies stop protesters from taking out a march from Jamia Millia Islamia to Parliament against the CAA and NRC. (ANI)
Outlook Web Bureau February 10, 2020 00:00 IST Delhi Police Stop Anti-CAA March From Jamia To Parliament 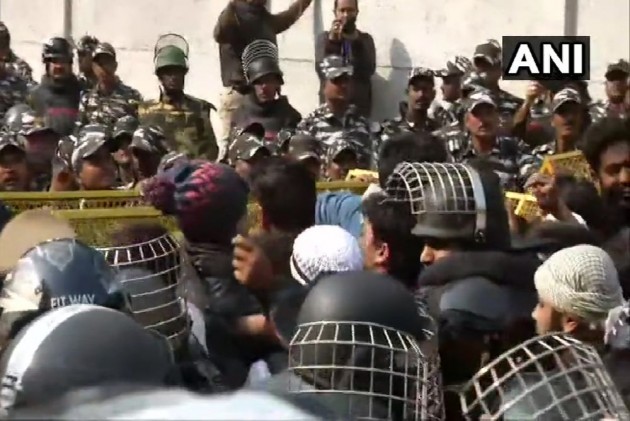 The Delhi Police and other security agencies on Monday stopped a large group of people from carrying out a march against the Citizenship Amendment Act (CAA) and the proposed National Register of Citizens (NRC) from Jamia Millia Islamia to the Parliament.

The call for the march was given by the Jamia Coordination Committee, which asked anti-CAA demonstrators to gather at gate number 7 of the University. The security forces, present in large numbers in the area, prevented the protesters from moving beyond Okhla's Holy Family Hospital, leading to a scuffle between cops and protesters.

The protesters raised slogans like "Kagaz Nahi Dikhayenge' (We will not show documents) and "Jab Nahi Dare Hum Goron Se Toh Kyun Dare Hum Auron Se" (When we did not fear the British, why should we fear others).

Men formed a human chain on either sides of roads as women walked ahead, waving the tricolour and raising slogans of "Halla Bol".

"It has been two months since we are protesting. No one from the government has come to talk to us, so we want to go to talk to them," said burqa-clad Zeba Anhad.

A scuffle ensued as policemen tried to stop the protesters. Many of them jumped over barricades to continue their march towards Parliament.

Jamia Millia Islamia proctor Waseem Ahmed Khan appealed to the students to disperse and not meddle with the police. "The message has been sent. I request students in the crowd to go back to the university. Respect the law and peacefully go back," he urged the students.

The police said that no permission had been granted to lead any such march on Monday.

The demonstration against the newly amended law and police's December 15 crackdown on university students has been on outside Jamia Millia Islamia for almost two months now.