Both leaders from Leh and Kargil leaving their earlier differences have come together to demand complete statehood to Ladakh. 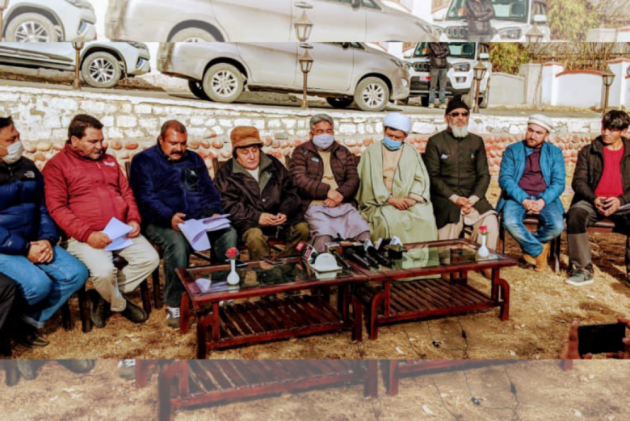 The recent decision of both Leh and Kargil unanimously vouching together for Ladakh’s statehood has evoked sharp response with sizeable section of the Buddhist majority in Leh feeling that the move could make them ‘subservient’ to the Muslim majority Kargil.

On August 5 this year, Leh based Apex body had joined Kargil Democratic Alliance (KDA) in demanding statehood to Ladakh. However, the Buddhist majority Leh holds the view that decision was taken without "consultations" which could make them politically "subservient" to Kargil.

Leh's concerns of becoming "subservient" to Kargil are primarily premised on the population profile. As per the 2011 census, the population of Leh is 133,487 and Kargil is 1,40,802.

Ladakh MP Jamyang Tsering Namgyal in his address, during a function to mark second anniversary of formation of Ladakh Union Territory in Leh on Aug 5, had said veteran leaders of Ladakh and Apex body are creating confusion by changing their demands consistently.

"In the last two years, Ladakh leadership changed its demands many a times. Earlier it demanded sixth schedule, then UT with legislature and now it's calling for complete statehood. It's creating confusion,"Namgyal had said.

The leaders from Kargil had opposed UT status to Ladakh in their meeting with MoS Home G. Kishan Reddy, held in New Delhi on July 1. The Kargil leaders had demanded restoration of Article 370, 35A and full-fledged statehood for Ladakh.

In September 2020, the Apex Body of People’s Movement (ABPM), an apolitical body of religious and social organizations from Leh, had earlier pitched for constitutional safeguards under sixth schedule of the Constitution to Ladakh on the lines of north-eastern states.

It had called for boycott of Ladakh Autonomous Hill Development Council (Leh) elections on this demand. The call was withdrawn after a meeting with home minister Amit Shah in Oct, 2020 who assured to look into this demand.

"Apex body made U-Turn without any consultation which is not acceptable. It wasn't discussed in general house of Ladakh Buddhist Association. We could become politically 'subservient' to Kargil. We didn't struggled so long for it," said Dorjey Shalak, member Apex body. Dorjey claims he was not invited to the meeting with KDA.

Leh and Kargil have long history of mutual distrust. Kargil was made separate district of Ladakh in 1979 during National Conference government. Leh viewed bifurcation as an attack on its composite culture and move aimed to create communal rivalries by NC to increase its imprint.

In 1980 as a counter move, agitation for separation of Ladakh from Kashmir was started. There was large scale violence and police had to resort to firing. Though, it didn't find any support in Kargil.

“Apex body had along demanded sixth schedule and got peoples' support for its call to boycott LAHDC election on this demand. Now, all of a sudden it changed track without consultation. Younger generation is brimming with anger. Leh residents have reservations and concerns that could become politically ‘subservient’ to Kargil. History reflects Kargil never supported Leh’s aspiration,” said ex Cong MLA Deldan Namgyal.

Leh and Kargil divided along religious lines have divergent political orientation and aspirations. . In 1989 massive protests were held in Leh for UT status and three people died in police firing. It didn't get support from Kargil and call for Kargil "boycott" was also given. LAHDC (Leh) was formed in 1995. Eight years later LAHDC Kargil was created. Leh residents hold the view Kargil didn't play role in these developments.

"People are feeling disempowered after UT status. Bureaucracy is ruling the roost and even BJP councilors in Leh had to sit on dharna to press for their demands. To address peoples' concern demanding statehood was unanimously decided. Bringing two regions on a common platform and putting up united front is a historic moment, said Sajad Kargili, member KDA.

He, however, maintains Art 370 was abrogated "unconstitutionally" and demanded its restoration.

Chering Dorjay, former BJP minister, member Apex body, said it was realized that under 6th schedule not much difference would be made from the present status of LAHDC Leh. He said once the statehood is given the elected representatives will have full legislature power.

"We realised things would remain same under the 6th Schedule with bureaucracy calling the shots. We can have full legislative power to frame laws for protecting our land, culture and jobs under Statehood. Some people have apprehensions that given demographic profile majority of times CM will be from Kargil, but than decisions are taken by Cabinet not the CM,"Chering said.