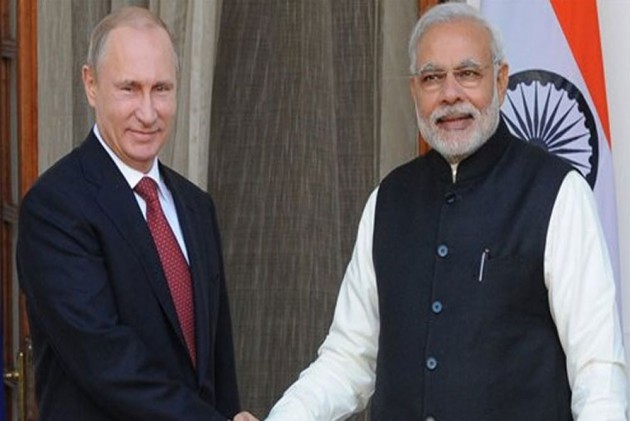 Prime Minister Narendra Modi has been honoured with Russia's highest state decoration, the Order of St Andrew the Apostle, for his role in promoting close ties between the two countries.

The award comes days after the United Arab Emirates announced conferring Modi with 'The Order of Zayed'.

The Russian government said Modi is given the highest state decoration of Russia for "exceptional services" in promoting special and privileged strategic partnership between Russia and India and friendly relations between the Russian and Indian peoples.

Taking to Twitter, PM Modi wrote: "Honoured to receive this prestigious award. I thank President Putin and the people of Russia....."

Honoured to receive this prestigious award. I thank President Putin and the people of Russia.

Foundations of India-Russia friendship are deep & the future of our partnership is bright.

Extensive cooperation between our nations has led to extraordinary outcomes for our citizens. https://t.co/4ppEC7ZAWe

President Putin remains a source of great strength for the India-Russia friendship.

Under his visionary leadership, bilateral and multilateral cooperation between our nations has scaled new heights.

A Russian official said the 'Order of St Andrew the Apostle' is awarded to prominent statesmen, public figures and those working in the fields of science, culture and arts in recognition of their exceptional services in promoting prosperity and glory of Russia.

The order can also be awarded to foreign heads of state for outstanding services.

The Order of St Andrew the Apostle is the highest order of the Russian Federation.

The award ceremony is usually held at the St Andrew Hall of the Grand Kremlin Palace.

The Order was established in 1698 by Tsar Peter the Great, in honour of Saint Andrew, the first apostle of Jesus and patron saint of Russia, said the official.

Between 1998 and June 2018, the award has been given to only 18 people, including weapons designer Mikhail Kalashnikov; writers Alexander Solzhenitsyn, Patriarch of Moscow and All Russia Alexy II; doctors Valery Shumakov and Boris Petrovsky; singers Lyudmila Zykina and Irina Arkhipova; choreographer Yuri Grigorovich; and former Soviet president Mikhail Gorbachev.