Resolve Kashmir Issue Through Dialogue, Not Through Collision: Erdogan

"One of the problems to which the international community still does not devote enough attention is the Kashmir conflict, which awaits a solution for 72 years," Turkish President Recep Tayyip Erdogan said. 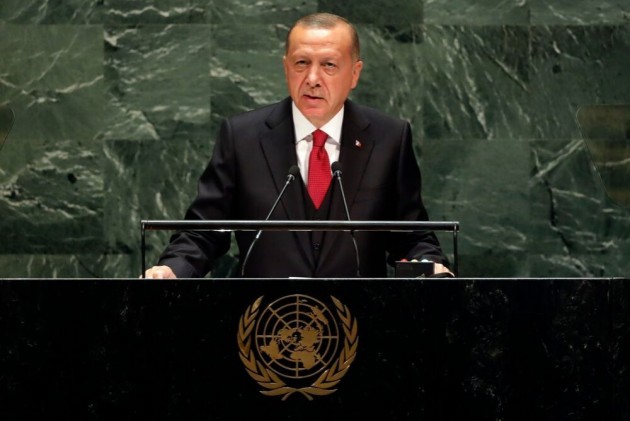 Turkish President Recep Tayyip Erdogan raised the Kashmir issue during his address at the United Nations, saying it is imperative to solve the problem through "dialogue on the basis of justice, equity, and not through collision."

Turkey is the only Muslim country to have supported Pakistan after India revoked Article 370 of the Constitution, which gave special status to Jammu and Kashmir on August 5.

In his speech before at the UN General Assembly, Erdogan said the stability and prosperity of South Asia cannot he separated from the Kashmir issue.

"One of the problems to which the international community still does not devote enough attention is the Kashmir conflict, which awaits a solution for 72 years," he said in his address to the General Debate here on Tuesday.

He added that in order for the "Kashmiri people to look at a safe future together with their Pakistani and Indian neighbours, it is imperative to solve the problem through dialogue and on the basis of justice and equity, and not through collision."

Earlier in the day, Prime Minister Khan met President Erdogan on the sidelines of 74th session of the UNGA and discussed with him bilateral relations and the latest situation since India revoked the special status of Jammu and Kashmir.

India has always maintained that Jammu and Kashmir is its integral part and ruled out any third party mediation, including either from the UN or the US, saying it is a bilateral issue with Pakistan. The Secretary General has also repeatedly asserted that his good offices are available only if both sides ask for it.