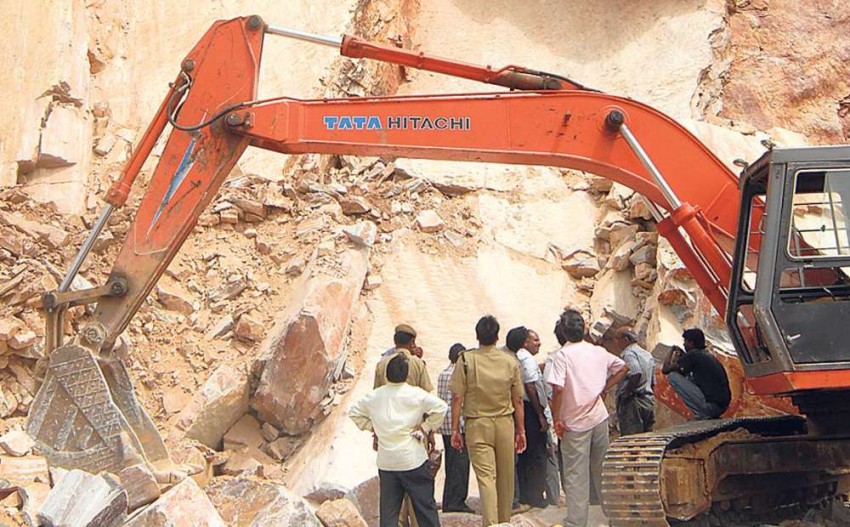 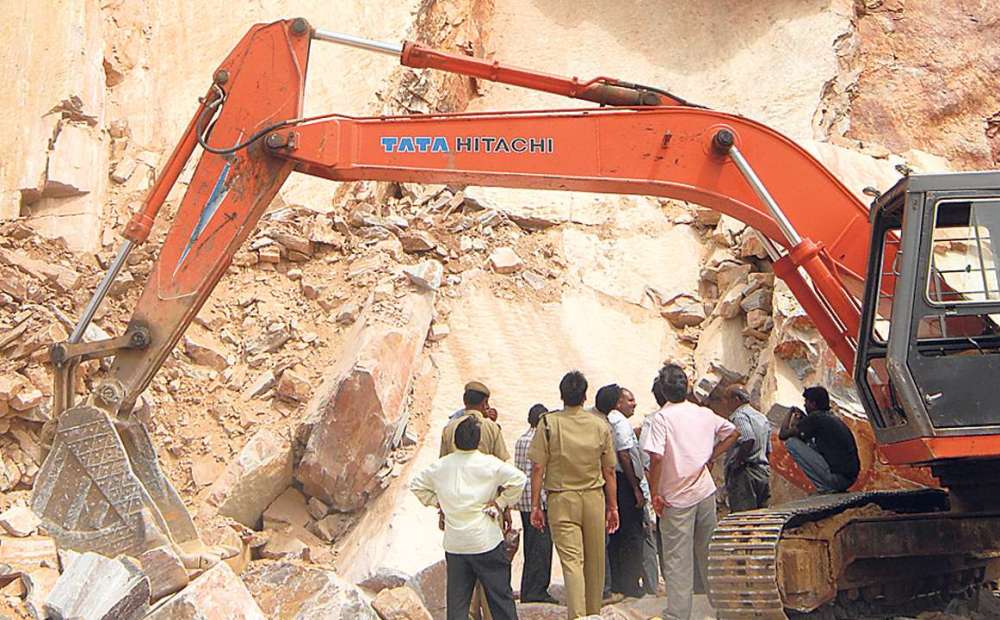 Ever since the country went into a lockdown on March 25 to contain the spread of novel coronavirus, Papla Ram, 44, a mine labourer in Jodhpur’s Balesar, has been out of work. "I am at home since March and there is no other work I can do. All my savings are exhausted now,” says Papla, who, otherwise, would have 20 days’ work every month, and for eight months a year. When he worked, he comfortably made something between Rs 6,000 and Rs 7,000. “I have a family of seven and it has become difficult for us to sustain with no wages."

Rajasthan, the biggest state in the country geographically, has 0.5% of its area under mining. It has over 33,000 mining leases, the highest in the country, and they include leases for major minerals, minor minerals, and quarry licenses. A majority of these are sandstone mines and quarries operating in unorganised manner and at a small-scale level. The major sandstone mining sites are located in Jodhpur, Bundi, Alwar, Bharatpur, Karauli and Bhilwara districts. Mining and mineral processing industry is a major employer in 19 out of 33 districts of the state with as many as three million people being employed directly or indirectly.

Following an advisory by the home ministry, the state government allowed resuming the work at mining sites from April 20. But with a lot of labourers having gone back to their native places and no transport for those living nearby, much of the work remains. "The mining site is 35 km from my home. It is impossible for me to join the work as there is no transport facility for us in the lockdown. None of the workers from our village are able to go to work,” adds Papla. There is no government welfare or relief measure either that he can look up to.

What troubles him even more is the differential treatment meted out by the government to mine labourers vis-à-vis construction labourers. “My neighbour is a construction labourer. He also stopped working since March. The government gave him Rs 2,500 and free ration. But for us, there is no relief from the government,” says Mohabbat Ram, another mine labourer from Jodhpur. Papla and Mohabbat are not alone. There are thousands of others who are struggling to make ends meet owing to no work or government support.

During the first lockdown, the Congress government in the state announced a one-time compensation amount of Rs 2,500 to registered construction workers, street vendors, below poverty line families, and other needy families who are not covered under social security pension scheme. The measure, however, did not take mine labourers under its wings.

Those working for the rights of the mine labourers in Rajasthan blame the state government for lack of planning while allocating the District Mineral Foundation Trust (DMFT) funds. The DMFT is a non-profit body created in 2016 to work for the interests of mine labourers. “This is the time when mine workers needed help from government and state machinery could have done it by spending DMFT funds on them through cash and kind,” says Rana Sengupta, managing trustee of Mine Labour Protection Campaign Trust.

Welfare of mine workers should be on demand especially when they had promised it in pre poll rallies, he adds. Furthermore, he says that the government’s inability to utilize the fund for affected people emphasizes the need of constituting a body. "The government should make a board specifically for the purpose of identifying issues in each mining-affected area, and then funds should be allocated for the infrastructural development and healthcare facilities for 25 lakh mining labourers in the state.”

According to the mining department's reply to an assembly question by BJP MLA Kiran Maheshwari in February 2020, the DMFTs have a total remaining deposit of Rs 2,755 crore. In 2018-19, the total funds deposited in the various DMFTs were Rs 933 crore while in 2019-20 (till January 31) the figure was Rs 863 crore. However, despite the accumulated funds with the DMFTs, out of the Rs 1,420 crore sanctioned for the 8,550 projects, only Rs 676 crore has been spent from which only 3,325 projects have been completed.

The funds with the DMFTs are used to implement various developmental and welfare projects meant for mine workers and local villagers affected by mining. In February, the mining department revealed – in response to another assembly question by BJP MLA Sandeep Sharma – that only one-third of the sanctioned projects has been completed under DMFT fund.

While the state government lags in both completion of projects as well as using funds for protection of labourers, data shows that its revenue from mining has gone up in the previous few years. The total revenue in 2016-2017 was Rs 4,234 crore, which increased to Rs 4,522 crore in the following year, and subsequently to Rs 5,301 crore in 2018-2019. This data was provided by the government in response to a question by BJP legislator Hameer Singh Bhayal in the assembly.

Asked about the welfare measures being taken for mining workers, Kunji Lal Meena, principal secretary of the mining department, says, “As of now no such welfare scheme has been announced. Work has resumed at most of the sites. And as far as arranging of transport for workers is concerned, it is the duty of the mine owner.” He adds that mine owners have been cautioned to ensure use of masks, sanitisers, and implementation of social distancing norms at work sites.

There are about 5-6 lakh labourers employed directly on the sites, while an additional 15-16 lakh are employed indirectly by the mining sector, Meena says. As regards the usage of DMFT funds, he says that as per a new provision, 30% of the fund can be utilized on medical expenses of the labourers. “The district collector has to take a call on this. However, there is no provision of paying cash to anyone.”

"My husband is suffering from Silicosis. It was confirmed in October last year but so far there has been no help from government. I have to take care of him as well as my four kids. I divide my day between work and home but it’s getting very difficult to manage,” says Prema Devi from Jodhpur. Her husband Gayad Ram is surviving on oxygen cylinder since August last year. He worked in mines for 20 years until he was taken by silicosis; a medical board certified him as a silicosis patient in October. “District administration promised that one-time money and pension will start flowing in our account from March onwards. But after the lockdown there has been no word from them.”

Data from the Jan Soochna Portal of Rajasthan government shows that 86,196 persons have registered for medical verification of silicosis across the state from 2016 till date. Of the said number, 15,762 have received the silicosis certification while 14,909 cases are pending at the community health centre level and 2,819 are awaiting a nod from the medical board. Of those who have received the certification, only about 50% have got the silicosis allowance.

With no income during the lockdown, those not receiving the allowance have their backs against the wall. “We have been requesting the government to speed up the cases. They need urgent help. Some of them are critical and may die without any support. Since most of them are prone to lung disorder, it makes them even more vulnerable,” says Senupta, who along with his team has started mobile oxygen vans during the lockdown for the patients. As of now such oxygen vans are available in Jodhpur and Bhilwara areas, the areas most affected by silicosis.

Giving an overview of the hardships faced by patients in Ajmer district, Vikas Bharadwaj, a social activist, says that it’s during the usually lengthy process of detection of disease and disbursing of money that most of silicosis patients die. “Out of 1,000 cases in Ajmer, only 300 cases have received pension money. Rest of the patients are still waiting and two of the registered patients died during this lockdown without getting a penny,” he adds.

Explaining why the silicosis certification process is in doldrums, mining principal secretary says that due to covid-19 pandemic all major activities have been hit. “The process was ongoing before the lockdown was imposed. Those who have received certificates are getting Rs 1,500 per month. However many are yet to receive and it will be done once this situation abates.”

(Tabeenah Anjum is a journalist and photographer based in Jaipur. Formerly the state correspondent of Deccan Herald, she has covered Rajasthan for over 10 years.)