For years, Debanjan Deb’s relatives and neighbours at a south Kolkata residential complex knew he was an IAS officer serving as an assistant commissioner at the Kolkata Municipal Corporation. He had a car with a blue beacon. His social media account was full of photos with influential politicians and bureaucrats.

But perhaps the biggest achievement of this 28-year-old was in getting his name inscribed on a plaque alongside the names of the local MP and the MLA in north Kolkata where Deb was described as a ‘joint secretary’ of the West Bengal government. The plaque was below a half-bust of Rabindranath Tagore unveiled in February this year at Taltala area in North Kolkata at the initiative of a library. The plaque had the name of the local MLAs, Nayna Bandyopadhyay, MP Sudip Bandyopadhyay, Kolkata’s deputy mayor Atin Ghosh, municipal affairs minister Firhad Hakim and deputy minister for parliamentary affairs, Tapas Roy, apart from Deb and a social worker.

Perceivably at unease with his photo with Deb emerging on social media, Trinamool Congress (TMC) Rajya Sabha MP Shantanu Sen on Friday morning took to social media for a clarification.

“Debanjan Deb, fake IAS is the talk of the town, whose photos with many, including me, are being shown in many electronic channels & social media. So far as I recall, during first phase of Covid, many organisations & individuals voluntarily donated masks, sanitisers, gloves, PPE kits etc to Indian Medical Association for distribution amongst several Hospitals, Doctors & other Institutions & this man might have been one of those who came individually or with others introducing himself as a social worker not as an IAS,” Sen wrote in a Facebook post. 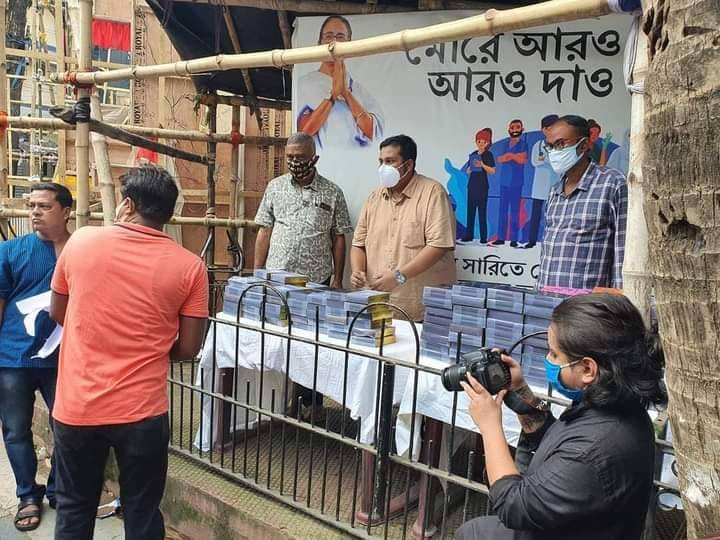 Deb was arrested on June 23 after the TMC’s Jadavpur MP, actor Mimi Chakraborty alarmed the Kolkata Municipal Corporation (KMC) authorities about a fake vaccination racket she suspected to have fallen prey to. Two days earlier, the actor took her vaccine jab at the ‘vaccination camp’ organised within ward 107 of the Kolkata Municipal Corporation (KMC) but became suspicious after she received no update from the government.

Strangely enough, the final ‘project’ that led to his unmasking was a vaccination drive for which no one was charged a penny. Neighbours at the residential complex used to queue up for the vaccine, while shopkeepers at Kasba new market alleged that Deb, introducing himself as a KMC joint commissioner, threatened them with the closure of shops if they did not take the vaccine.

This is where the police were still in the dark, as of June 25, about his motive behind organising this fake vaccination drive for free. It has been found out that more than 1,500 persons were administered the ‘vaccine’ over a week at Kasba area. Besides, he had also organised a free vaccination camp at City College in north Kolkata on June 18 when 80 teachers and students took the jab. The college authorities lodged a police complaint on Friday.

“At this stage, it’s puzzling why he was conducting ‘vaccination’ for free for so many people. There must be more to it. We have already received a complaint that Deb had sold 171 ‘vaccines’ to a microfinance for 1.11. They were either not vaccines or obtained illegally,” said a police officer aware of the developments of the investigation.

“It appears from his modus operendi that he took up this so called free vaccination drive to build rapport with more influential people whom he could later use to dupe more people,” the officer said.

A zoology graduate from Charuchandra College in Kolkata, he dropped out of a course in genetics at the Calcutta University. There are unconfirmed reports that he had appeared in the UPSC exam but failed.

Fake rubber stamps and letterheads of the KMC and fake labels for vaccine vials has been recovered from his place.

Deb had started a business of mask, sanitisers and PPE kits as soon as the pandemic started last year. Gradually, to build rapport with politicians and bureaucrats, he started donating masks, sanitizers and PPE kits, often in the presence of public representatives. Before politicians, he used to introduce himself as a social worker, while before the public he introduced himself as an IAS.

According to Rashid Munir Khan, deputy commissioner of Kolkata’s south suburban division, Deb’s father is a retired deputy excise collector of the state excise department. “Deb informed his father in 2017 that he had become an IAS and started using a car with a blue beacon,” Khan said.

“The KMC commissioner had lodged a complaint with the police. An internal probe will also be conducted. Appropriate measures will be taken if anyone within the KMC is found to have helped him,” said Firhad Hakim, Kolkata’s former mayor and present head of the board of administrators.

The KMC has started a drive to trace all recipients of the jab to find out ill effects on health. “It has been found that most of the people were administered with an antibiotic named Amicasin 500,” said a senior official at the KMC on condition of anonymity. He added that so far, no one has been found to have any adverse reaction but most of them were suffering from panic attack since the news reached them.

The BJP's Bengal unit president Dilip Ghosh alleged on Friday that the Deb could not have gone so far without indulgence from the ruling party leaders. Union minister Babul Supriyo, too, took digs at the state's ruling party by sharing photos showing Deb alongside TMC MLAs, MPs and ministers.

The CPI(M), too, alleged that this could not have happened without the involvement of the ruling party's leaders.

Meanwhile, the police on Friday arrested one of his alleged cohorts. "We have zeroed in on a dozen of KMC health department workers whose involvement was found in connection with the fake vaccination drive. More information will come out once with speak to them," a senior police officer said. The police are also expecting more complaints from people he might have earlier duped.