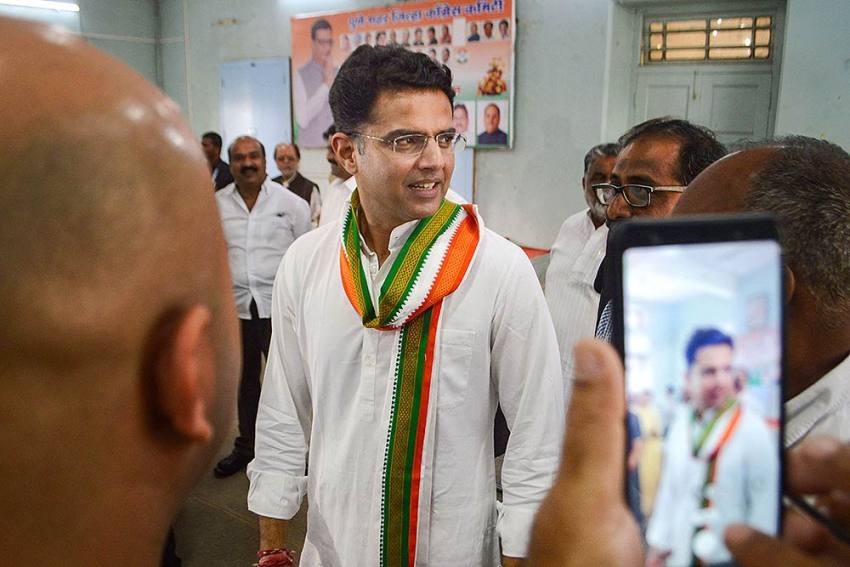 Amid the factional feud in Rajasthan Congress, leaders close to Sachin Pilot are camping in New Delhi for the weekend for strongly pressing their demands before the party’s high command saying they are losing patience over the long wait for getting their due in the state government.

An All India Congress Committee (AICC) panel formed to sort out differences between Chief Minister Ashok Gehlot and the Pilot camp is yet to come up with a solution.

AICC in-charge of the state Ajay Maken on Friday had said, "Vacant positions in the Cabinet, Boards and Commissions would be filled soon and we are in talks with all."

When asked if senior party leader Pilot is angry, Maken had said, "I am speaking to Pilot ji on a regular basis. Had he been angry, he would not be speaking to me."

Leaders close to Pilot, who is in Delhi for the weekend, said they are losing patience over the long wait for getting their due and claim they are being "pressured" by Chief Minister Gehlot to leave Pilot's side.

However, they asserted that they will fight "for their rights" within the party framework.

According to sources within the Pilot camp, the former Rajasthan deputy chief minister is regularly in touch with Maken for ironing out issues and for redressal of grievances.

When reached out for a comment and asked if he would meet senior Congress leaders here, Pilot refused to comment.

Sources close to Pilot said the delay in the redressal of grievances as promised by the party high command was irking the leaders associated with him, and alleged that the chief minister is refusing to give them their due.

The Congress government in Rajasthan was on the verge of collapse after Pilot along with 19 disgruntled MLAs raised a banner of revolt last year.

Hectic consultations with rebel leaders led by Pilot helped the Congress save its government and its state unit from a division.

Pilot on Friday rejected a claim made on a television show by BJP leader Rita Bahuguna Joshi that she had spoken to him about the possibility of joining the BJP.

"Rita Bahuguna Joshi said she spoke to Sachin. She might have spoken to Sachin Tendulkar (the cricketer). She doesn't have the courage to speak to me," the Congress leader had told reporters in Jaipur during his party's protest over fuel prices.

Also, Congress MLA Hemaram Choudhary met Pilot in Jaipur on Friday morning, his first public visit to the state capital after sending in his resignation to Speaker P C Joshi on May 18.

Pilot loyalist P R Meena on Friday called for an expansion of the Gehlot ministry.

"The party high command should take a decision at the earliest because everyone is waiting," he said.

Meena had asserted that he is strongly with Pilot and "would even die" for him.

On Thursday, over a dozen Congress MLAs had met Pilot at his Jaipur home, sources said.