Large scale and continuous migration through a porous border, primarily in the quest of land and Government sponsored benefits, is the primary cause and has seen an exponential increase since the 1980s, particularly Assam being the easiest place to get any proof of citizenship 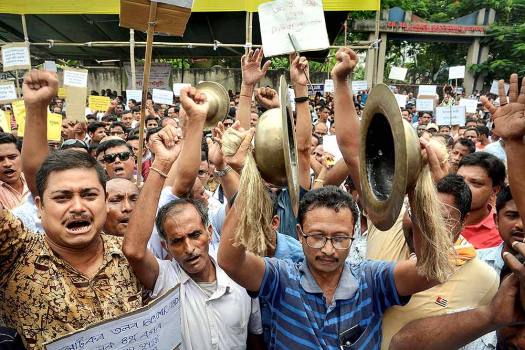 The national debate and discussion on the National Register of Citizens (NRC) have been focused on the fate of those likely to be excluded, their rights and remedies. There is virtually no discussion as to why NRC was necessitated and for whom?

Large scale and continuous migration through a porous border, primarily in the quest of land and Government sponsored benefits is the primary cause and has seen an exponential increase since the 1980s, particularly Assam being the easiest place to get any proof of citizenship. The estimates of the number of infiltrators has shown a consistent increase over time (1992 – 32 lakhs – State Government, 2004 – 50 lakhs – UPA Government, 2016 – 80 lakh – NDA Government) and they comprise over 25% of the population (3.11 crores – population of Assam – 2011 census).

These are only post 25th March, 1971 migrants, as infiltrators in Assam after Independence and upto this date are granted citizenship (unlike the rest of India) which would be an additional 10% of the population. Three independent studies have estimated that by 2040 to 2051, the indigenous people in Assam will become a minority under the weight of Bangladeshi influx. The Northeast and Assam are a treasure trove of ethnic diversity, out of 525 ethnic communities in India, 240 alone are in the Northeast and Assam has 115. The sizes of such communities vary from 5000 (Tai Phake, Tai Khamyang etc.) to 60 lakhs for Koch Rajbongshis (the largest ethnic group), but all of these communities individually and collectively face a threat of extinction at the hands of the Bangladeshi immigrants.

Indigenous communities are unable to face the combined might of Bangladeshi aggressors, who have overrun large parts of lower and middle Assam endangering even large communities like Bodos, Rabhas, Koch Rajbongshis etc., facing large scale displacement from their traditional homelands.

The NRC from all indications will exclude less than 20% of all the foreigners staying in Assam, which will legitimise Bangladeshi infiltrators becoming permanent citizens and subsequently turning into a majority. Thousands of instances, reported in the local press on a daily basis have shown large scale subversion of the NRC process by the immigrant population, but self-serving political leaders’ eye locked on their vote banks have turned a blind eye.

Like a typical bureaucratic process, while the NRC procedure looks perfect on paper, but is riddled with flaws is evident from two glaring facts – exclusion from NRC draft in border districts (which have seen the highest population growths) is far lower at an average of 7.5% against a state average of 12.15%. Those who have been declared foreigners through an adjudication process by the Foreigner Tribunals have however passed the citizenship test in the administrative process under the NRC. About two months ago, the NRC authorities excluded a further 1.2 lakh persons from the draft NRC as these persons were either declared foreigners adjudicated by the Foreigner Tribunal or their descendants, demonstrating failure of the NRC in identifying even those who have been adjudicated to be foreigners.

The only means to protect indigenous people, to the extent possible is to take a leaf out of other North-eastern states who are protected from such infiltration by virtue of legal regimes reserving land, trade opportunities, jobs and other resources for the local indigenous population acting as a disincentive to economic migration from Bangladesh. As a Commissioner appointed by the Supreme Court in 2015 on the State of Border and Infiltration from Bangladesh, I had strongly proposed and recommended that the only means of protecting the indigenous population in Assam is through a protective legal regime reserving land and resources for them.

(The author is a Supreme Court lawyer and court appointed one-man Commission for Indo-Bangla border. Views expressed are personal.)