As Covid-19 cases surge in the country, crossing one lakh daily infections, some states have complained of vaccine shortage, which they fear, will lead to rising in cases.  At least six states – Andhra Pradesh, Chhattisgarh, Haryana, Odisha and Telangana – are staring at a coronavirus vaccine shortage.

India reported a record 115,736 new Covid cases on Wednesday, a 13-fold increase in just over two months, raising pressure on the government to expand its vaccination campaign.

Explained: Is It Safe For Pregnant Women To Get The Covid-19 Vaccine?

Bogged down by the second wave of Covid-19, Maharashtra is now left with only three days of vaccine stocks. The state is also plagued by a shortage of oxygen and medicine to combat the surge, as it sees above 50,000 new infections daily, Health Minister Rajesh Tope said on Wednesday.

"We have around 14 lakh doses left available... That is the stock sufficient for only three days. Our weekly requirement is around 40 lakh doses to enable us to vaccinate up to 500,000 people. In the current surge, the vaccine is the only 'Ram-baan' available," a grim Tope told media persons here this afternoon.

He said that he has already informed Union Health Minister Harsh Vardhan of the prevailing scenario at a video conference of the Health Ministers of nine worst-hit states.

Owing to the shortage of vaccines at various vaccination centres, the people are being sent back and the state has demanded that people in the vulnerable 20-45 age groups should be given the life-saver jab on priority, he said.

Odisha's Covid-19 tally rose to 3,44,647 on Wednesday as it reported 791 new cases, the highest spike this year, even as the state government halted inoculation drive in 700 centres due to shortage of vaccines and moved the Centre seeking immediate supply of 25 lakh Covishield doses. 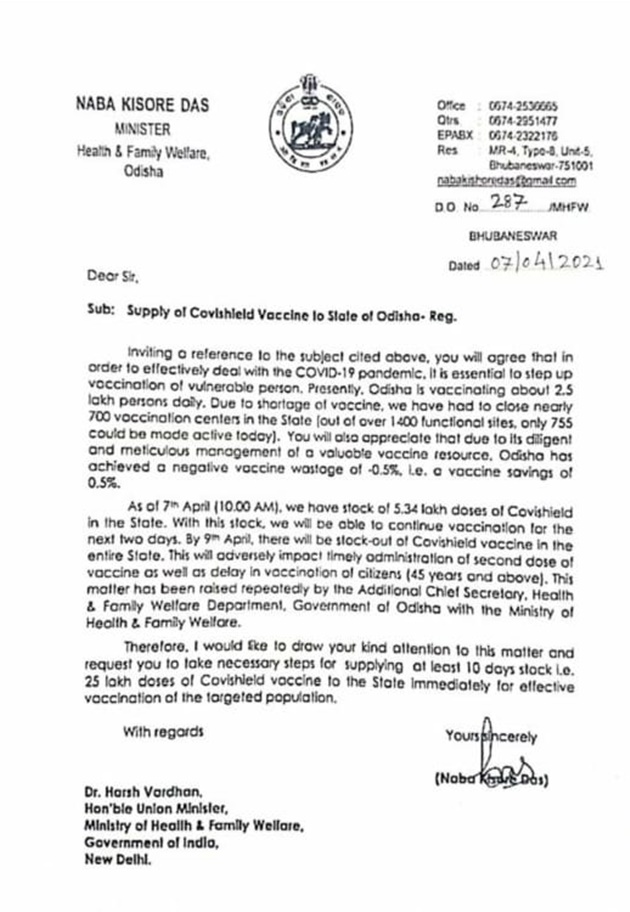 Indore in Madhya Pradesh has been facing a shortage of remdesivir injection used for treating coronavirus patients, with the authorities saying that as against the daily demand of 7,000 vials of the anti-viral drug in the district, they are getting less than half that number at present.

Additional District Magistrate (ADM) Abhay Bedekar said, "Currently, about 3,000 vials of remdesivir injections of different pharmaceutical companies are coming to Indore every day, while its daily demand in the district is around 7,000 vials. So, only half the supply is being met as against the actual demand," he said.

In Andhra Pradesh, vaccine stocks will run out by Thursday, the state’s commissioner (health and family welfare) Katamneni Bhaskar said. He said the state has only 3.5 lakh vaccines left in their stock.

Telangana’s Health Minister Eatala Rajendra said the state has vaccine stock that will be sufficient for the next three days. He added that the state can vaccinate 1 lakh people daily but is inoculating around 60,000-70,000 due to supply shortage.

Chhattisgarh ran out of stocks and could vaccinate only 20,000-30,000 people on Monday, reported ThePrint. However, it has now got a fresh batch of 3,25,000 doses, said state Health Minister TS Singh Deo. Earlier, the state was inoculating around 3 lakh people daily.

The state government has said that it has around 5 lakh doses of Covishield but only 53,000 jabs of Covaxin. “We inoculate 1,00,000 people per day and we have enough Covishield vaccine doses for the next four days,” the secretary of the state’s health ministry, Rajeev Arora, told The Economic Times.

The Centre has refused to open up coronavirus vaccinations for all age groups, saying that the aim is to vaccinate the most vulnerable first.

Hours after Maharashtra and Andhra Pradesh sent an SOS alert over a scarcity of coronavirus vaccines, the Union Health Ministry reiterated on Wednesday that there is no shortage of vaccine stock anywhere in the country.

Dr Harsh Vardhan had reacted to some concerns on Tuesday, adding that “no state is facing vaccine scarcity” and neither will the Centre allow them to face it.